MEMORIAL. The fallen nationalist Daniel Wretström was honoured by activists across Sweden on the anniversary of his passing. 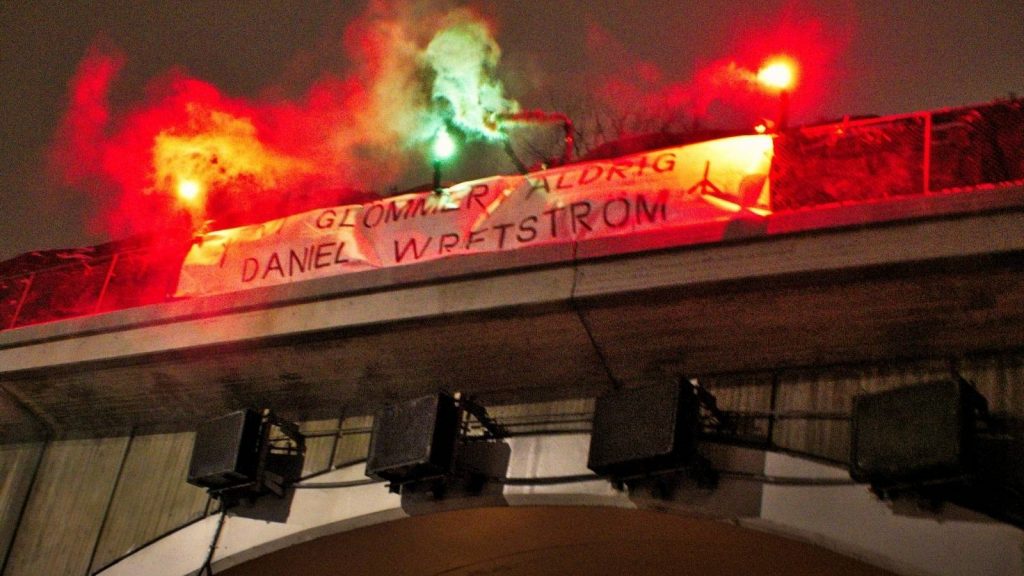 On Thursday 9 December, activities took place in a series of locations in Sweden to honour Daniel Wretström. Participating were activists from the Nordic Resistance Movement, independent National Socialists and nationalists from other groups.

It was on 9 December 2000 that the 17-year-old Swedish nationalist was assaulted and tortured to death by an immigrant gang in a bestial attack in Salem. When Khaled Odeh dealt the fatal knife blows, Daniel lay defenceless on the ground after having been hit repeatedly with a wooden plank. Finally, Odeh cut off the already-deceased boy’s head with the knife.

Each of the murderers was sentenced to community service and a fine of just 1,500 SEK. When the perpetrators left the crime scene, they were reported to have chanted “Smash racism!” This came just days after the traitorous Prime Minister Göran Persson had declared he would “smash nationalists” – a sentiment that was likely his most important political promise and the basis of his political agenda.

Comrades gathered on Thursday afternoon in Stockholm to conduct their customary tribute to the fallen nationalist Daniel Wretström on the anniversary of his death. The evening began with an action on a bridge over the busy Essingeleden motorway, where a banner was put up. Flares and smoke grenades were lit and illuminated Daniel’s name strikingly in the winter darkness, in the view of homebound Stockholmers.

The activists report numerous appreciative reactions from passing drivers, who beeped their horns, waved and hailed. After the pyrotechnics had burned out, the comrades concluded this first activity of the evening. The banner was left in place, where it remained for almost 24 hours, to be seen by thousands more motorists.

Next, the comrades travelled to Salem, a town a few miles south of Stockholm, where Daniel was killed by a mob chiefly consisting of racially alien invaders. In the middle of the community, a banner was fastened to a footbridge over one of the most central roads.

To conclude the evening, the company went to the site of the murder for a short memorial service. A banner was also placed here with the same message, alongside lighted candles. Several drivers slowed down to see what was happening, and a couple got out of their cars to express their sympathy and photograph the banner. Finally, a minute’s silence was held, after which the words “Daniel Wretström – Present!” echoed through the air.

Daniel, your life may be over – but your memory lives on!

Activists gathered in the afternoon in the middle of a wintry Västerås, before travelling to some well-trafficked places, where the maximum number of road users would see their banners.

After banners were hung up in a number of places, the activists conducted an extended action for several hours with a banner and flags during rush hour on the E18 motorway. The activists report numerous positive reactions, including horn beeps and salutes from passing drivers and passengers.

A woman of unclear ethnic origin approached the activists on the bridge and wanted to discuss the message on the banner. To the comrades’ surprise, she broke off the conversation suddenly after a while and left the area chanting “Race war!”

On this occasion, the police contented themselves with approaching and asking one of the activists what was on the banner, as well as expressing concern that it might be dropped from the bridge. In response, the officer was informed that the activists are made of strong stuff – information that seemed to put his mind at ease.

Long after darkness fell, the rush hour traffic began to thin and the comrades moved to Sura Church and its cemetery in the town of Surahammar. Daniel Wretström was honoured by his graveside with flowers and lighted candles. A short speech was held, with the words resounding over the snow-covered cemetery.

…Today is the anniversary of Daniel Wretström’s death. We are the Nordic Resistance Movement, and we demand revenge. Comrades, the dead are calling us to battle.