Let our children be children!

The Nordic Resistance Movement cordoned off the library in Vallentuna and put up posters on its entrance on 1 November. The activity was conducted in response to a planned drag queen “story time” on 7 November, during which transvestites would sit children in their laps and read fairy tales to them. The event’s organiser wanted to see a “transgender transformation” in the young children, and for them to question their identity.

The Nordic Resistance Movement regards the indoctrination of young children with this message to be totally unacceptable and criminal. We therefore cordoned off the library and warned the public via a message on the posters.

Approximately 200 leaflets were delivered in the Kallkällan area of Luleå on Saturday, 31 October. Several more activities are planned for the coming days. 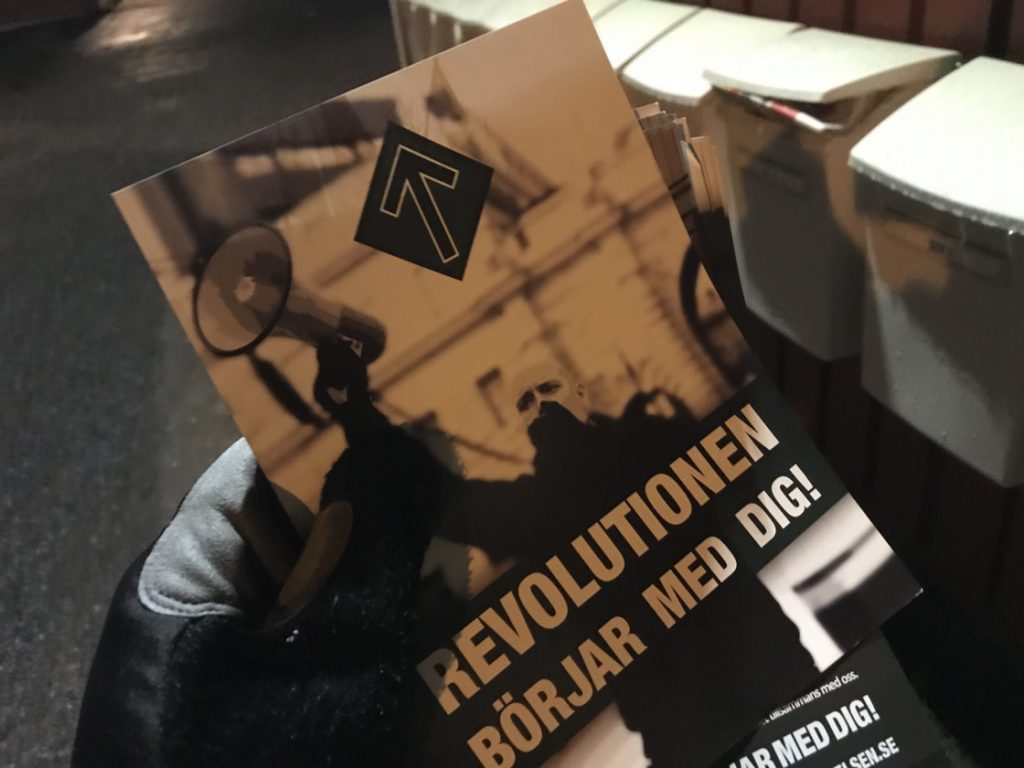 Members and sympathisers took part in a wilderness activity outside Sundsvall on 31 October.

The comrades made camp on a mountain with a sea view, building a fire, sleeping places and a rain shelter. They then explored the nearby area, with its interesting rock crevices and cave formations that were formed at the end of the last ice age, approximately 10,000 years ago.

During the trip, the participants also tested some newly purchased and donated gadgets and tools, including a small but effective machete, a survival shovel, a multi-tool and a tactical axe.

The night was relatively warm and calm and saw both intrusive snails and curious deer come to the camp. After a good sleep and an excellent breakfast, the camp was dismantled and the march back began.

All of the participants greatly enjoyed the excursion and agreed that nature is an invigorating medicine for the soul!

A large number of stickers were placed in central Norrköping on Friday evening. The propaganda was put up in Folkparken, Marielund and the university area. The streets were also cleansed of communist propaganda.

Comrades from Nest 1 met to continue their studies of Adolf Hitler’s Mein Kampf on Sunday afternoon. This week they discussed the fourth chapter, which includes some of Hitler’s political observations of Vienna. Many similarities with today’s Sweden were found in this chapter, but there were also differences, which, like Hitler’s reflections, led to interesting political and ideological discussions.

Mein Kampf is an important document for anyone interested in politics or history and can be purchased at Greenpilled.com. 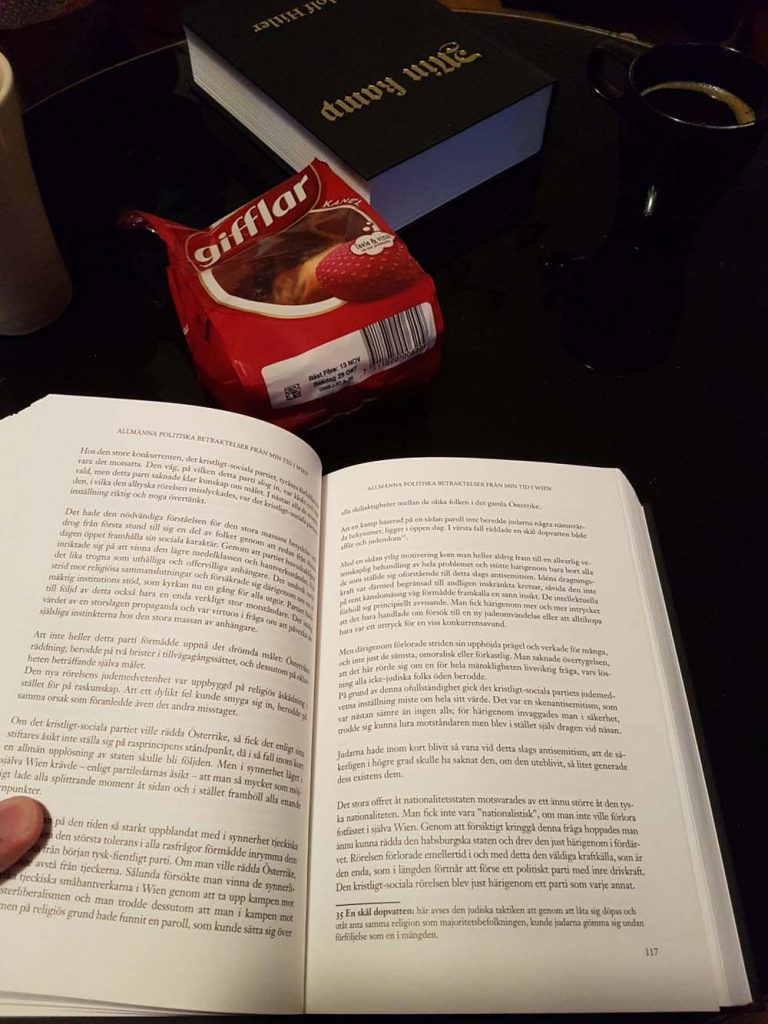 Leaflets informing people about anti-Swedishness and the many victims of multiculturalism were delivered to residents in the Östanå area of Vetlanda by Nest 7 on 5 November. 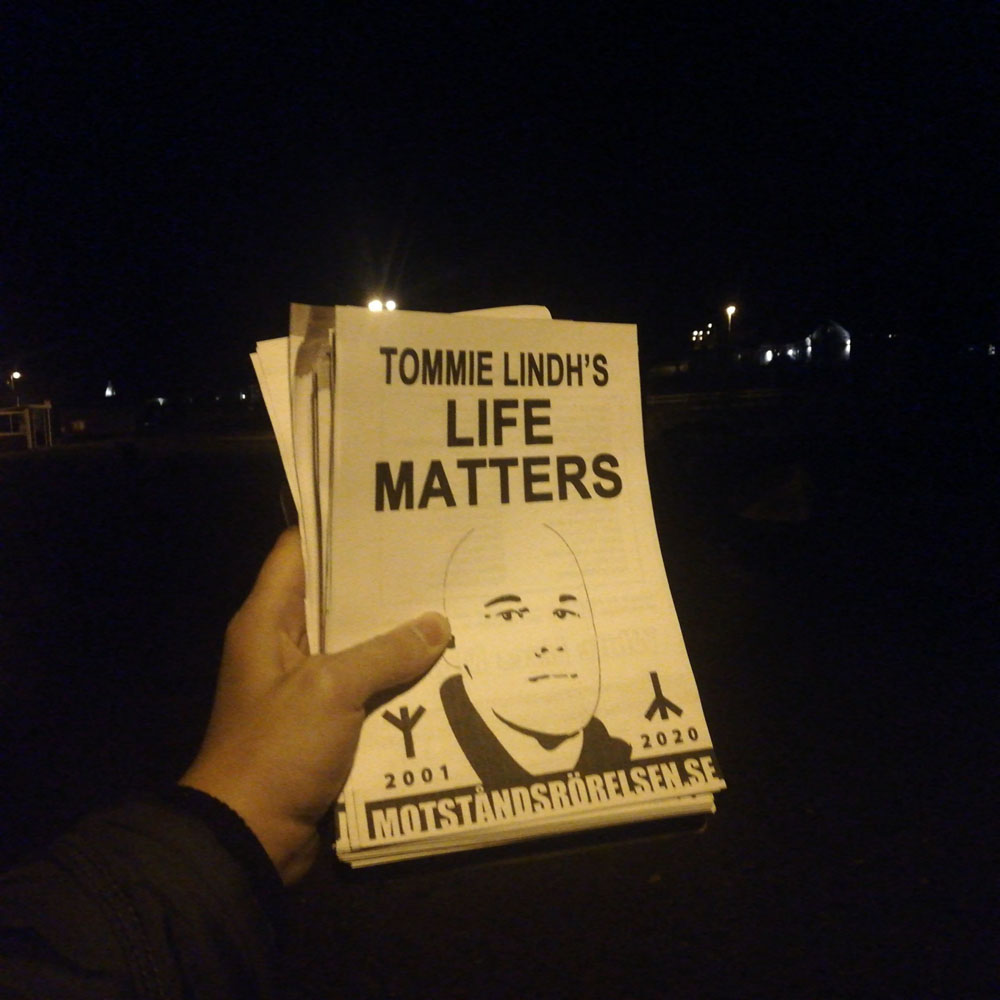 Stickers and posters in Borås

Posters were put up in the Frufällan area outside Borås on the afternoon of 5 November. Frufällan was recently the scene of a shooting of a 16 year old by two men with a shotgun, which Nordfront reported on.

Afterwards, stickers were placed in Göta, a more central area, which, apart from housing a grotesque left-wing extremist, also has big problems with shootings and bombings.

The activity passed without problems and was enjoyed by the participants.

Members from Nest 8 were in central Örebro to put up White Lives Matter posters on Friday evening, 6 November.

A large number of informational stickers were also placed along busy main streets.

Members delivered leaflets and put up posters in what are now multicultural areas in Vetlanda between 4 and 5 November.

Halden was enriched with healthy National Socialist information during the polar night.

Members of Activist Group 302 spent an evening distributing leaflets informing people that the area is a National Socialist zone – now and forever!

Stickers and posters in Bore

Nest 6 put up a large number of stickers and posters at car parks at Bore beach.

Leaflets and posters spread in Randers

Activists delivered leaflets to addresses in Randers and put up posters in the area.