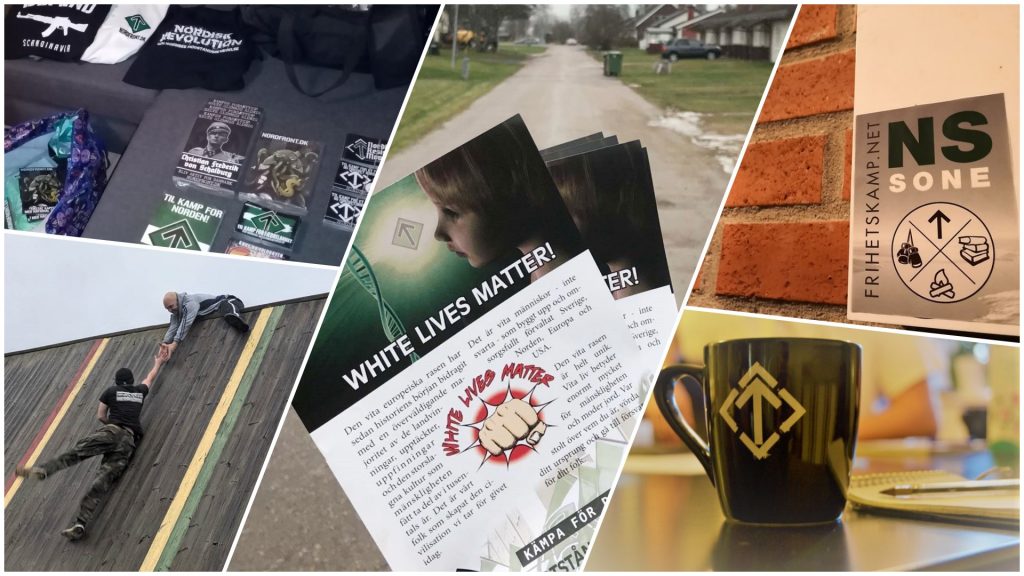 Members distributed a large number of local “Protect the children” leaflets on the first day of winter in Kimstad. 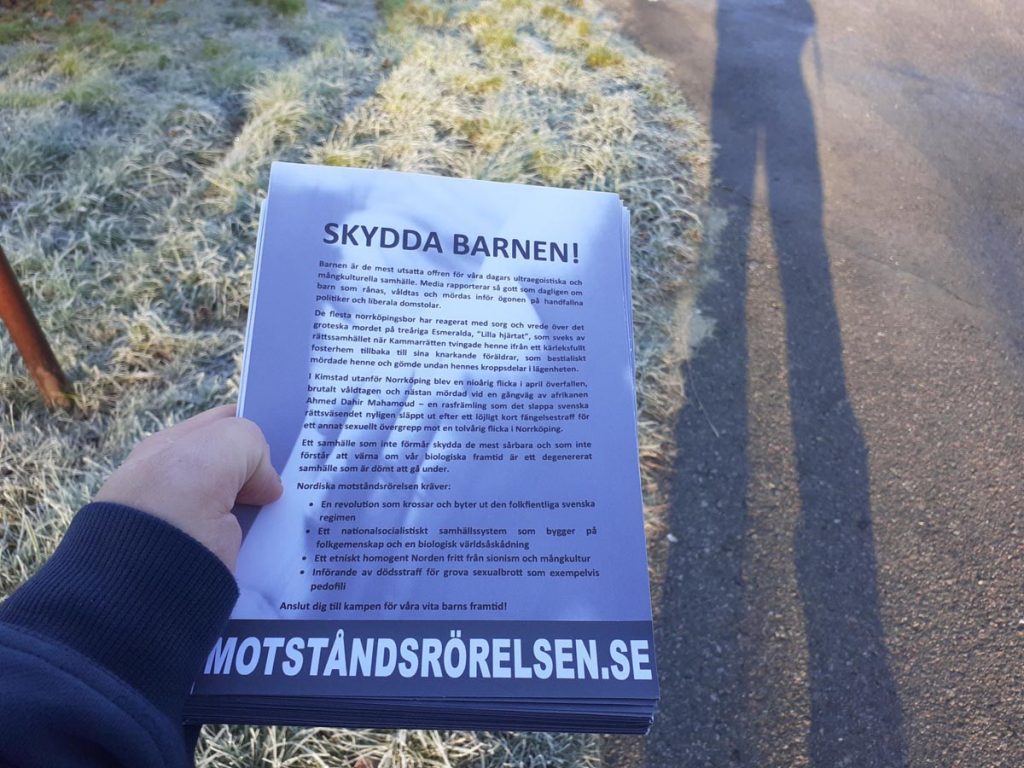 Approximately 200 leaflets were delivered in Malmudden in Luleå on Saturday, 21 November. The activity went well and was conducted quickly and effectively. 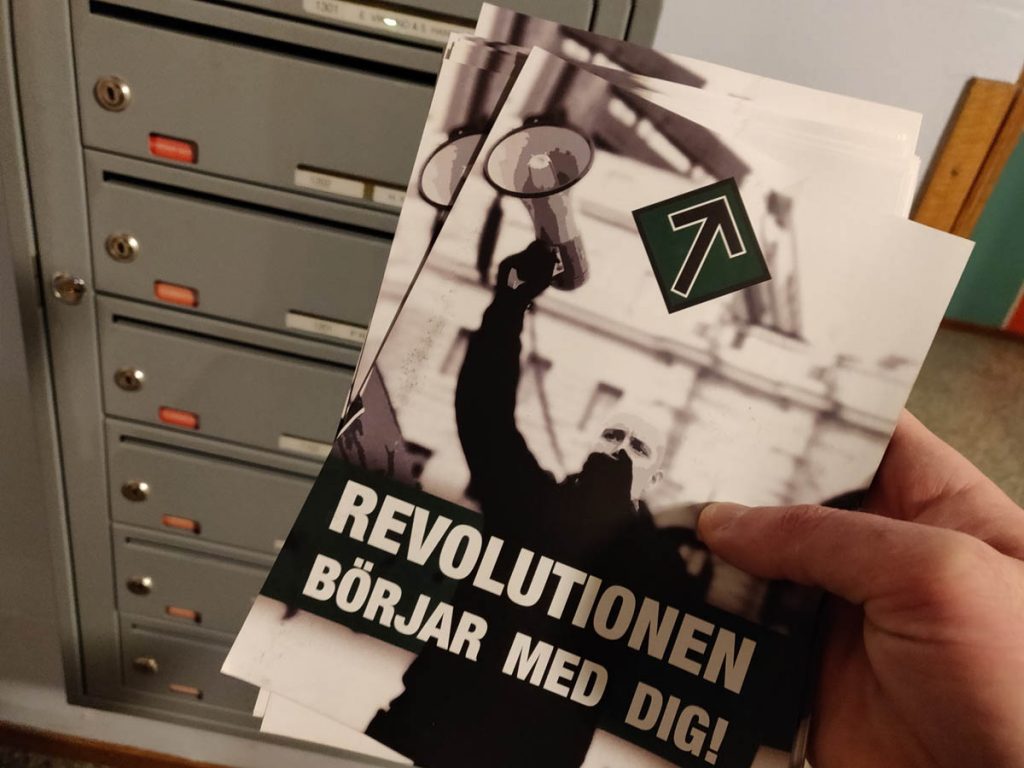 Nest 7 held a banner action on Riksväg 40 outside Jönköping on Sunday, 22 November. Many drivers beeped their horns cheerfully, gave the thumbs-up and performed other types of greetings. 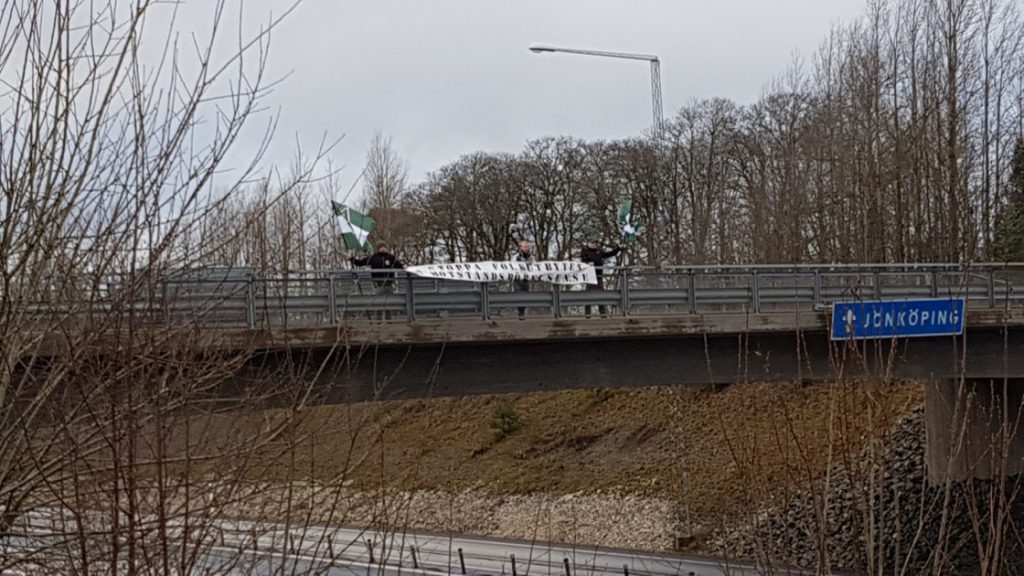 Activists from Nest 2 gathered just outside Skara to tackle the military obstacle course at Skövde Garrison.

It was rainy and muddy on the day, which made the already-challenging course even more demanding. The activists also had to complete the course in groups, which not only required a good physique but also excellent co-operation skills to overcome certain obstacles.

When the men reached the finish line, they concluded with some barbell exercises at the outdoor gym, which was located directly adjacent to the obstacle course. After everyone had set a new personal best, the activity ended and the group gathered at a comrade’s house to grill burgers together and brag about the day’s achievements.

On Sunday 22 November, Nest 5’s Activist Group met to train in martial arts in Avesta, followed by a planning meeting ahead of coming activities.

The training began with a couple of laps around the sports field’s obstacle course. The martial arts session consisted of combination training, shadow boxing and technique sparring. Towards the end of the session, the group also had time to practise defending against knife attacks.

The men then met at a comrade’s house to eat and plan future activities together.

Comrades from Nest 1 decorated a large number of previously dull electricity cabinets in Södertälje during Week 48. 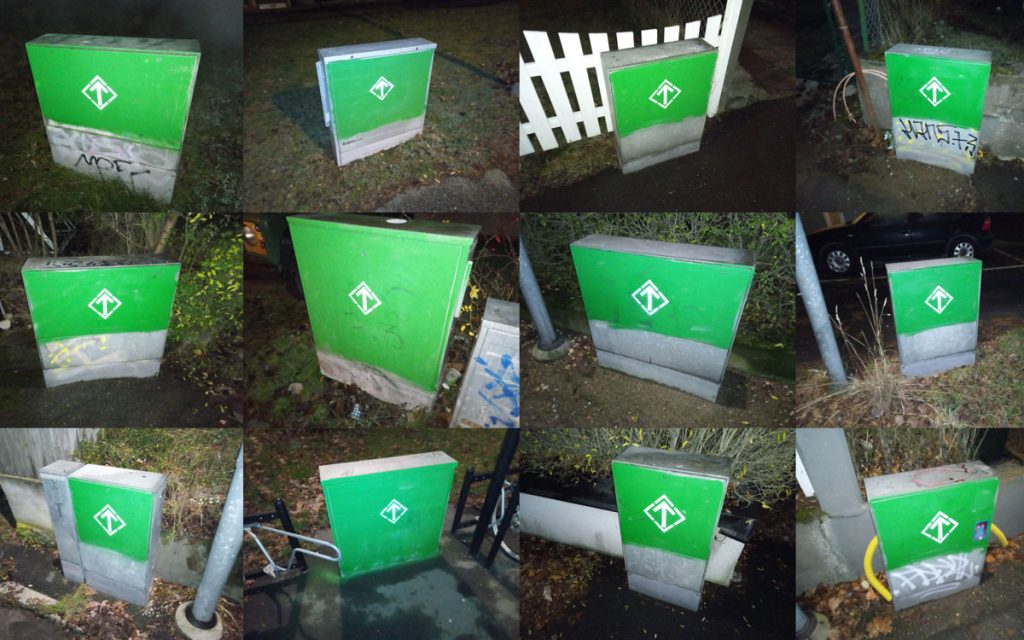 Before the week’s group training session, Nest 5’s Member Group 2 met to deliver leaflets. Around 500 leaflets were distributed before training got underway. 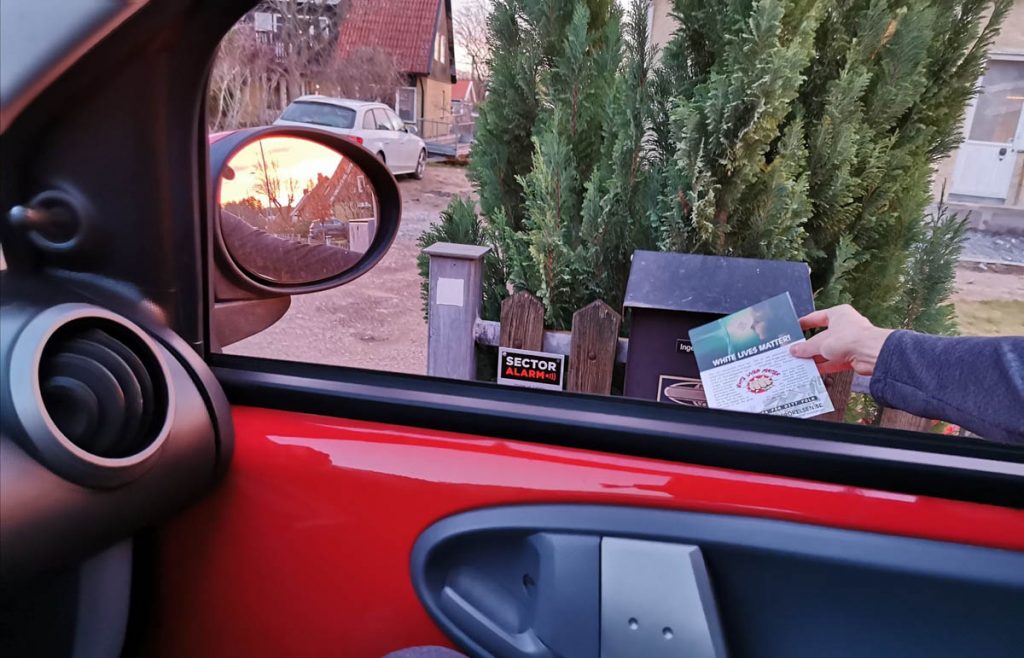 The Resistance Movement were in Vansbro Municipality again to conduct activism on 24 November. New leaflets with the message “White Lives Matter” were delivered, and stickers were placed in suitable locations.

Banners and posters in Borås

Members and a sympathiser met in central Borås on 24 November to put up two large banners, as well as posters in Tullen, Hestra, Knalleland, Sjöbo and Norrmalm.

Basic activism continued in Luleå on Monday with a major leaflet delivery in Sunderbyn, just outside the city. Close to 400 “The revolution begins with you” leaflets were delivered in a sunny Luleå. 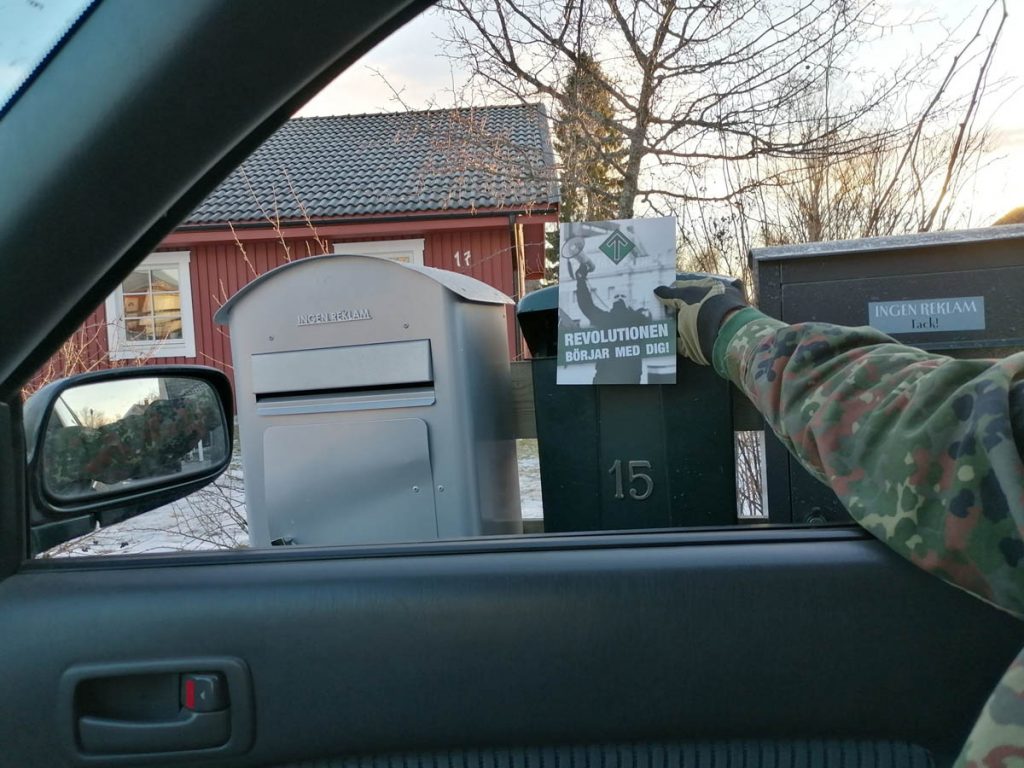 Nest 1 members put up a large banner reading “Nordic Resistance Movement – For the sake of the nuclear family” next to a school in Sundbyberg. 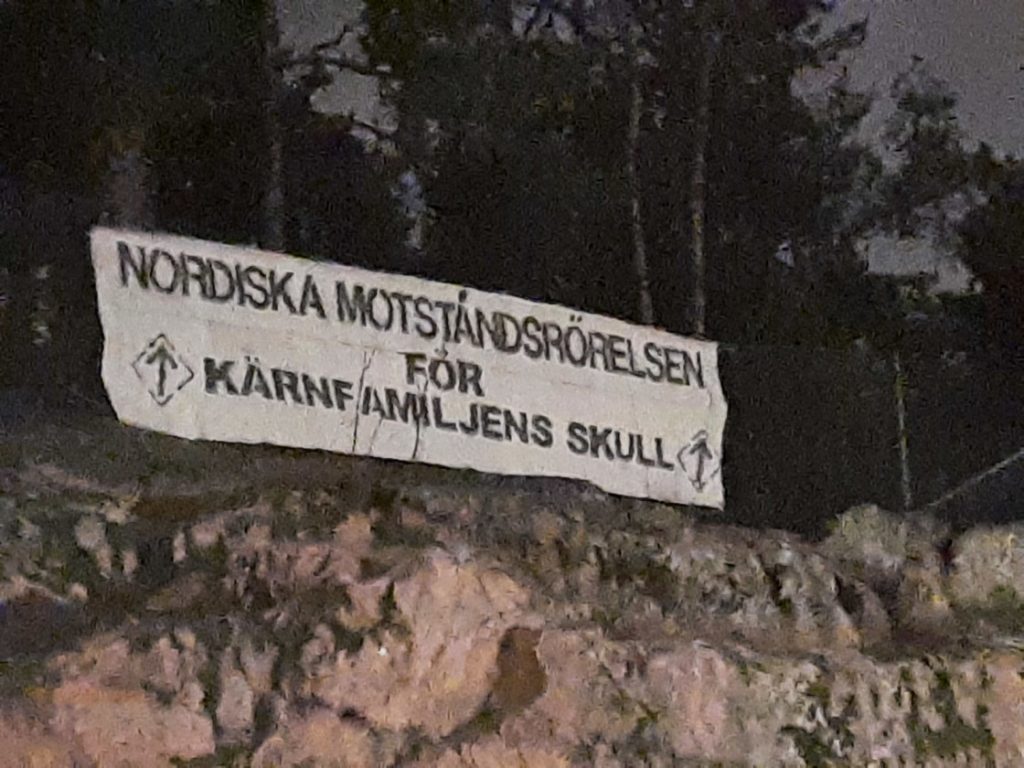 Stickers were put up in the area around Tjensvollkrysset in Stavanger.

Nest 2 held their monthly meeting with communal dining and ideological and comradely conversation. There was also the opportunity for members and activists to supply themselves with stickers and T-shirts.