GERMANY CALLING. Sports and physical exercise have always been a part of nationalist movements, but during recent years the efforts of German nationalists in this field have been professionalized and broadened. In our new instalment of “Germany Calling”, we’ll provide an overview of some current projects. 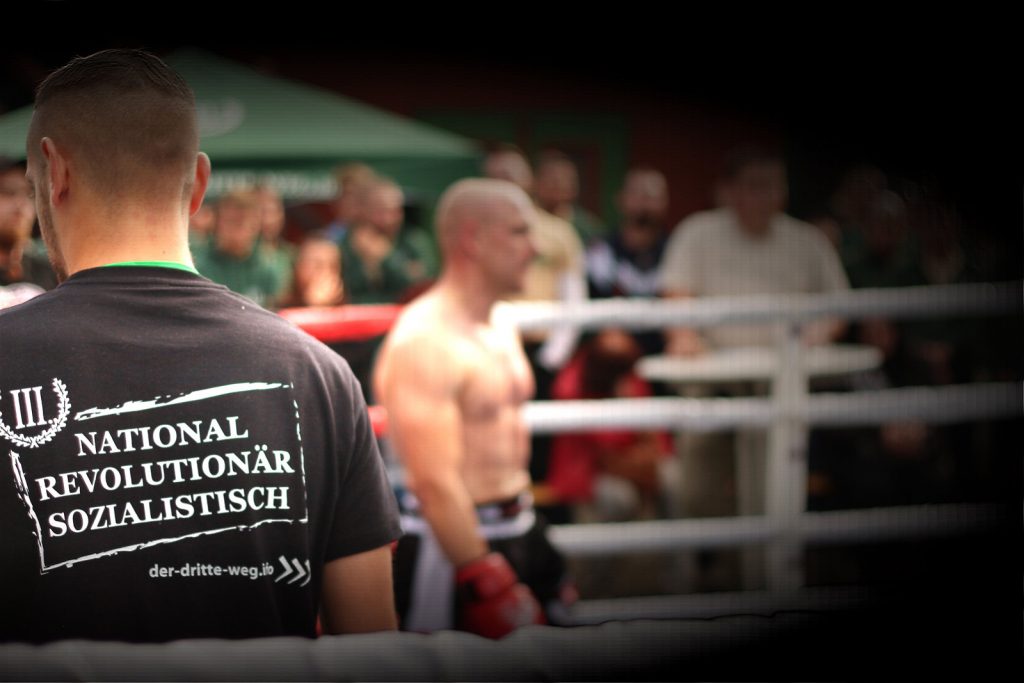 We want to start with the “Body & Mind” (Körper & Geist) working group from the party Der III. Weg (The Third Path). Founded two years ago to bring together the movement’s sports enthusiasts, it has expanded considerably since its inception. Besides organizing its own fighting tournaments and partaking in those arranged by other nationalists all around Europe, a wide array of other activities are offered, such as hikes, endurance marches, mountain climbing, bicycle tours, soccer tournaments and self-defence courses, to name a few. Regular physical exercise for members and friends is also offered where the infrastructure and the movement’s strength allow it. In venues like the national-revolutionary centre “P 130” in Plauen, open and free self-defence and Thai boxing courses are also provided to German kids, youths and adults. 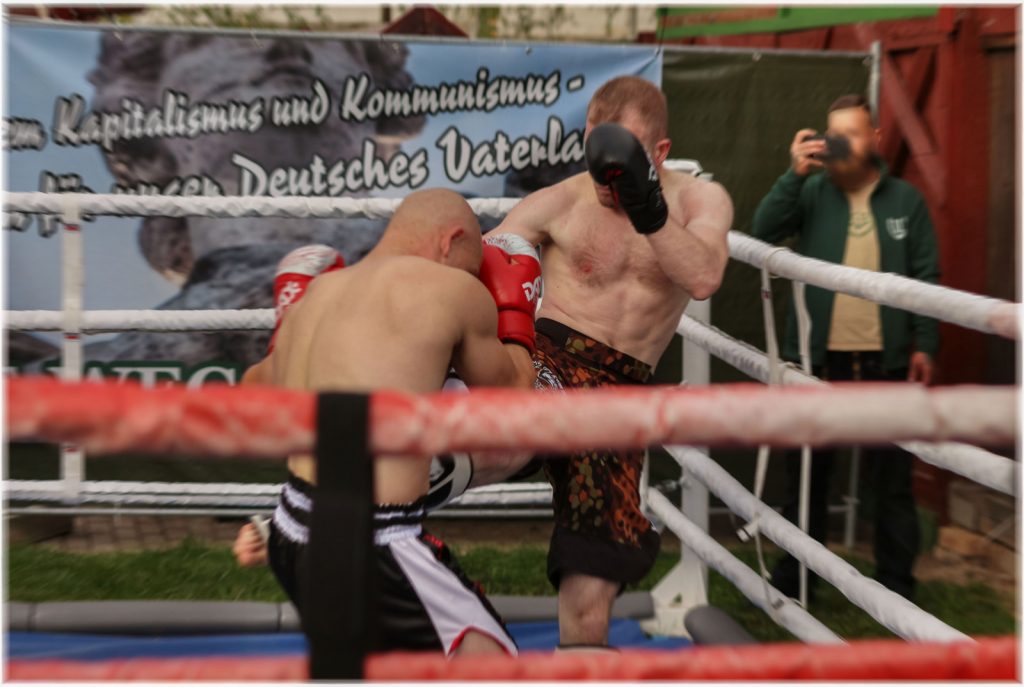 In addition to practical aspects, intellectual matters are also addressed. Articles and radio podcasts on healthy eating, advice on how to stay fit during the corona-related gym closure, and cultural influences on sport are produced. It’s important for the members of Body & Mind not just to be nationalists that happen to play sports, but to be athletes as part of a movement. As such, the working group’s foundation statement reads:

We are intentionally not a simple sports community or circle of friends, but part of a movement to bring about the völkisch rebirth of our nation. When we test each other in the boxing ring, struggle through demanding hikes or meet on an endurance run, we are not merely engaging in sports; rather, we’re performing something on a small scale that we one day wish to see practised on a large scale across our population. We are not yet able to replace the culture of weakness and pacifism in wider society, but right now we can already strengthen ourselves and thereby ultimately contribute to strengthening our entire people. We know that the degeneracy of today is not simply caused by laziness but is willingly supported and politically desired. Mere physical exercise without considering these circumstances was therefore not enough. Simultaneously, just working politicly without working on ourselves and leading by example was also not enough. 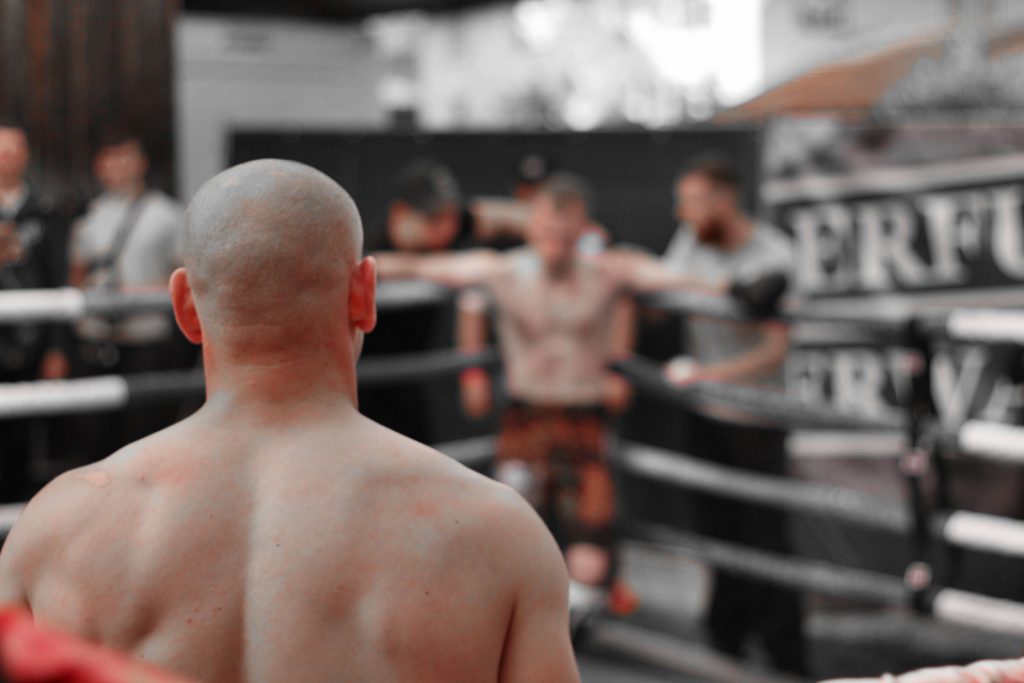 Regular reports about the activities of Body & Mind can be found on der-dritte-weg.info and Telegram.

Fight of the Nibelung 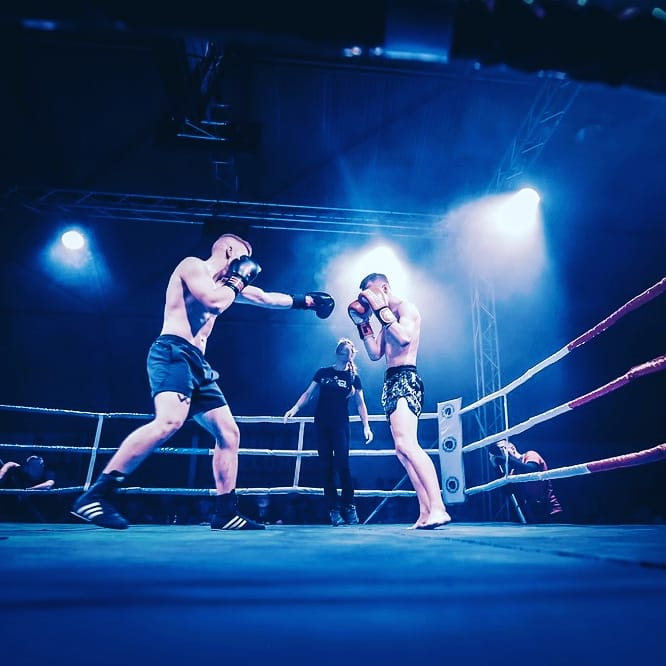 Whereas participating in most “Fight Nights” in Germany often hinges on the fighter pledging themselves to the so-called “free and democratic order”, the Fight of the Nibelung does not view sport as a part of the rotten political system, but instead wishes to establish it as an integral element of its alternative and to spread that alternative.

This was the announcement with which the “Fight of the Nibelung” (Kampf der Nibelungen), the biggest and most professional nationalist fighting tournament in Europe, began in 2013. Within only a few years, it developed into a leading professional event, radiating throughout all parts of the “right-wing” scene, drawing hundreds of viewers and exhibiting first-class fighters. Last year the state reacted to this challenge by banning the event on dubious grounds. They claimed that the boxing, K1 and MMA fights would demonstrate and teach techniques for attacking the police. Everyone who has participated in sport at least once in their lives knows that no one automatically learns techniques just by watching a fight. How a boxing punch is supposed to take down armed and armoured police forces of the system, who are equipped with all the modern tools of repression, also remains a mystery.

This year the organizers behind Fight of the Nibelung planned to arrange the fights in secret and to broadcast the recordings as a stream. But a swift ban and more than one hundred police officers stopped the fights from happening. Sadly, it seems that the police force have nothing better to do than interfere with a nationalist sporting event, despite rampant reports of daily criminal activity by foreigners, and Arabic clans and Islamists doing as they wish. The good news is that in recent years the German nationalist sporting community have reacted to the repressions. At an alternative location, some fights could be carried out and recorded, although not with the intended quality. Since 2019, there has been an active court case against the arbitrary ban and its suspicious reasoning, but the “independent” German courts take an awful lot of time to make a decision… 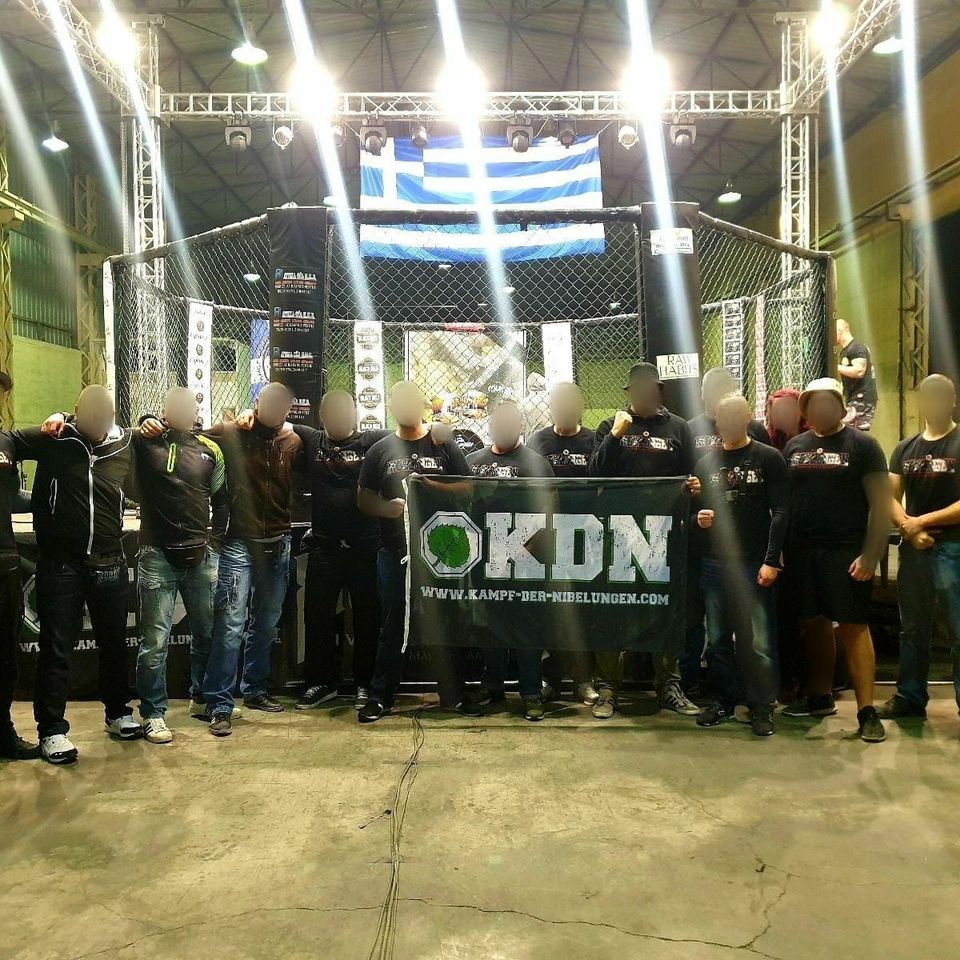 The group behind Fight of the Nibelung have announced they will not stage any new events until the court reaches a decision. Everyone who in interested in the ongoing developments can follow them here:

Tiwaz – Fight of the Free Men 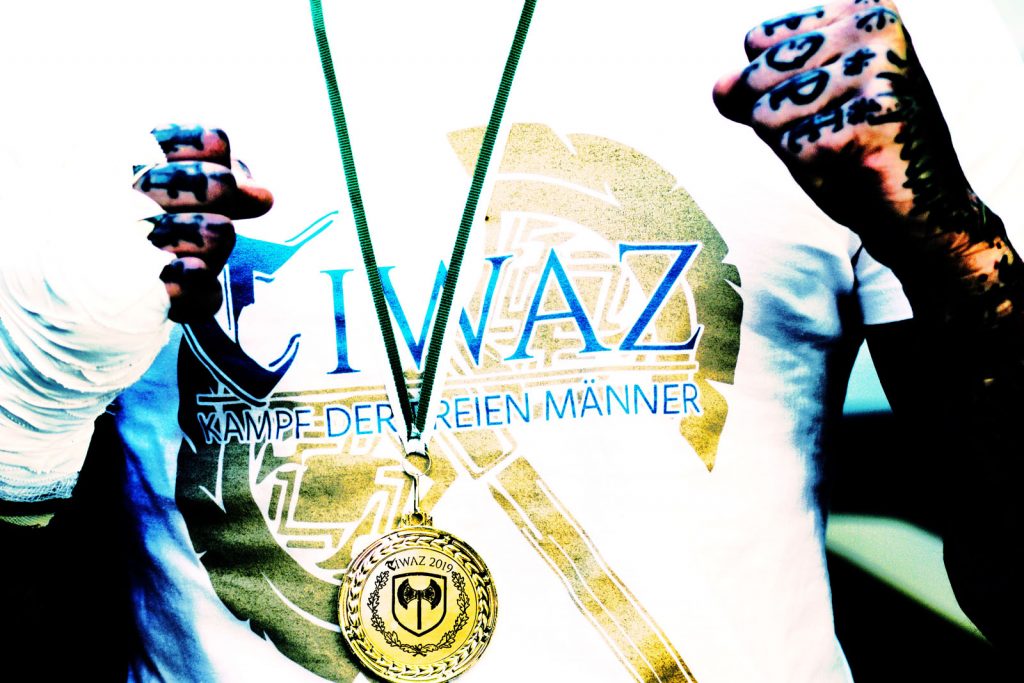 For two years in succession, unaffiliated nationalists have held the fighting tournament “Tiwaz – Fight of the Free Men”. Hundreds of guests could not only follow the fights in the ring, but also listen to political speeches and visit information and sales booths. Like the Fight of the Nibelung, there weren’t just Germans standing in the ring but also nationalists from around Europe. The organizers describe the event as follows:

Tiwaz – Fight of the Free Men is a fighting tournament in central Germany that is organised by German nationalists from different backgrounds. What other name could be more fitting, worthy and better for such an event than TIWAZ, the rune of men, from which strength and progress are drawn? The rune is linked to Tyr, the Nordic god of fighting and justice.

“For what the stirring lyre erst hath gleed
The free act of the sword hath won indeed.”

Following the motto of Theodor Körner, we don’t just want to talk about struggle and inevitable hardship but also to stand our ground as men. Fight like it was the tradition of our forefathers!

To defy the spirit of these times that paint weak mediocrity as desirable, we strive to rise above the masses, to show our skill and shine with our fighting spirit. 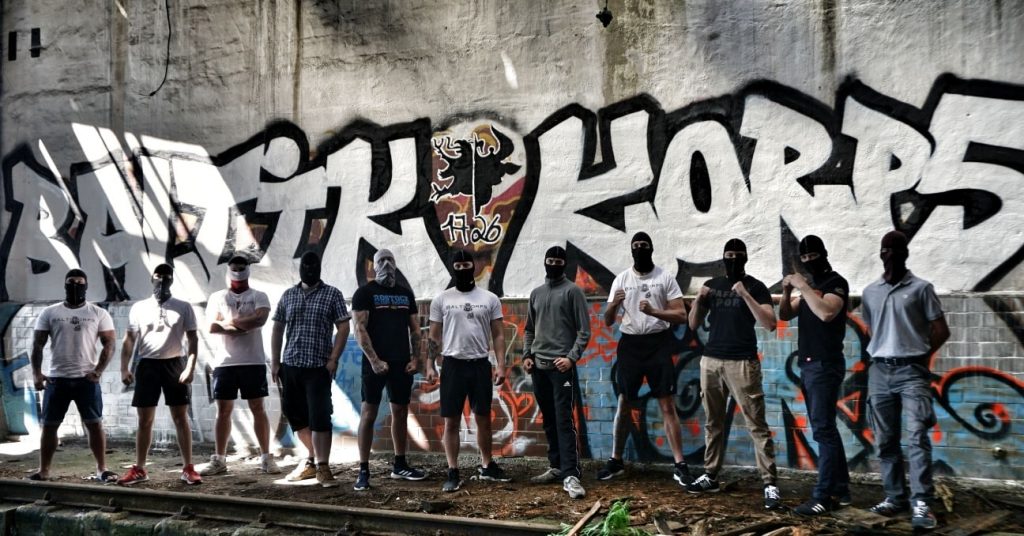 We’d like to finish our introduction to the nationalist sports scene with the boys and girls from Baltikkorps. As a nationalist sports community from northern Germany, they not only regularly send fighters into the ring, but also organize training and self-defence courses, go on hikes, cover subjects about healthy living, and criticize the modern hedonistic way of life. Baltikkorps is closely connected with the information account “Aktionsblog”, which regularly informs people about new developments concerning the community. In addition to these reports, the blog also publishes articles about ideological subjects and political activities, and thus unites sports with a worldview.

There are more groups in addition to those featured here, such as the straight-edge group Wardon, nationalist sporting podcasts and regional exercise and fighting groups. In recent years, all of these have contributed towards a positive change in the nationalist movement.