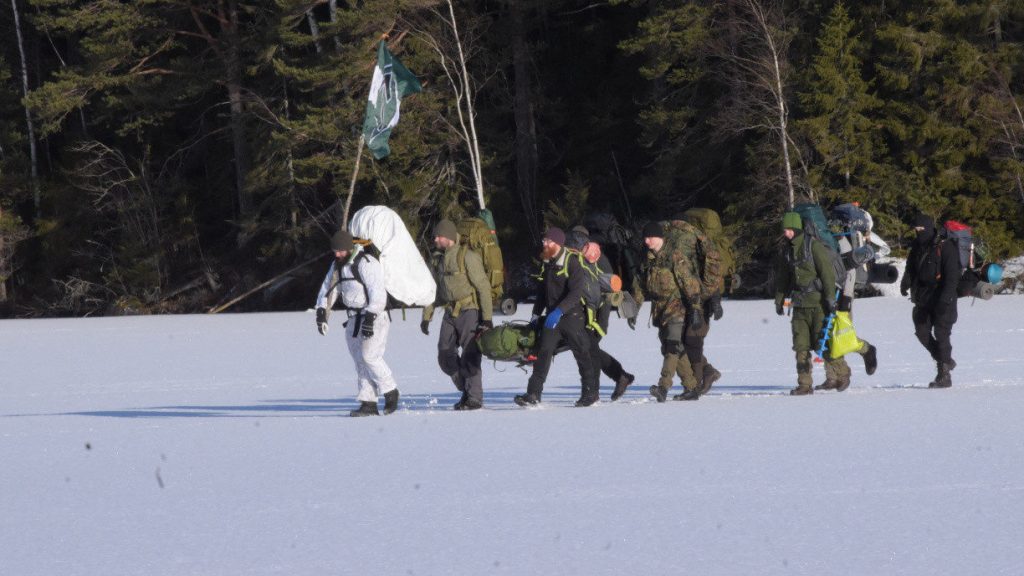 On Saturday, 5 February, members of Nest 5, together with guests from Nest 1, assembled at the most northerly bay of Lake Rämen ahead of a challenging wilderness excursion.

The morning began with the participants preparing their equipment for the long day ahead. When this was complete, Fredrik Engman gathered everyone for a rundown of the schedule for the weekend. The newly appointed wilderness activity organiser described how the weekend would consist of competitions and challenges, in which the Resistance men could earn points and compete for a glorious first place.

For the first competition on the schedule, the participants did as many push-ups as they could without resting. Next, everyone’s packs were weighed, with the heaviest pack earning the carrier the most points. When the first two competitions were over, everyone put on their packs and waited for orders to march off.

The march led the participants through varied terrain. Initially, the group hiked along gravel roads and through the forest surrounding the lake. Next, the hikers crossed the icy Lake Rämen, where they enjoyed a fantastic view and saw two moose running through the frozen reeds.

The final and most strenuous section of the hike occurred when the Resistance men headed into the forest and walked up part of Limberget mountain. This was necessary in order to reach the small plateau where the camp would be made for the weekend.

After the challenging ascent was complete, there was still no time to rest. In order for everyone to be able to enjoy hot food, water and a cosy fire, a lot of wood was needed. As such, all the participants immediately set about producing firewood. Some suitable deadwood was found, cut down and sawn up. After sawing the wood for a while, enough was prepared in order to shift the focus onto creating shelters and sleeping places.

When the camp and campfire preparations were complete, it was time for more competitions. However, before they began, the person in charge gave a brief course on how to construct a camping seat. When everyone had tried building their own seat, the formal competitions got underway. These consisted of making a fire that would burn for as long as possible, as well as boiling a litre of water from snow, without the use of a gas or spirit stove.

By this time, the sky had begun to darken. After the hard work and multiple competitions, it was decided that food and socialising should now be on the agenda. Once everyone had eaten their fill, the evening was spent in front of the fire, where the comrades could converse undisturbed and prepare a little more wood for the long night ahead. When the fire slowly started to burn out and everyone grew tired, the group went to bed and awaited the morning.

The first task to be completed at reveille was to restart the extinguished fire. Once the flames had provided heat for the food, water and the hikers, the dismantling of the campsite began. After the site had been cleaned up and tidied, everyone pulled on their packs and walked down towards the lake.

The steep slope that stood between the campsite and the lake had now been passed. After once again witnessing the wonderful view from the ice, the Resistance men gathered in formation. During the last stretch back to the cars, they walked in two lines with the flag of Tyr out in front.

When the party arrived at the other shoreline, another group of comrades were already there, awaiting their return. They had started grilling sausages, which were offered to the returning participants. The comrades had also begun ice racing with cars when the wilderness enthusiasts reached the lake. This was not an unusual sight, as the Nest has arranged similar activities before. Towards the end of the day, some of the comrades cut holes in the ice so they could bathe in the lake. When the ice bathing was over and the sausages had all been consumed, the attendees thanked one another for a pleasant weekend and said farewell.