RESISTANCE MOVEMENT. On Saturday 26 October, members from Nest 7 gathered for a full day of struggle. The day included practically all types of activism the Nordic Resistance Movement conduct 365 days a year.

The Resistance men began the day in the early hours of the morning. The activism commenced with logo-spraying in well-chosen locations in the villages of Smålandsstenar and Reftele, on the border of Nest 2. The expedition then continued eastwards to the Värnamo municipality. Here comrades put up a banner in Rydaholm and then decorated the village of Horda with National Socialist symbols. Although the weather was poor, with rain and strong winds, the mood was high. After the activism in Värnamo, the rain-soaked activists got back into the car and continued their journey.

The next municipality on the route was Växjö. Along National Highway 25 another banner was put up, and various signs were adorned with the Resistance Movement’s symbols. By this time the rain had stopped, but the sun was still not to be seen on this cloudy October day. The journey continued, and the activists soon arrived in Lessebo municipality. Here the same formula continued. Outside the village of Hovmantorp, a banner was put up, while in the middle of Lessebo village, two Tyr runes now brighten the autumn darkness.

The day’s careful planning meant the activists met other comrades at the appointed time at the Nest Chief’s house out in the forests and meadows of rural Småland. As usual it was a happy reunion filled with laughter, despite the unpleasant autumn weather. The next activity on the busy Saturday was a public leaflet distribution in Kalmar, so the activists took the opportunity to change into some clothes more appropriate for civilisation (if such a multicultural city can still be called civilised). A short car trip later, the cheerful group were in central Kalmar, where the flag bearers took their positions on the main pedestrian crossroads. 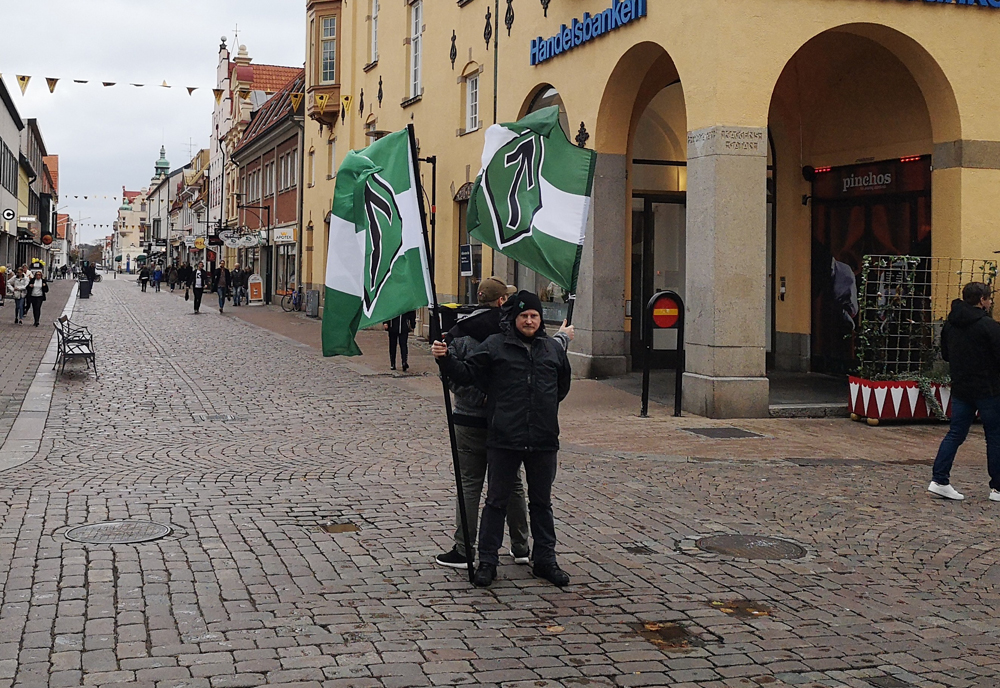 Hardly a moment had passed before the first police patrol arrived. The police tried in vain to find someone in charge of the constitutionally protected activity, but they had to give up after a while and contented themselves with watching the leafleting from a distance until another patrol arrived. After a conversation between the state’s lackeys, it seemed a decision was made to let the Resistance men continue their advocacy for freedom of speech. However, there weren’t very many people on Kalmar’s biggest street, so it was decided to move to Baronen shopping centre, situated in the harbour, outside Kalmar’s old city walls. 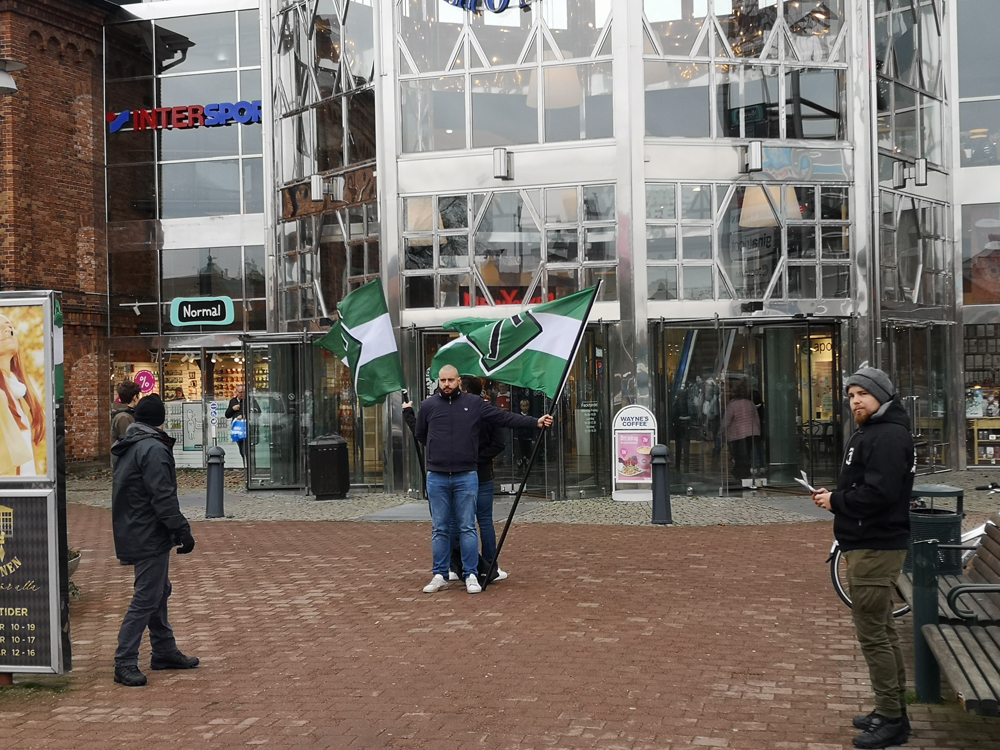 Within a few minutes, the state’s henchmen were on site again, and for once not to intervene in some kind of gang fight or drug deal which often takes place around Baronen and the nearby train station. The distribution continued without interruptions until an officer came to the scene and decided to write up a report, but first he had to find someone responsible for the gathering. Such political manifestations are protected by both government declaration and constitutional laws, something which the officer admitted to a Nordfront journalist on video when he said the public meeting was allowed. Even so, a leafletler was randomly chosen and informed he was suspected of a disturbance of the peace. When the officer left, the distribution could recommence, and there were many discussions despite the overcast weather and cool winds blowing through the harbour. 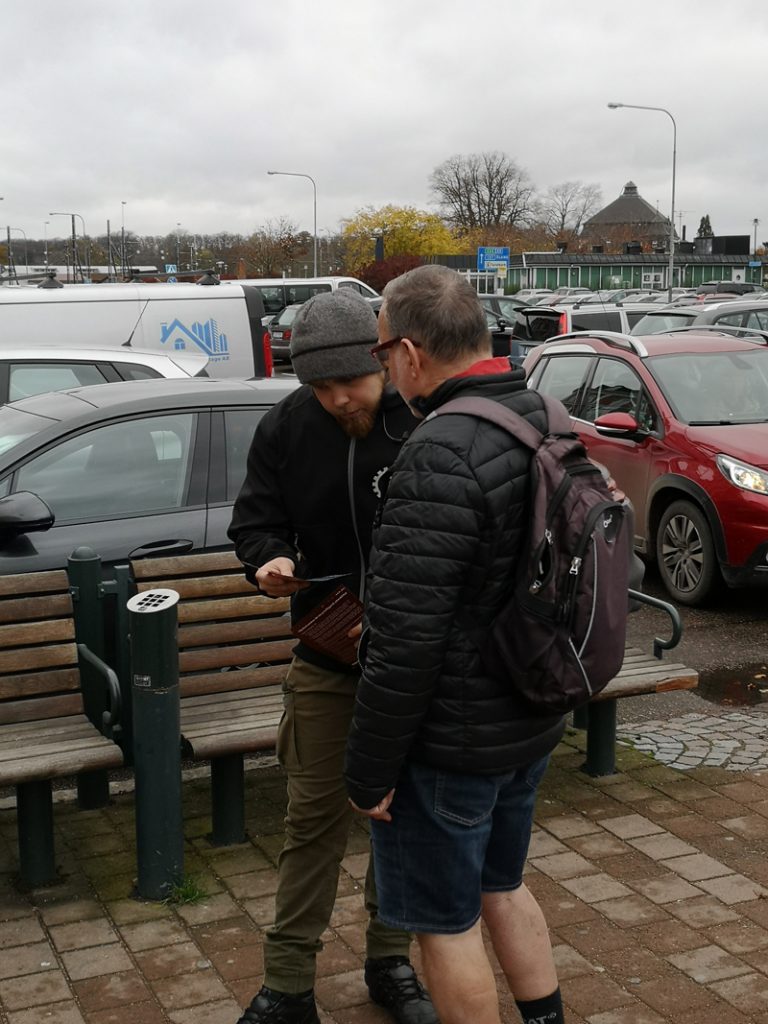 A man was seen filming the activity from inside the shopping centre, so Nest Chief Magnus Wardmo took the opportunity to approach him and film an exchange on his phone. The man turned out to be an undercover policeman who was “opinion-registering” proud Nordic men who stand up for their people. The video can be seen here:

The activity in Kalmar was a calm affair, so calm that the last policeman on the scene opened his car to the public. He let children sit in the driver’s seat and gave out balloons to passers-by – strange behaviour given how violent the Resistance Movement’s activities are supposed to be according to the media and our opponents.

After just over two hours in Kalmar, the Nordic Resistance Movement’s Nest 7 said their thank-yous and goodbyes for this time, but it won’t be long before proud National Socialists are back on the city’s streets. One thing all the participants in the activity noticed was that the Nordic Resistance Movement and our flags are well established in the minds of the public. No one seemed to wonder who we were or who was giving out the leaflets – a clear sign that the media attacks only make us more famous (and infamous) to the man on the street. This means we can spend time discussing factual matters instead of explaining who we are, making it much easier to spread our message and political views. Another issue that rarely comes up now are all the discussions about the Holohoax’s existence or non-existence. Here too it seems we have broken through an important barrier and disarmed our enemy.

After the public leafleting, it was time for the second group to carry out yet more activism, hanging a banner from a bridge in Uppvidinge. This activity came much to the distress of local resident and Sweden Democrat MP Mattias “Curry” Karlsson, who believed it was intended to frighten him. He went on to write a bizarre post on Facebook claiming “Nazis” had been running around in his village putting up banners for the Nordic Resistance Movement to “scare him into silence”. Why Karlsson believed a banner advertising one of the Nordic Resistance Movement’s websites was aimed at him is still unclear. 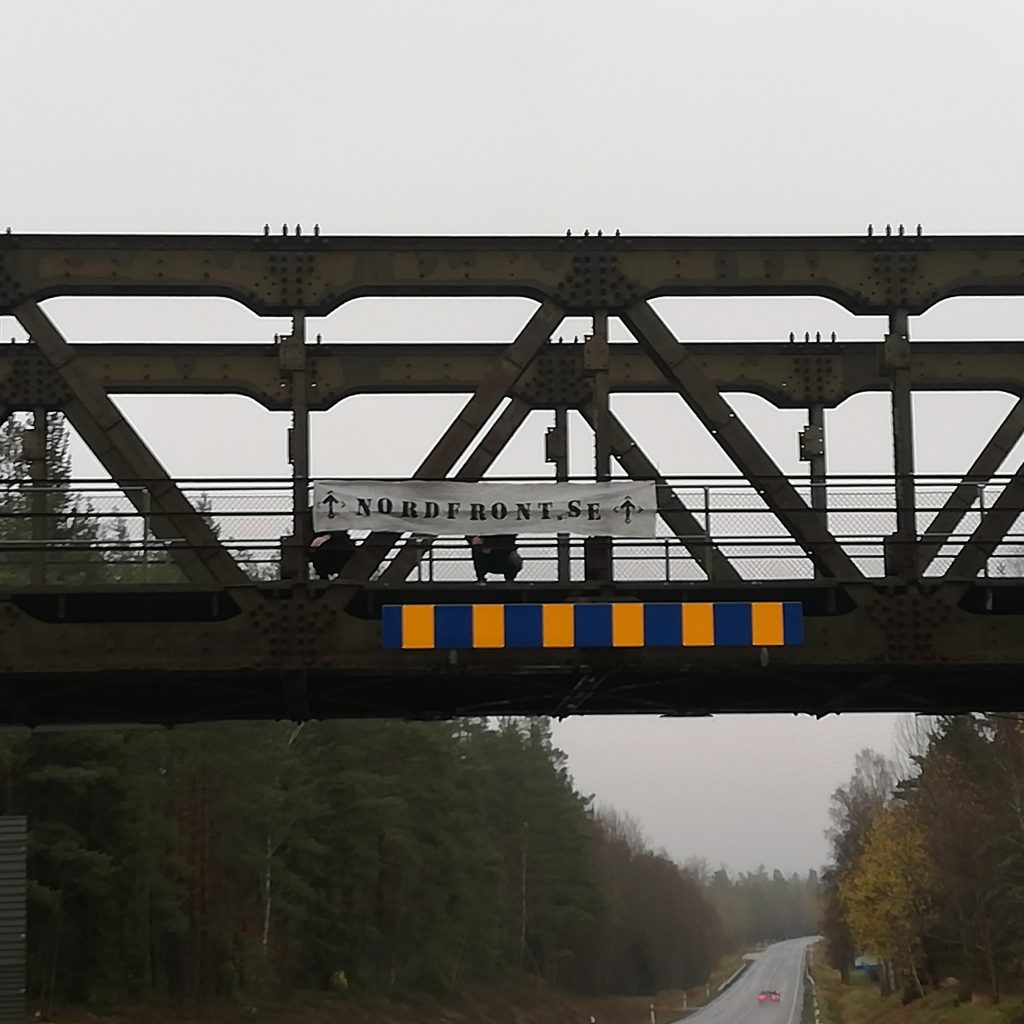 The expedition went on via the village of Hultsfred, and finally Eksjö was decorated with a banner. The 26th of October was a full day in service of the struggle for our people’s survival and will be followed by many similar days in the future.