ACTIVISM. The Nordic Resistance Movement held town square meetings and speeches across Sweden on Saturday, 3 July to encourage the people to unite and join the struggle.

The Nordic people must stand up to the corrupt system that fills our nations with racially foreign rapists and violent criminals. We must unite against threatening foreign gangs, corrupt politicians and the lying media. It is your duty to fight back and reclaim our nation!

Below is a translation of the live reporting from the day. 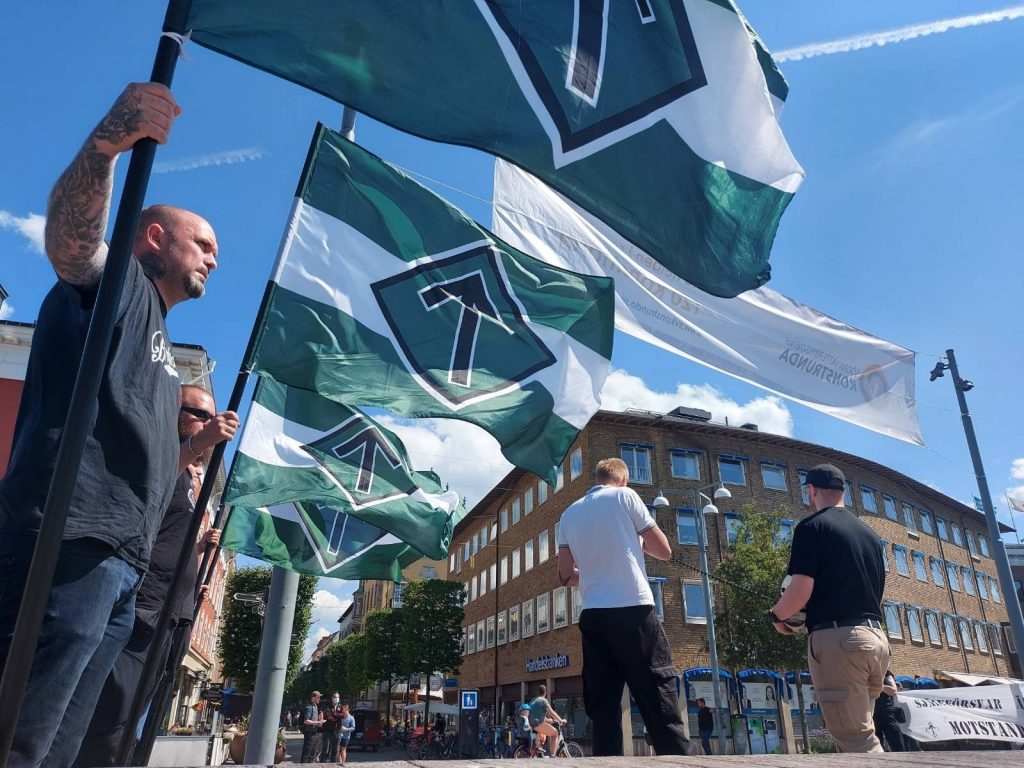 11:20. The Nordic Resistance Movement have arrived on Lilltorget square in Vetlanda and Fristad Square in Eskilstuna. 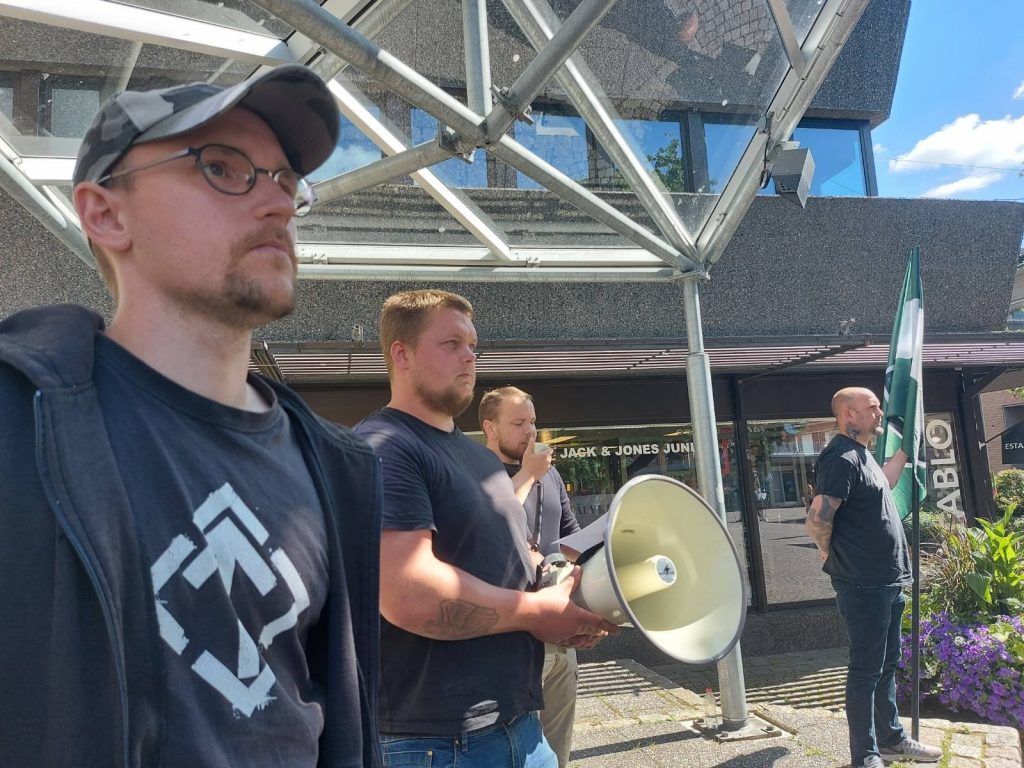 11:50. The police have come to Lilltorget in Vetlanda. Surveilling White people who organise and stand up against the corrupt system is clearly a top priority for the police. 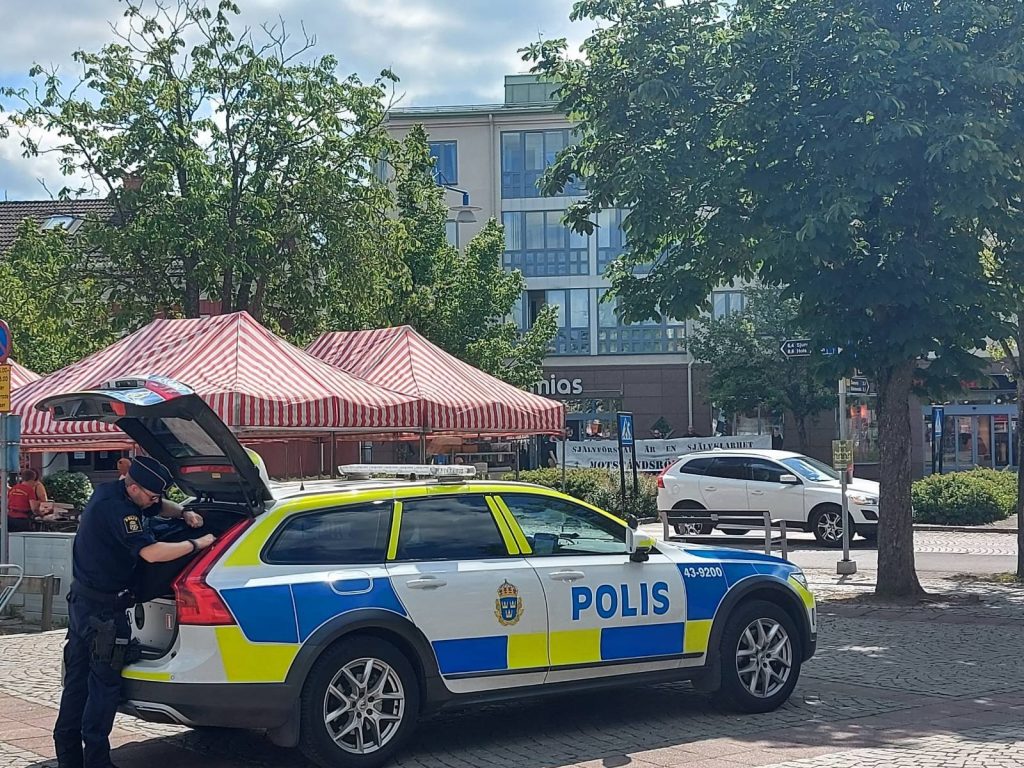 The state’s lackeys stopped by in Eskilstuna. Naturally, they stated that everything is in order. Before moving on, they took a leaflet – probably to display in the break room so more officers realise they need to prioritise their resources according to the Resistance Movement’s principles instead of their current masters’.

12:50. Nest 4 and Nest 6 take up positions with a banner in central Sundsvall. David Nilsson holds a speech for the local people.

13:15. The police in Sundsvall see organised White people who stand up for their cause as a threat. David Nilsson is now being taken into custody. The police’s reasons are unclear, as no criminal offences have been identified.

The Resistance men in Sundsvall continue to hold speeches. The police seem to have formed a fan club and are filming the speech.

13:25. The activity in Eskilstuna is over, but the activists on site promise more to come.

14:00. The police are already on site in Västerås, but have kept their distance so far. 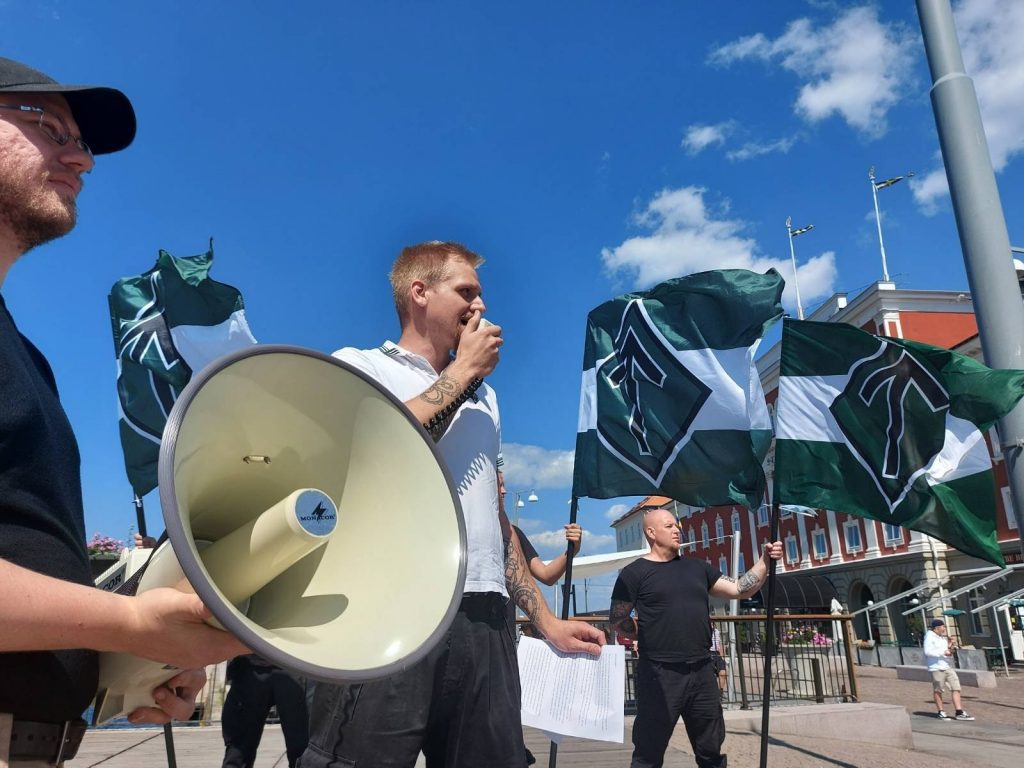 Nest 4 and Nest 6 have now spread their message to the people of Sundsvall and are going to the next location. David Nilsson has been released in conjunction with the Resistance men marching out of Sundsvall. The police’s supposed justification for taking David into custody was a PL13 – “disturbing the public order”.

14:15. The response from the people of Västerås is reported to be very good, and many leaflets are changing hands. There has also been a good reception in Jönköping, with the exception of two racial strangers, apparently on drugs, and a gender-confused person. None of these people have dared to approach the Resistance men, but have instead stood at a distance and screamed for a while, before tiring and skulking away from the area. 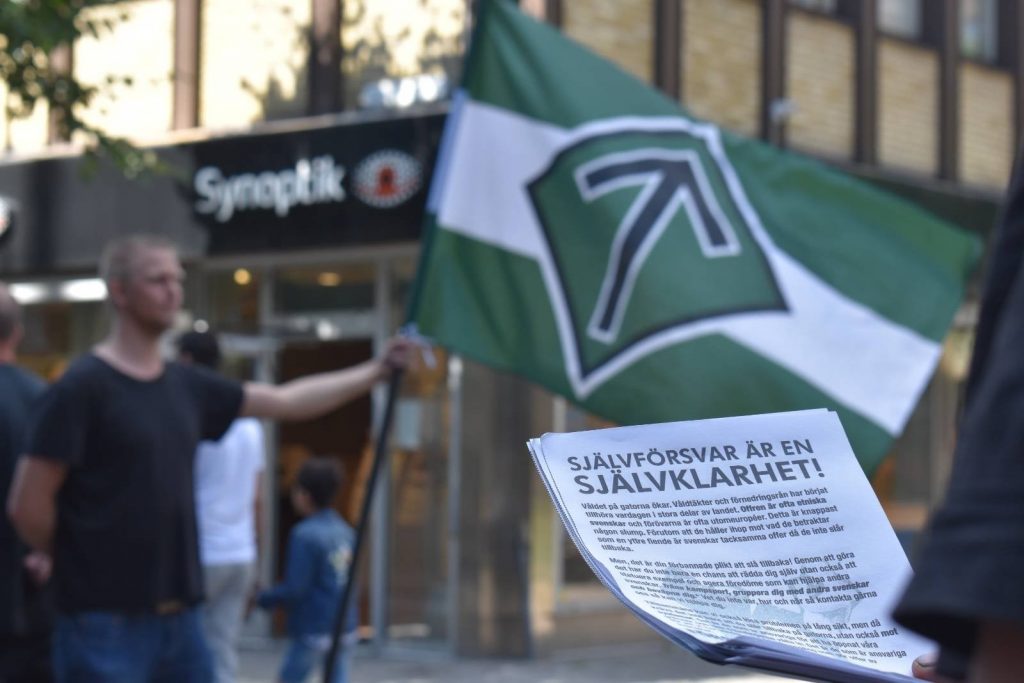 14:25. The eternal mantra about a “lack of police resources” is not noticeable in Västerås, where another patrol car arrives.

14:45. The activity in Västerås has been concluded. The Resistance men report a successful day with many productive discussions, even if the hot weather meant there were fewer Saturday shoppers than usual.

15:00. The Resistance men in Jönköping have now concluded their activity. The response among local people is described as very good. Many leaflets were distributed, and there was much agreement and sympathy for the comrades’ message. One member of the audience even took the opportunity to submit a membership application to the Nordic Resistance Movement on the spot.

15:15. The Nordic Resistance Movement have now taken up positions outside the county governor’s residence in Härnösand. David Nilsson is once again holding a speech. 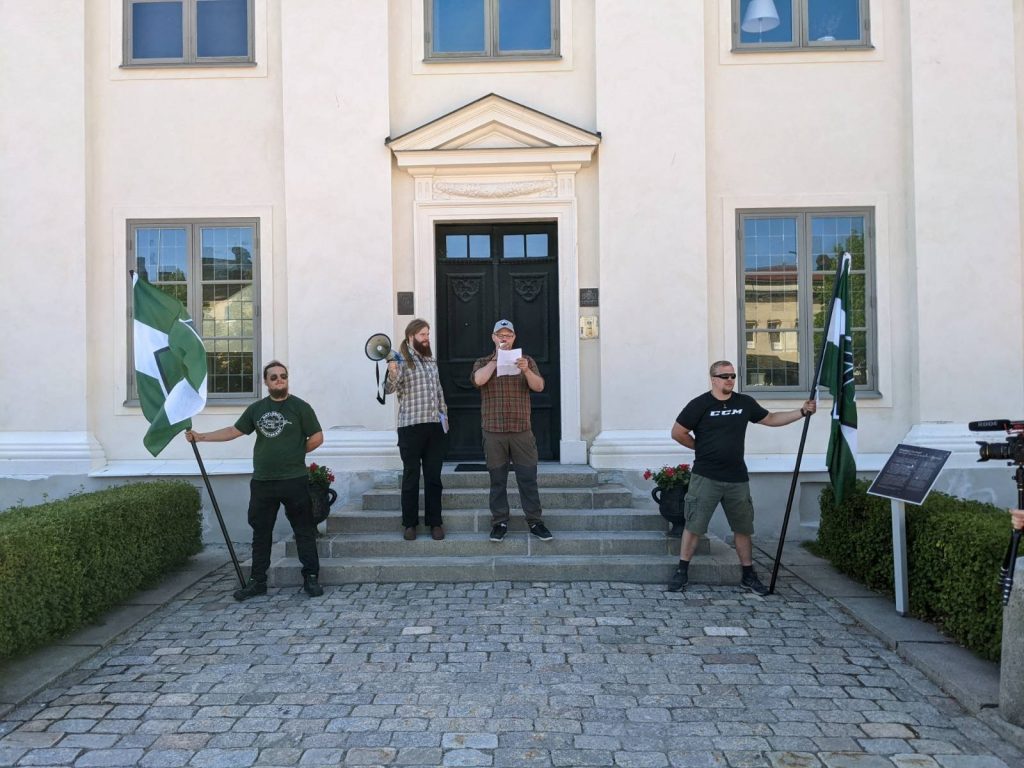 15:30. The police are now on the square, just in time for the next speaker. 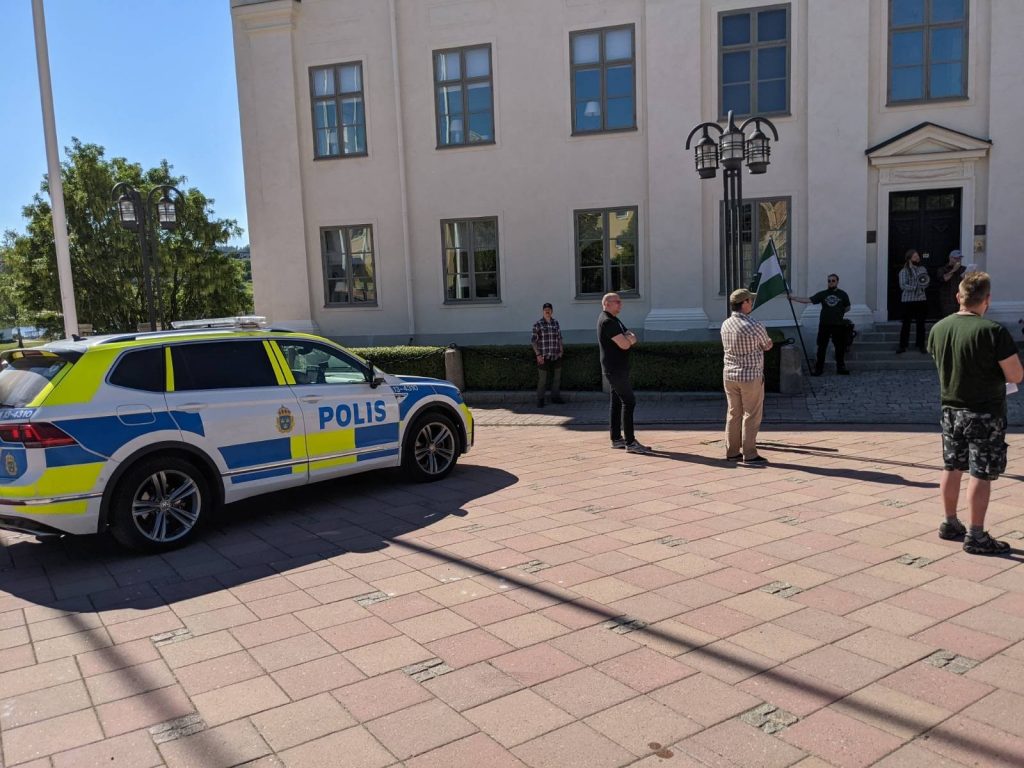 15:55. The police urge a hot-tempered racial stranger to leave the area. Whether or not this racial stranger would have the courage to behave in a similar way if the police were not present is open to speculation. 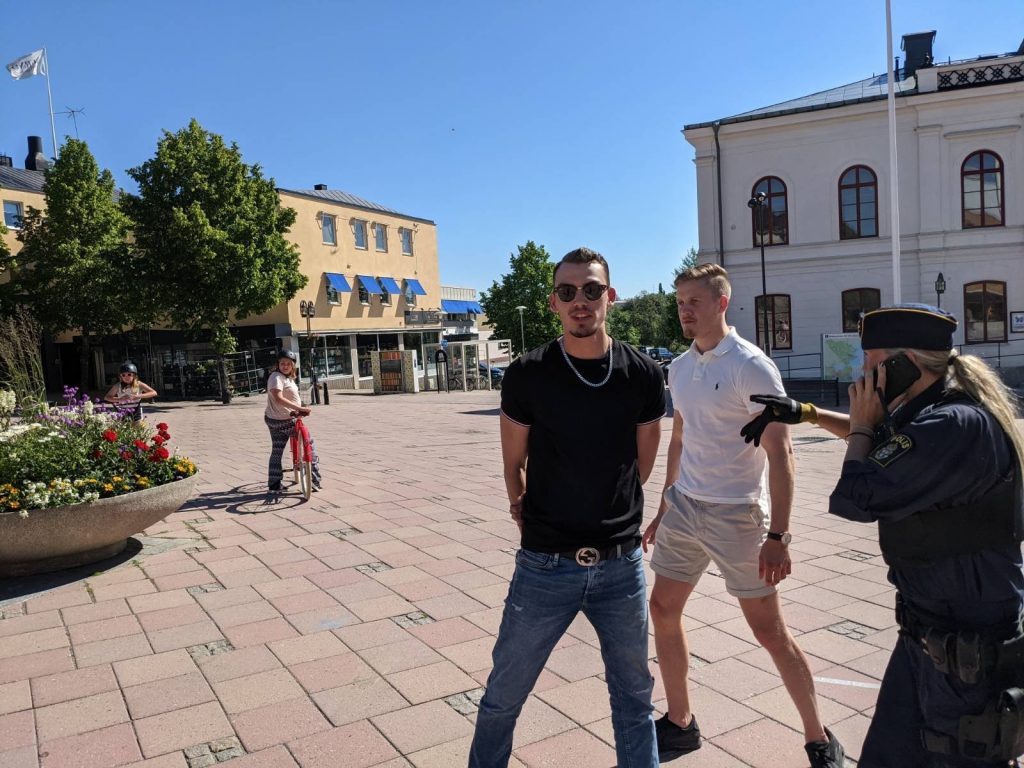 16:05. The activity in Härnösand is at an end. The Resistance men on site report that they were able to carry out the activity as planned without any major disruptions from the police.

The live reporting from the day’s town square meetings is now over. Support the Nordic Resistance Movement to see more similar actions in the future!