ACTIVISM. Activists from Denmark’s Nest 3 fired emergency flares over Aarhus in a symbolic action as Denmark drowns in mass immigration and multiculturalism. 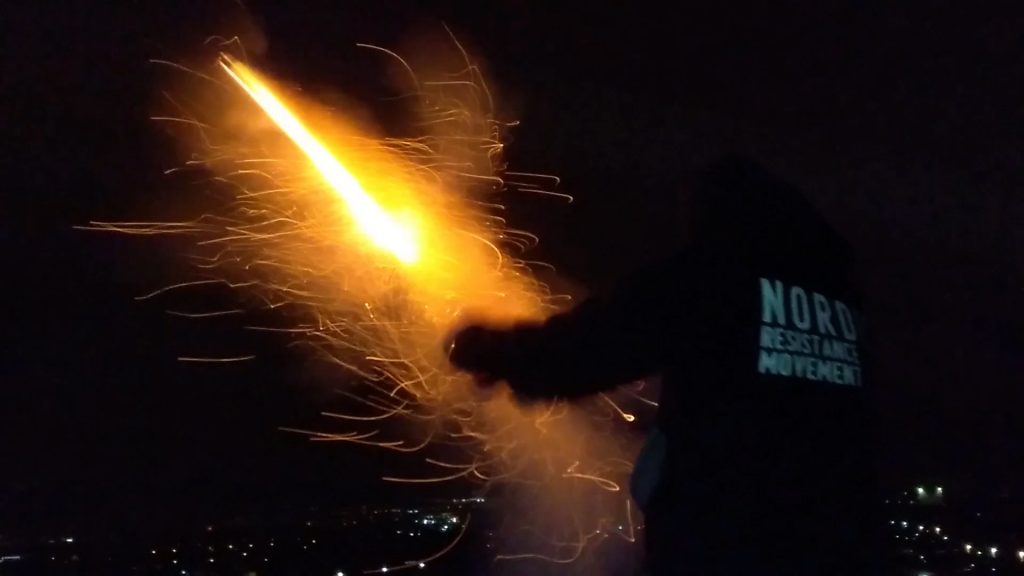 When you look at Denmark in 2021, you can clearly see the consequences of the last several decades of mass immigration. The city centres bear the clear imprint of multiculturalism – the veiled Arab wives and loud-mouthed immigrant youths can’t be ignored, even by the most short-sighted of onlookers. The Danish open sandwich shops are long gone, and if you want to have a meal on the go in the city, you usually have to put your money in the pocket of a racially foreign owner of a pizza takeaway or shawarma shop. Even multicultural supermarkets are establishing themselves on Danish soil, in a development that is slowly but surely making Denmark completely kosher and halal – even in the smaller villages.

When observing people in the public space, you also see the disfigured face of multiculturalism. The foreigners rule the cities with a heavy hand and aggressive behaviour. Danish youths fall victim to muggings and assaults by racially foreign perpetrators, white women are hunted for rape, and non-Western immigrants are greatly over-represented in the general crime statistics.

To draw attention to the fact that Denmark is drowning in mass immigration and multiculturalism, activists from the Nordic Resistance Movement fired emergency flares above Aarhus in a symbolic action last weekend.

Video from the action:

In December 2020, Statistics Denmark published a report entitled Immigrants in Denmark, which clearly shows that mass immigration is a ticking bomb.

As a lesser, but still negative, consequence of mass immigration, Statistics Denmark’s report shows that the nation’s level of knowledge decreases as the proportion of non-Western immigrants increases, as first-, second- and even third-generation immigrants from non-Western countries perform significantly worse in primary school leaving exams than Danes.

In addition, the economic aspect means that the vast majority of non-Western immigrants are supported by the public sector. The report lists the proportion of men on public welfare, broken down by country of origin, the top three of which are Lebanese immigrants with 55% on public welfare, Iraqis with 54%, and Somalis with 53%. Things are even worse when it come to racially foreign women in Denmark, with 76% of Syrian women on public support, 70% of Lebanese, and 68% of Somalis.

Denmark is drowning in mass immigration and multiculturalism, and the only thing racially foreign immigrants do better than White Danes is commit crimes.

These foreigner-dominated crime statistics include last year’s repeated incidents of humiliation violence committed against young Danish boys, the rape epidemic and drug trafficking, among other things.

Denmark is drowning in mass immigration and multiculturalism, and it’s a matter of life or death!

But mass immigration’s impact on society and the people’s general declining safety pales in comparison to the irreversible consequences of continued immigration, which will see White people become minorities in their own countries, and ultimately become extinct as a race.

Population replacement is a reality – a fact that appears obvious to the world’s Jewish TV and film industries, which have been responsible for producing numerous new versions of classic tales with increasingly darkening casts.

Multiculturalism is an anti-White mindset, and globalist Jews are never hesitant to fuel the anti-White wildfire and exploit it for their own world-Zionist gain.

Denmark is drowning in mass immigration and multiculturalism, and it will take more than bleeding-heart parliamentarianism to save us.

The Nordic Resistance Movement will immediately put an end to mass immigration and begin the repatriation of the majority of all who are not Northern Europeans or of closely related descent, and work by all necessary means to regain power from the global Zionist elite that has economically and militarily occupied a greater part of our world and promoted socially destructive ideologies such as liberalism and Cultural Marxism.

The Nordic Resistance Movement is the only force that can ultimately rehabilitate the people and ensure their continued existence, with our own culture in our own territory.