ACTIVISM. On Saturday the 10th of August, comrades from Nest 2 held two public leaflet distributions in Uddevalla at Torp shopping centre and in Trollhättan at Överby shopping centre. The locations were very busy with Saturday shoppers, which is always a good sign for a successful propaganda activity. 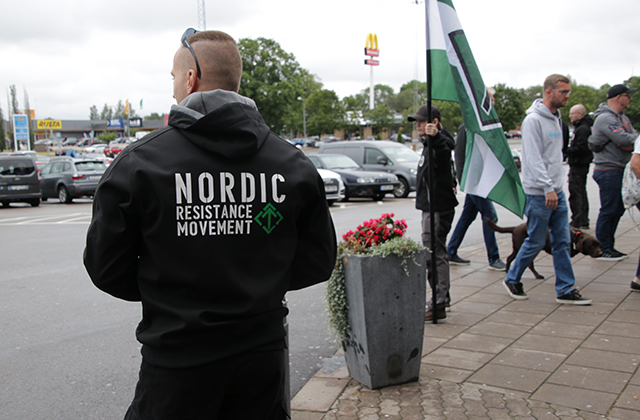 At the beginning of the activity in Uddevalla, a few odd characters showed up who tried to expressively distance themselves from the Resistance Movement and National Socialism. One hysteric woman forced her children to take a good look at “those we saw on the TV”, exposing her maenadic, hateful character and her confused, brainwashed sense of reality. Then there were some cocky, older guys who walked away shamefully and frustrated after they could no longer dispute the comrades’ arguments.

Luckily enough, it wasn’t only peculiar and confused individuals the comrades met that day, but also some strong and clear-thinking ones as well. For example, an ex-member of the Party of the Swedes as well as others who openly expressed their interest in joining the Resistance Movement.

There were also people who moved between these two opposite poles – those who wished to ask questions and discuss with the comrades, both with friendly and hostile perspectives and points of view. The most popular questions were by far mass immigration and repatriation of racial aliens.

As the activity was going on in Uddevalla, a similar activity was taking place in Trollhättan, where the Resistance Movement’s message was met in a similar manner by the people.

A few individuals were eager to point out how amazing our modern society is and how nasty National Socialism is, without much success. As the comrades explained and clarified the falsity of their detractors’ reasoning, these admirers of the unnatural, multicultural societies started questioning their own arguments and perception of reality. Hopefully they will reconsider their standpoints.

One woman repeated the old, classical Marxist-liberal pseudo argument that races have no importance and that by race mixing one gets the best from both sides, ridiculously contradicting her own words by memorising an empty, false and meaningless mantra. According to her – and unfortunately many others – race-mixed people and their race-mixed “culture” would become an unprecedented, enlightened form of the Frankenstein monster. History, however, has never presented such an example of “higher civilization”, and anyone who is not completely brainwashed knows very well that it never will. The good news is that the woman in question promised she would try to read something on Nordfront.se!

The activity was monitored by two police cars that arrived at the scene, even though no fights or any disorder took place. They kept their distance and drove away after while in order to (hopefully) fight some real criminality.

After about two hours, when the activity was over, both groups met together in order to evaluate the day and eat together.