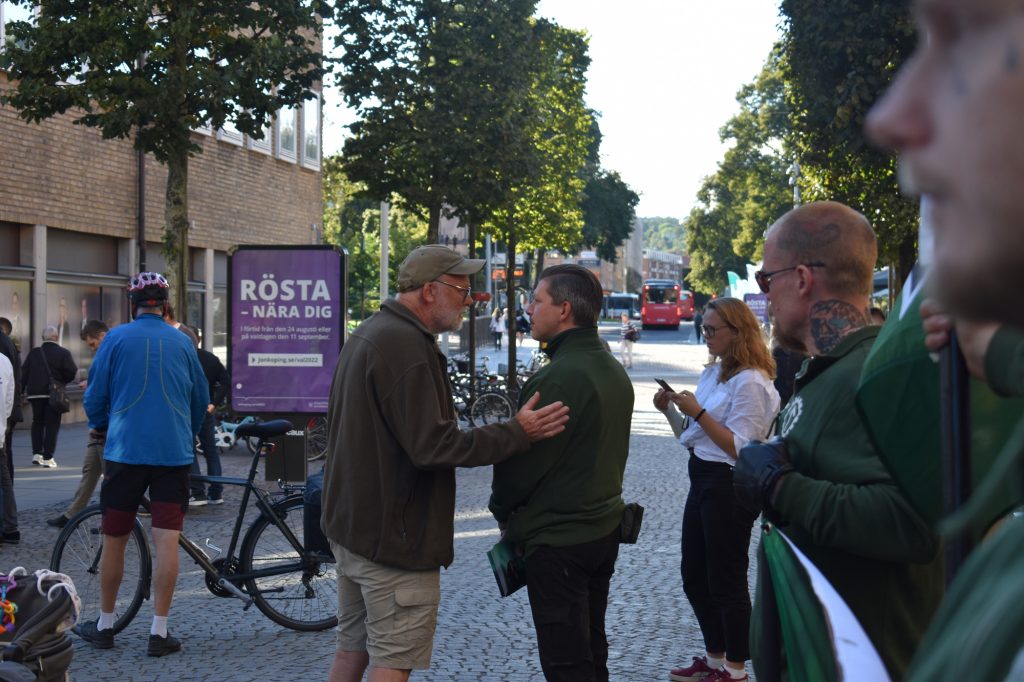 Resistance activists were in Jönköping on Thursday to visit Alternative for Sweden’s town square meeting, where they stood holding a banner to encourage the audience to join the revolutionary struggle. Many AfS supporters expressed sympathy for the Resistance Movement, while regular passers-by came over to show support.

The Resistance activists discussed the race question with some AfS supporters; but unfortunately, they did not seem to be particularly ideologically conscious. While they thought it was important to preserve the White race, they believed it was more important to preserve the Swedish nation and its culture. The Resistance activists attempted to explain that the Swedish nation and its culture are direct manifestations and expressions of the White race. 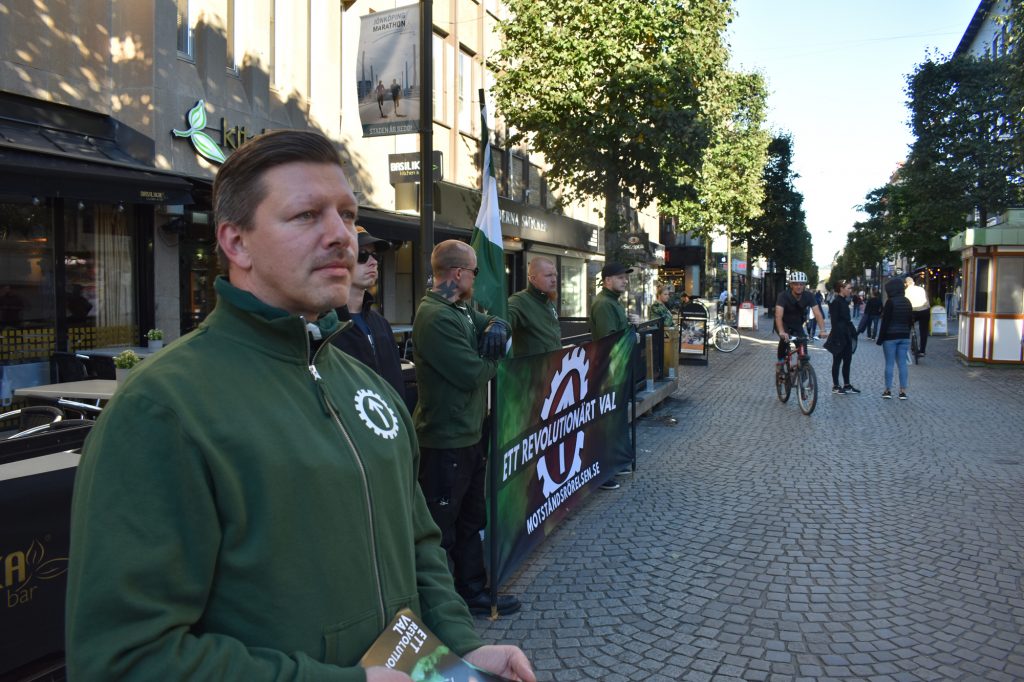 One of the activists argued that putting Sweden before race is like putting the cart before the horse. As long as the race is kept pure and healthy, the exact kind of cultural expressions that take shape are less important. But if you want to preserve specific cultural expressions at any cost, even at the cost of racial purity, these cultural expressions will gradually become corrupted by the racial characteristics of the new mixed race, eventually becoming completely unrecognisable and meaningless. 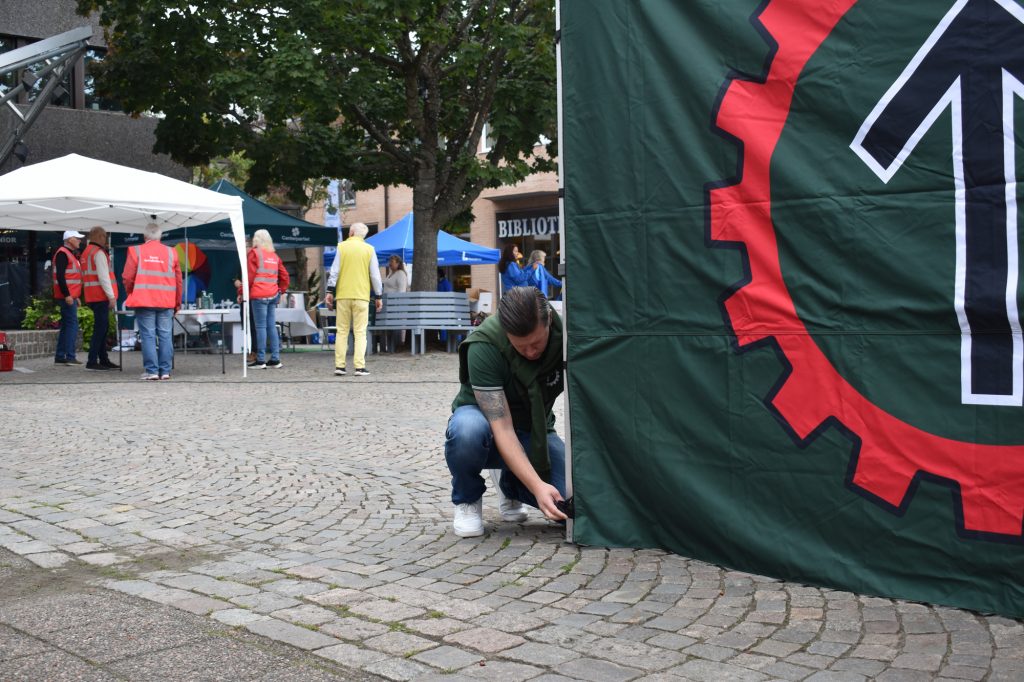 On Saturday the comrades were in Vetlanda and stood on the square with an election tent in the middle of the traitor politicians’ tents. The Tyr-rune-adorned tent was easily the largest and most impressive and drew the most attention from the people of Vetlanda. Many curious passers-by stopped to take information and ask questions about the Resistance Movement. 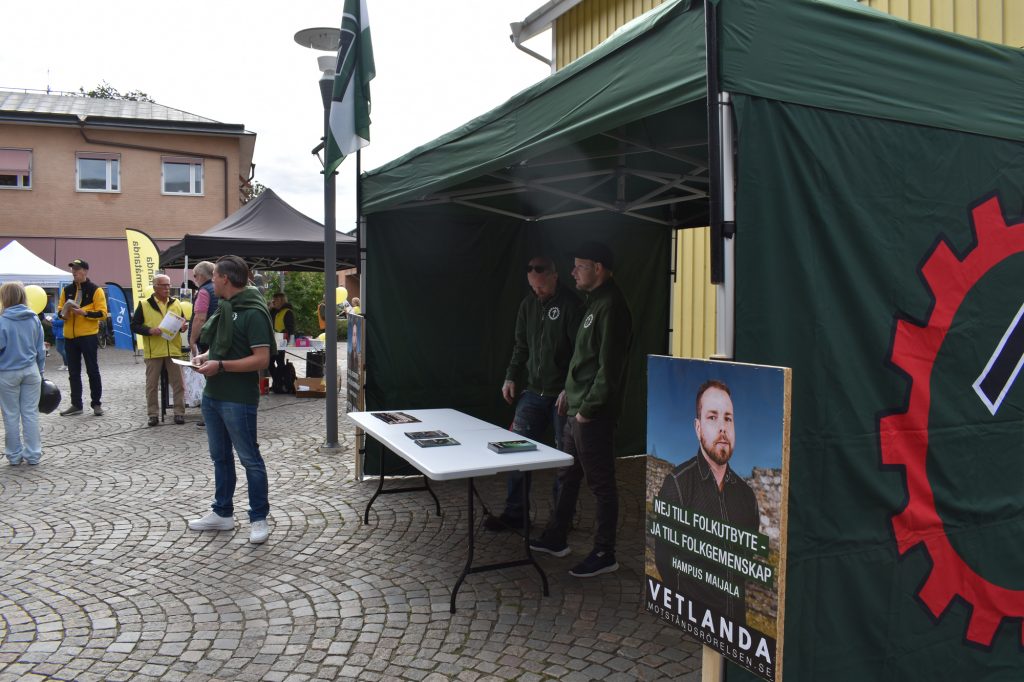 After a while, two police officers arrived and informed the Resistance activists that they did not have permission to be there, and that they only had permission to stand on another square farther away. As the other location was deemed worse than the one the comrades were already at, they refused to move. Eventually the police gave up and said that since there seemed to be room for everyone on the square, they could stay. 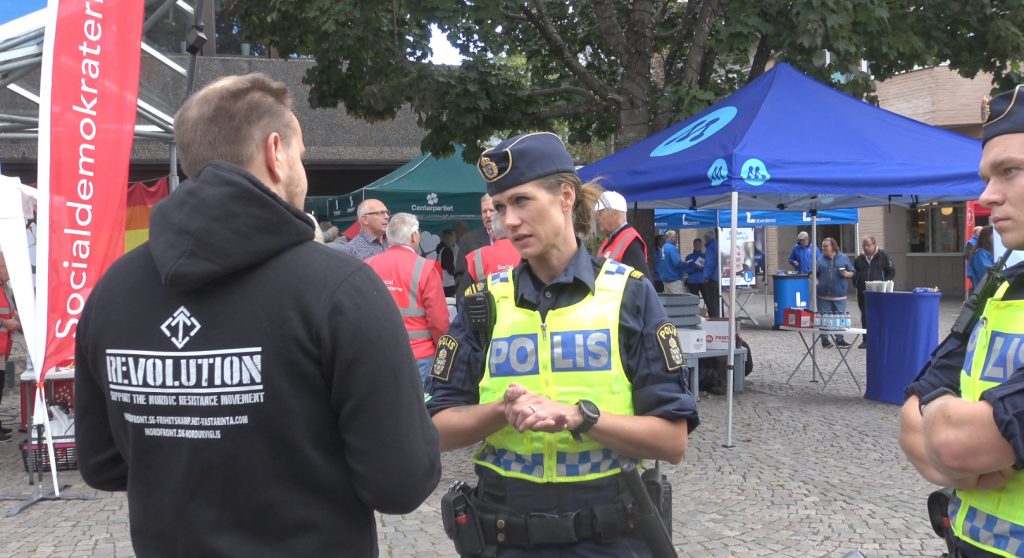 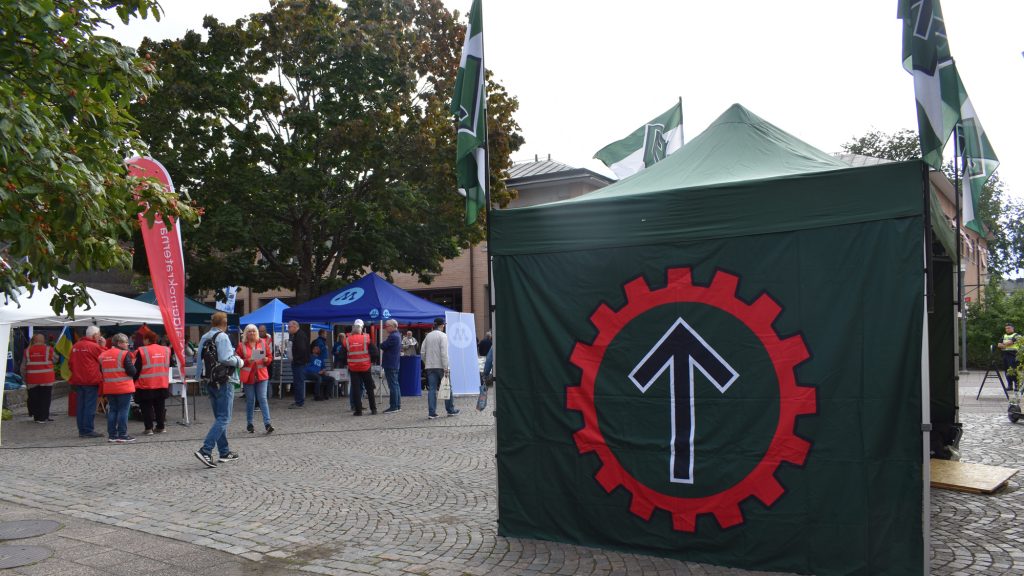 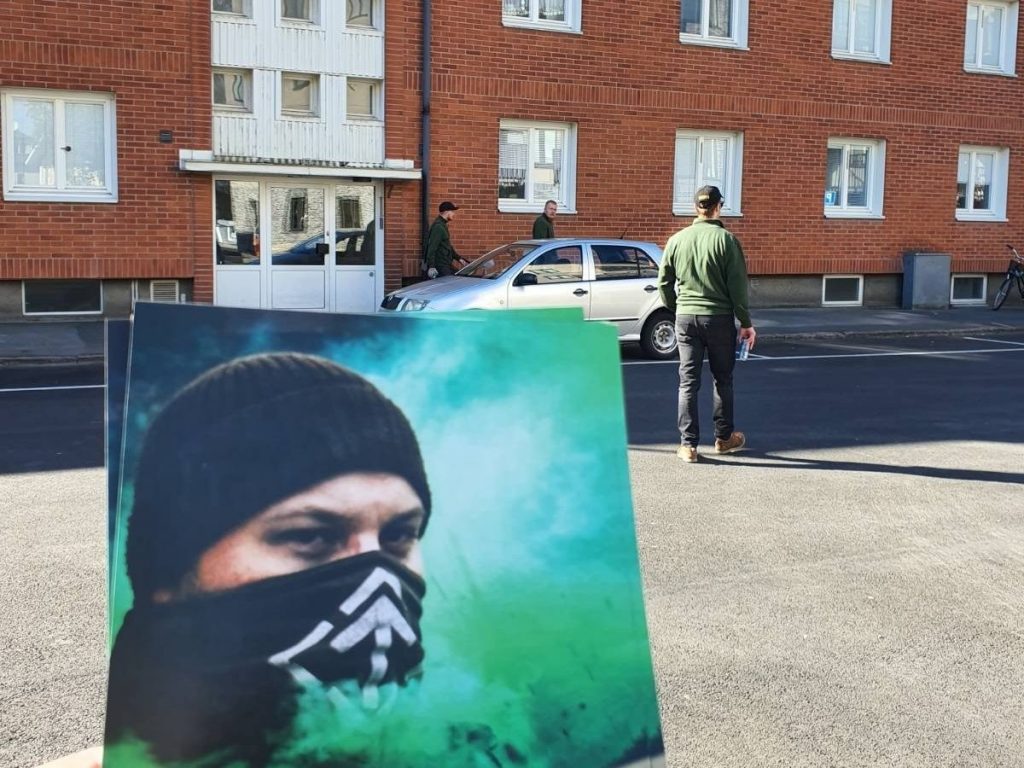 Sunday’s activism began in the morning with election information and ballot papers being delivered to mailboxes. The comrades divided themselves into two groups: one delivering material to apartments in central Vetlanda, and the other going to the outskirts of the city to leaflet residential areas. 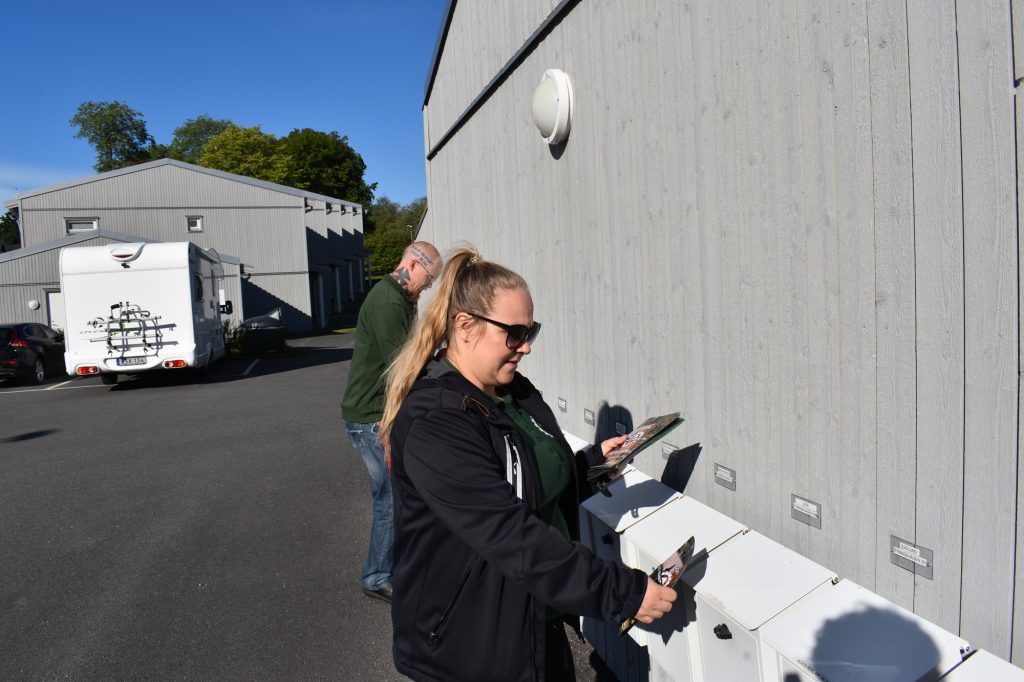 After a while of delivering election information, the groups reconvened and took a coffee break. They then went together to a bridge to hold a banner action. Many drivers showed their support for the activists. If the share of votes the Resistance Movement receive in the municipal election mirrors the proportion of drivers who gave the thumbs-up to the banner, we will undoubtedly be elected to the municipal council. 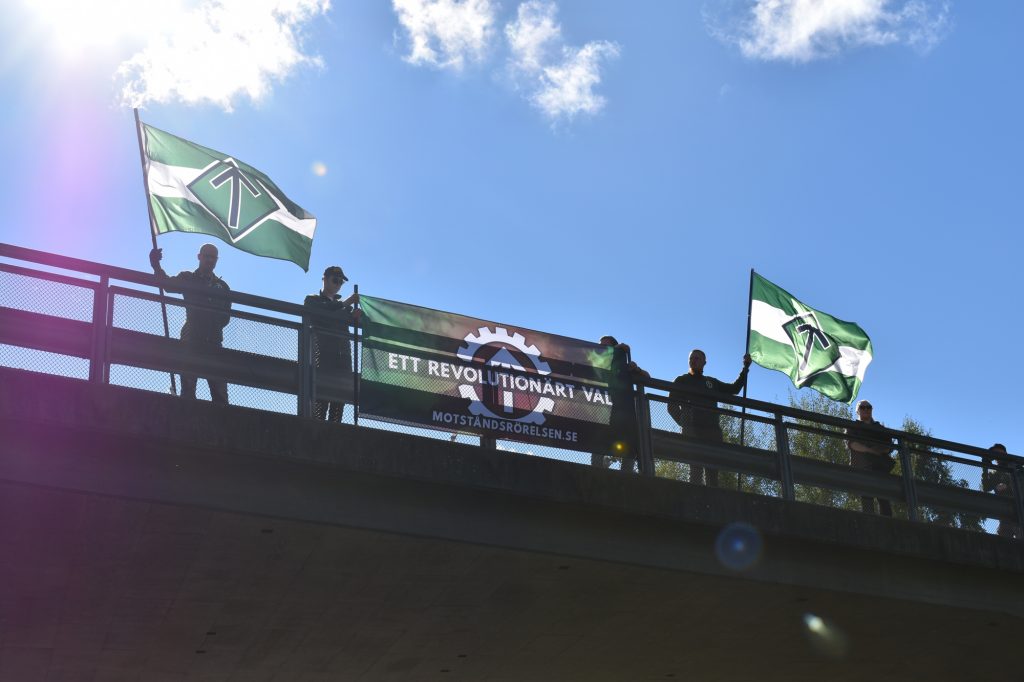 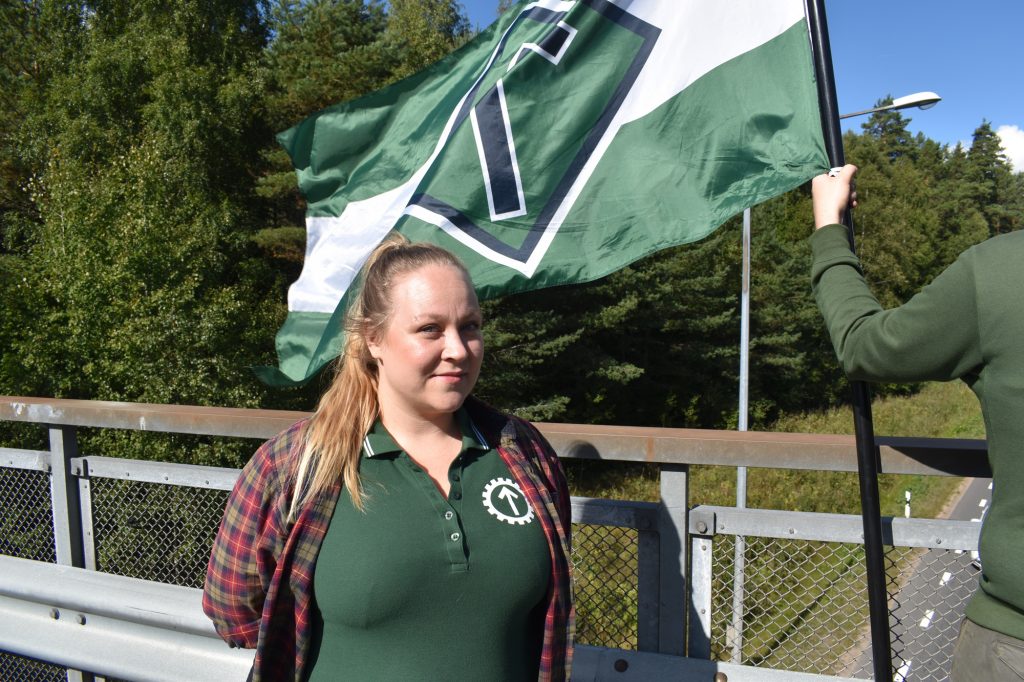