INTERVIEW. The activist and former responsible publisher for Nordfront.se is interviewed following his release from prison. 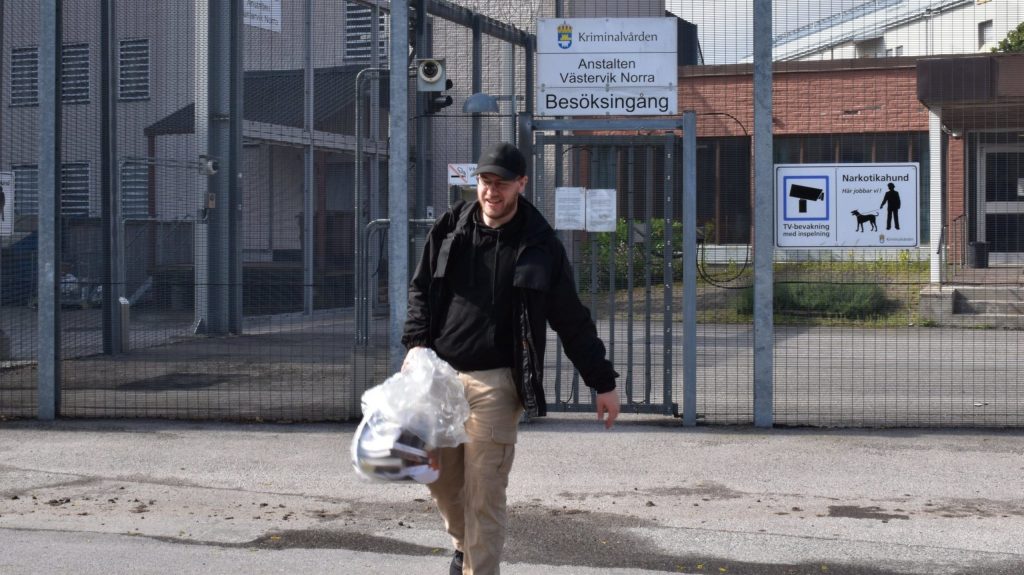 At the beginning of July, Marcus Hansson was released from prison after two months behind bars. In addition to his role as an activist in the Resistance Movement, Marcus is also a champion of freedom of expression and a writer for the Nordfront online newspaper.

How did your release from prison go and what were you there for?

I was there for two assaults and a disturbance after the confrontations in Lund where we fought back against several reds. I was never prosecuted when the same thing happened during the previous confrontation in Lund (even though the irate foreign investigator tried).

There was also a “racial hatred” sentence added to the final verdict because the Chancellor of Justice and the courts wanted to extend the protection for Pride parades.

My release from prison was quite simple, except for finding space in my bag for all the books that comrades in the organisation had sent me.

Several comrades from Nest 7 were waiting for me when I came out. I told them I wanted to drive the car on the ride back myself, as I hadn’t been able to do so for two months. It was like riding a bike again, so it wasn’t a problem. When I returned to Skåne, my comrades in Nest 3 had prepared a barbecue for me. Everything went back to normal pretty quickly again, as if I had never been in prison. The day after, I was involved in activism on the streets, this time in Småland.

The video from the confrontations in Lund that Marcus Hansson was imprisoned for:

Tell us a bit about your stay in prison.

I have spoken about this a little on Radio Nordfront already, but aside from a few intense days when I ended up in a bit of a conflict over my opinions, my stay was very uneventful. It’s hard to make reading and writing sound exciting when recounting your prison time, if you know what I mean? Not very much happened.

Is there anything you will miss about prison?

In prison there is a very simple structure, which comes naturally from the fact that the prisoners’ freedoms are severely limited. The food, kiosk, walking breaks, work-out periods, locking the cell doors – all this happens at set times. This forces you to read, write and do other similar things to counteract the resulting boredom.

In real life, there are lots of different distractions that steal your time. The removal of these distractions means that you actually get more freedom thanks to the extra time you have for things like reading, but also for experimenting with different schedules and such to attain higher levels of personal performance.

A simple example of a distraction is to see how much you can get done if you just decide to take away the internet for a week. I think that would make a lot of people more productive. I have written an article about this which might be published in the future.

I promised myself a few things that I wouldn’t do after my release in order to maintain a high level of productivity. I have failed in this regard to some extent already, as I read too much news and too few books. But I still haven’t casually browsed YouTube if it’s not for a news-related reason or something I want to learn about.

Another thing is that in prison you get your meals prepared for you. The day after I got out, I found myself thinking, “Now I have to make my own breakfast.” I miss that, even though I like cooking.

What did you miss most when you were in prison?

A proper bed, being alone, and going out in the woods. Because I was there during the first months of summer, I missed swimming in the lakes. I also missed simple internet searches for words or terms that I didn’t understand.

Do you feel like a free man now you have been released?

I think I feel much freer than those who haven’t been in prison. When your freedom is taken away from you, you appreciate it much more than when you have it. Some people may feel they don’t have to be in prison (yin, sour) to find greater freedom (yang, sweet); however, I am someone who appreciates such things. Running several kilometres and then swimming in a lake this summer will be something I will remember, maybe forever, which I probably wouldn’t have done had I not been imprisoned. To answer your question simply: Yes, I do.

Have the system’s reprisals affected you in any way?

Yes, and I think they affect everyone in some way. The question that is actually more interesting to ask is if, and how, you can use this influence for something constructive. Do you use it to get to know your strengths and weaknesses and mentally strive and act to improve yourself? Or do you let the experiences make you apathetic?

Unless you are working to improve yourself, the system’s reprisals will eventually consume you, as they will only increase with time. They have to, otherwise the system would gradually be surrendering its power to us. We as individuals, as a group and as a race must become stronger in order to gain power from the enemies who now rule over us.

He who instead becomes permanently indifferent to his fate and does not learn how the system works, or becomes apathetic about the situation, will be defeated and be forced to accept the directives imposed on him by the holders of power.

“Unless you are working to improve yourself, the system’s reprisals will eventually consume you, as they will only increase with time. They have to, otherwise the system would gradually be surrendering its power to us. We as individuals, as a group and as a race must become stronger in order to gain power from the enemies who now rule over us.”

How does your future look?

Prison affords a lot of time for self-reflection, something I personally have no problem with as I am so narcissistic. It’s worse for those who can’t stand themselves. With that said, I have some projects and thoughts I’m working on now that I’m out. I’ll have to keep the details to myself, though.

Apart from that, there will be more prison time in autumn unless a miracle happens, so I am already starting to prepare for it.

What have you done this time?

In autumn there are several “racial hatred” cases against me, which will lead to convictions, and which the Chancellor of Justice wants to extend even further. The convictions will most likely lead to additional prison time.

This witch hunt will also affect Motstandsrörelsens.se’s responsible publisher Hampus Maijala, as the Chancellor of Justice is attempting to ban Motstandsrörelsen.se from having pictures of Adolf Hitler in its photo archive.