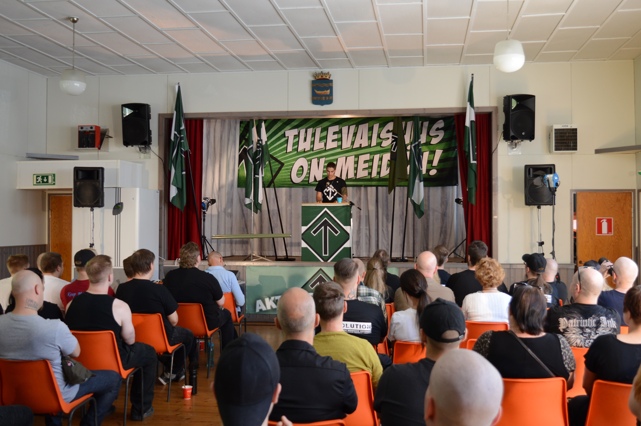 The event began with a speech by Nordic Council member Otto Rutanen. Rutanen spoke about the importance of the day, as well as the significance of the date on which it was held – exactly 114 years after the political resistance activist Eugen Schauman shot and killed the leader of the Russian occupation of Finland, Governor-General Nikolai Bobrikov, before committing suicide.

Schauman’s act of rebellion awoke the fighting spirit of the Finnish people and united them against their oppressors. Rutanen said the anniversary is a reminder that the time has once again come to exhort the people’s nationalist spirit and encourage them to become active in the struggle.

After Rutanen’s speech, everyone gathered to watch the raising of the organisation’s flags in the beautiful Nordic sunshine.

The day’s second speaker was Samuli Matilainen, who gave a very extensive and informative speech about Count Richard Coudenhove-Kalergi. Kalergi is of course infamous for his vision of a pan-European union (the Kalergi Plan), whose goal is the destruction of the European people by creating a new Euro-Asiatic-Negroid race in Europe led by a so-called “new aristocracy”.

The presentation explored how Kalergi’s virulent ideas have already become a part of the reality of modern-day Europe, thanks to the work of various shadowy organisations and political parties. These include the European Union and the Bilderberg Group, which are aggressively driving Europe towards Coudenhove-Kalergi’s dream of a globalised and racially mixed European federation.

After Matilainen’s lecture, Michael Hovila, the news editor for the Nordic Resistance Movement’s Finnish website, Vastarinta.com, gave a presentation about the site’s redesign and its extensive plans for the future. Hovila said the biggest changes to the website so far are a marked increase in content and a new, professional editorship.

Hovila also spoke about the working practices of the editorial staff and how they have opened the door to writers not directly connected to the Resistance Movement. He encouraged the audience to contact Vastarinta’s news editors if they are interested in contributing. Hovila added that the site’s redesign and relationship with social media has led to a strong increase in the number of visitors.

Next up was the event’s Australian guest, Darren Atkinson. Atkinson spoke about the formerly well-functioning ethnic-European Australian society and how things have changed in the country since the first mass immigration from China and the subsequent ethnic conflicts, including the riots in the 1860s.

Atkinson explained how the first ethnic conflict with the Chinese caused Australia to introduce the White Australia policy, which only allowed ethnic Europeans to immigrate. The policy lasted until 1973, after which non-whites once again flooded into the country, resulting in no-go zones in Australian cities.

Atkinson concluded his speech by talking about white people’s justification in defending their rights, stating we must fight now in order to save coming generations.

After lunch, Niklas Suomi took to the stage to give a presentation about the National Socialist worldview on the defense of biological diversity.

Suomi’s presentation focused on important questions regarding the exploitation of nature and the consequences for our environment and surroundings. He emphasised the significance of forested areas from a global ecological perspective and how mass tree felling affects people and wildlife, as well as ground water levels. He also talked about issues of chemical usage in agriculture and the cultivation of genetically modified crops.

Suomi went on to speak about the importance of opposing the exploitation of natural resources for short-sighted profits for international companies. He also stressed the importance of National Socialists’ embracing organic and natural ways of life in order to counteract the greed of capitalism.

Next, the Leader of the Norwegian branch of the Nordic Resistance Movement, Haakon Forwald, took the stage. Forwald spoke about the Movement’s development in Norway. He discussed the increase in activities in the country and how the organisation has forwarded its positions there. Forwald also stated that there has been a general increase in radicalisation in Norway, which has been clear to see during the Nordic Resistance Movement’s public activities in the country.

In addition Forwald urged members in both Norway and Finland to get active ahead of the coming election in Sweden. Both countries have large numbers of resident Swedes who are eligible to vote in the Swedish election, and Forwald said they need to be encouraged to cast their ballots for the Nordic Resistance Movement.

The day’s final speaker was the Leader of the Nordic Resistance Movement in Finland, Antti Niemi, who gave a presentation on the Movement’s ten-year history in Finland. The majority of the presentation centred on an emotionally charged retrospective of everything the Movement has accomplished during its time in Finland, much of which took the form of video footage from the Resistance Movement’s activities throughout the years.

Once the speeches were over, Niemi conducted a ceremony in which he appointed new activists to the Movement. He also revealed the activist of the year, Rami Joukanen – and presented a prize to the activist group of the year: the Helsinki group.

The awards ceremony was followed by a programme of sports activities. The disciplines for this year’s event were axe-throwing, stone throwing and tug-of-war. The participants were divided into various teams and competed against one another in a good-natured contest.

Once the winning team had been declared, it was time for a refreshing dip in a nearby lake, followed by good food and socialising. The event was rounded off by a visit to Eugen Schauman’s grave to honour the great man’s memory. A respectful memorial speech was held by his graveside, followed by a moment of silence in his honour. This brought an end to the official programme, and the activists spent the rest of the evening relaxing in good company.