EVENT. The chief of the Norwegian branch of the Nordic Resistance Movement Haakon Forwald gives his thoughts on the successful demonstration in Kristiansand. 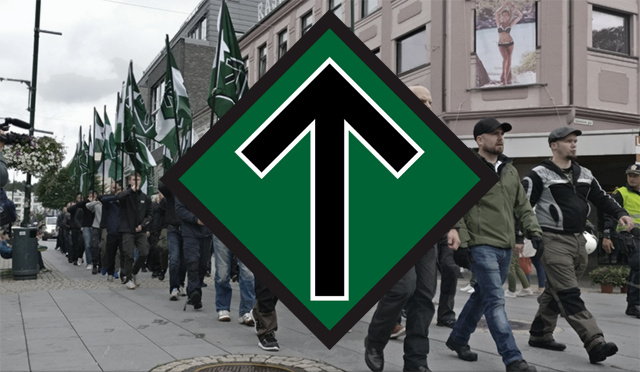 It is with a combination of both jubilation and exhaustion that I report on the Nordic Resistance Movement’s extremely successful demonstration in Kristiansand. As you likely already know, we originally planned to hold our protest against the state’s promotion of homosexuality in Fredrikstad, but after the police abruptly proscribed the event at the last moment, we were forced to change our plans.

The ban and the police’s reasoning behind it came as a great surprise to us. We expected resistance from counter-protestors and the system, as we anticipated the police to give special treatment to the homosexual lobby. But we did not expect that the system would use threats of violence from leftist terrorists as an excuse to ban our activities. In fact, even the Oslo police, renowned lawyers, freedom of speech experts, newspaper commentators and some members of our opposition agreed that such a step was a surprise.

We considered holding the demonstration in Fredrikstad in spite of the police’s decision; however, we soon dismissed this idea as counterproductive. Our mission was to promote our message and policies and to speak with local people, something that would have been impossible if there had been mass arrests and trouble with counter-demonstrators.

Nevertheless we were determined that the demonstration would go ahead. For practicality’s sake this meant we had to plan it “under the radar”, as we now knew the system would commit a great deal of resources to prevent its success. This was underlined by the disgraceful arrests of some of our Swedish activists the day before the protest. 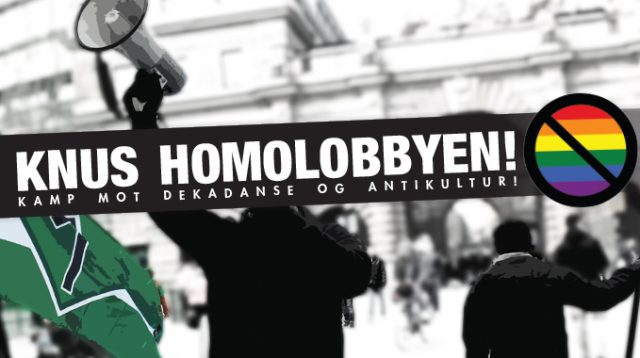 Several alternative sites were proposed for the new location. Oslo was one possibility, but seeing as the government is busily monitoring our activists in Eastern Norway, we decided holding a demonstration there might prove difficult at short notice. So instead we chose Kristiansand, a city in which we have a strong following and great support among local people.

Organising the relocation of the protest went well. We issued an official statement to our members, informing them they shouldn’t travel to Fredrikstad due to the change of location and because we wouldn’t be able to guarantee their safety.

As I’m based in Ludvika, in Sweden, I set off on Friday, the day before the event. We chose a less busy route into Norway in order to avoid the more controlled border crossings. This proved to be a smart move, as several other activists were stopped and arrested elsewhere. Once we had gotten a fair way into Norway, a police van that had been lying in wait started trailing us. It followed us for half an hour then turned off and wasn’t seen again. 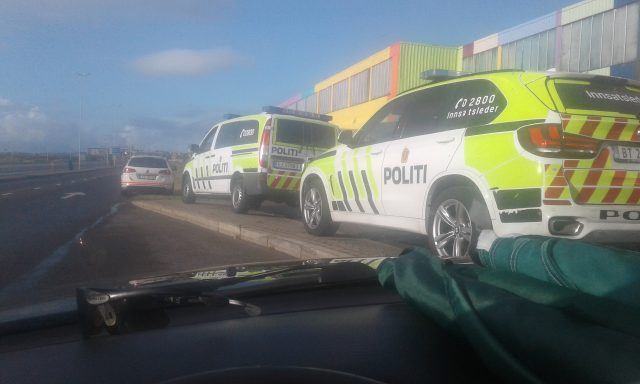 By the time we arrived at our destination it was about three in the morning. We were happy to see that a lot of people had made it there, including activists from Norway, Sweden and Finland. Whether we would be able to accomplish anything the next day, however, was still unclear, and that uncertainty didn’t diminish in the morning, when I woke up to the sound of a helicopter flying over the roof.

After sharing a few coffees with fellow activists over breakfast, we had a quick rundown of the schedule; meanwhile a separate group went down to Kristiansand city centre to assess the situation and see if the police were waiting for us there. We then went together to the rendezvous point and met the rest of our comrades who had travelled that day and gone there directly. However, we’d only had time to unroll our flags when a bunch of police cars immediately convened on our location.

That convinced us to go quickly to the city centre to ensure no one was arrested and the demonstration stopped. We brought our leaflets and flags, but unfortunately because of our need for haste the megaphone was left in the car. This was why we couldn’t make any loudspeaker announcements on our way into central Kristiansand and why no speeches were held once we got there. 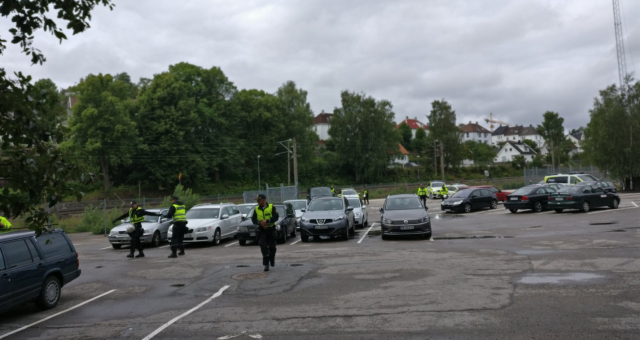 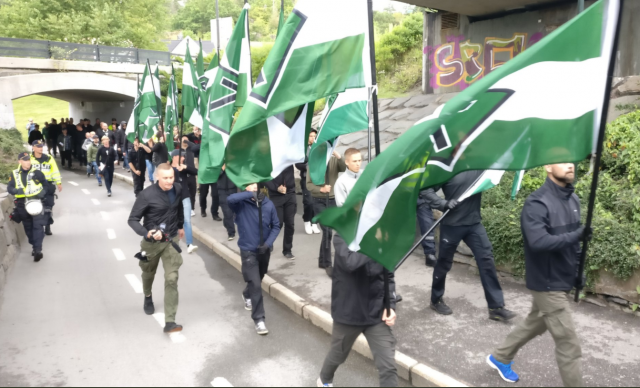 Our march to the city centre went well, as did our dialogue with the police. They explained that they wouldn’t attempt to stop us and that we could carry out our activism. We said that we planned to give out leaflets and talk with passers-by, which they informed us wouldn’t be a problem.

We subsequently had lots of interesting conversations with people in the city. We also took part in interviews with the press, including a live interview with TV 2. Up to one thousand leaflets were given out, and our goal of bringing to light the insidious nature of the homosexual lobby was unequivocally achieved. 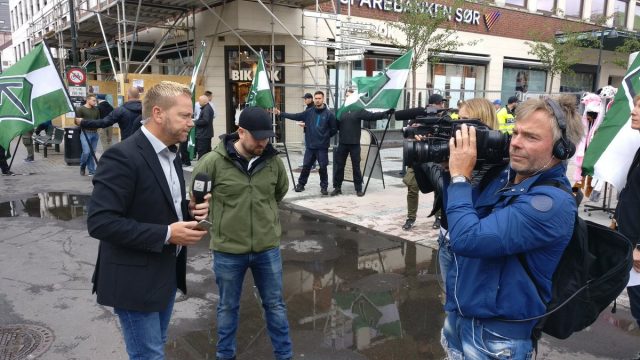 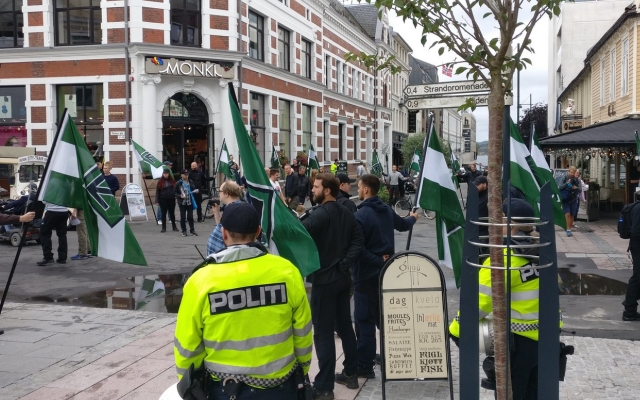 One or two rabid counter-demonstrators inevitably couldn’t help themselves from causing trouble, but this didn’t adversely affect us or our protest. We spoke frankly with a few opponents, with us putting forward our views, and they theirs. Hopefully they were able to see that we aren’t just “homophobic Nazis” but National Socialists with well-founded arguments as to why we oppose the harmful promotion of homosexual propaganda.

After finishing the demonstration, we went back to our cars, and the police carried out their inevitable ID inspection of all our members. Most people might think the registering of political dissidents is something that only happens in countries like North Korea, but I’m sad to report it’s customary practice in “democratic” Norway as well. 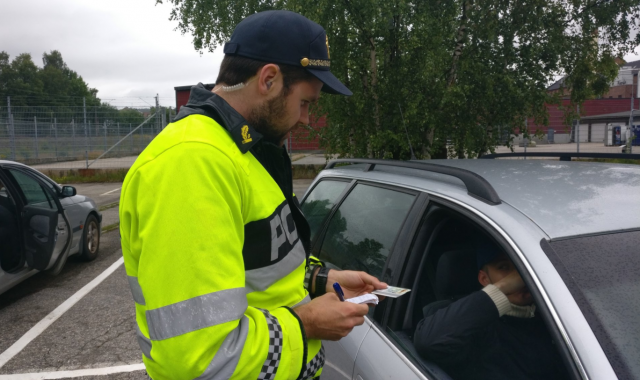 An unprecedented media storm
As expected, a huge media circus followed in the wake of our demonstration. Hypocritical counter-demonstrators, including traitorous politicians, whined to the fake media about the police “letting” us exercise our constitutional right to freedom of expression. They didn’t accept the police’s reasoning that they were protecting our right to demonstrate, or that they were attempting to ensure that the situation on the day didn’t escalate. Instead they complained that no group should further their message through threats of violence, even though the Nordic Resistance Movement has of course never engaged in such behaviour. In reality, it is we who are frequently on the receiving end of such threats, such as those that caused the cancellation of our demonstration in Fredrikstad.

Unsurprisingly, there were plenty of lies published about the day’s activities as well, mostly from self-avowed counter-demonstrators that the fake media portrayed as “regular people” in the city. These included claims that we would pay violent visits to people’s homes, that we spat at immigrants, and that the local population felt “scared”. All of these were, of course, untrue. 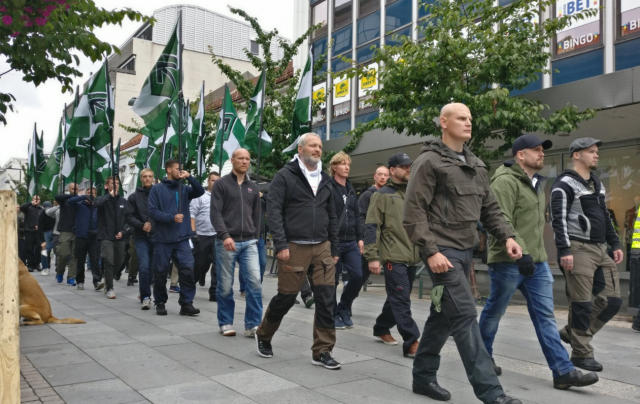 The process of preparing and organising the Fredrikstad demonstration, then having to switch our operations to Kristiansand shortly thereafter has given us a great deal of important experience. It’s vital that we as an organisation reflect on what we have done well, as well as what we’ve done poorly and where we can improve. It all helps to make the next demonstration even better.

In summation, the 29th of July was a great success for the Nordic Resistance Movement and marks the day in which we wrote ourselves into the history books. The event was covered by the entire Norwegian media, as well as outlets in Sweden and abroad; not just once, but in article after article. The attention from it was huge. Our website traffic is at an all-time high, and fresh applications from people wanting to get involved are rolling in.

The 29th of July was the day that the Nordic Resistance Movement defied the system’s attempt to silence us. It was the day we carried out the organisation’s biggest ever demonstration on Norwegian soil, and the first time a National Socialist demonstration was held in modern Norway. In short, history was written. I want to thank all the participants for a fantastic day. It was an honour to stand with you on the streets of Kristiansand.