REMEMBRANCE. The fallen nationalist Daniel Wretström was honoured in traditional fashion in Sweden’s Nest 1 and Nest 8 earlier this month. 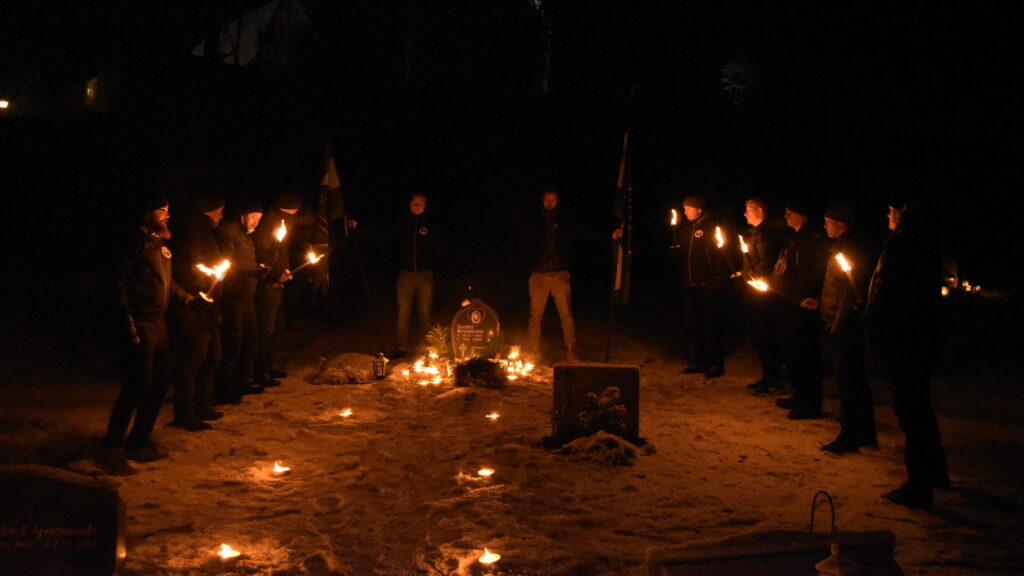 On Friday 9 December, the nationalist Daniel Wretström, who was bestially murdered by an immigrant gang 22 years ago, was honoured by members of the Nordic Resistance Movement’s Nest 1.

The evening began with members and activists travelling to the place in Salem, Stockholm County, where Daniel’s life was taken.

When the participants arrived at the site, a wreath was seen lying facedown in the snow, alongside a single extinguished candle. One member stood the wreath up against a stone, relit the candle and then lit an additional 14 large candles the comrades had brought with them to symbolise the fourteen words: We must secure the existence of our people and a future for White children! 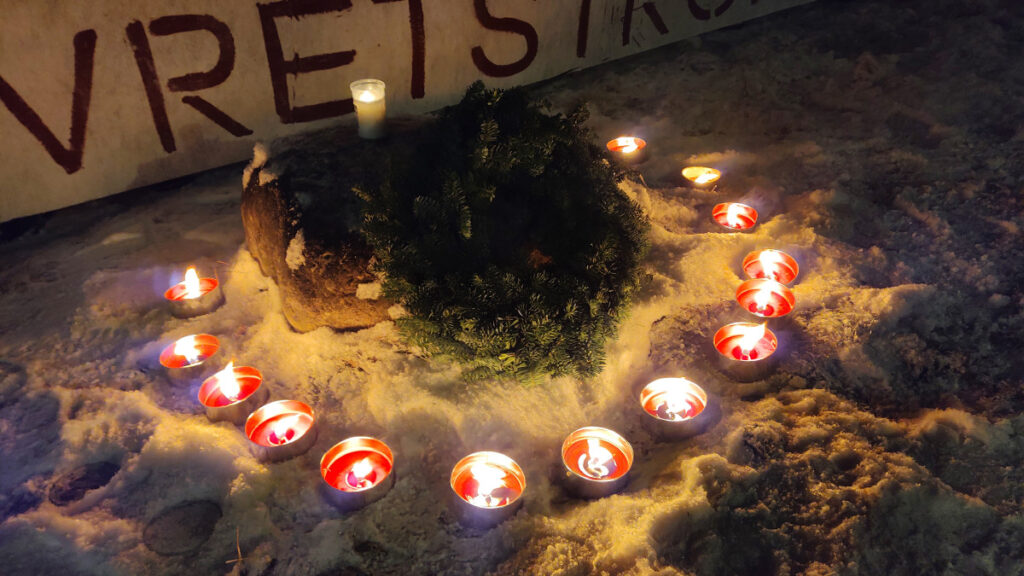 Next, a banner was unfurled with the message “We never forget Daniel Wretström”.

During the time the Resistance Movement stood with the banner, many cars slowed down to see what was happening and hopefully get some food for thought. One man, who was out walking his dog, came over to see what was going on. It turned out he knew about the murder and expressed his support and gratitude to those present. 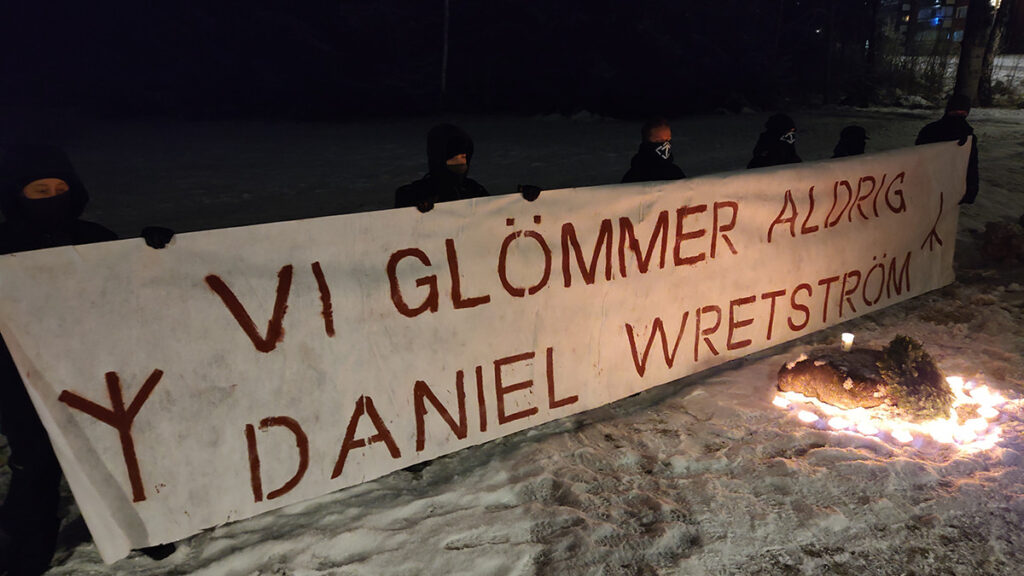 After half an hour at the location, one of the participants gave a short speech. The speech addressed the anti-nationalist rhetoric from the media and the state that preceded Daniel’s murder, as well as the protracted abuse Daniel endured, which ended with his throat being cut. The memorial concluded with a minute’s silence.

Keeping Daniel’s memory alive – despite all the years that have passed – is a duty for every nationalist. If we forget Daniel’s memory, we forget the memory of all the Swedes who have been killed, raped and desecrated on the altar of multiculturalism.

Afterwards, the group moved on to put up banners with the same message in well-chosen places in Stockholm. 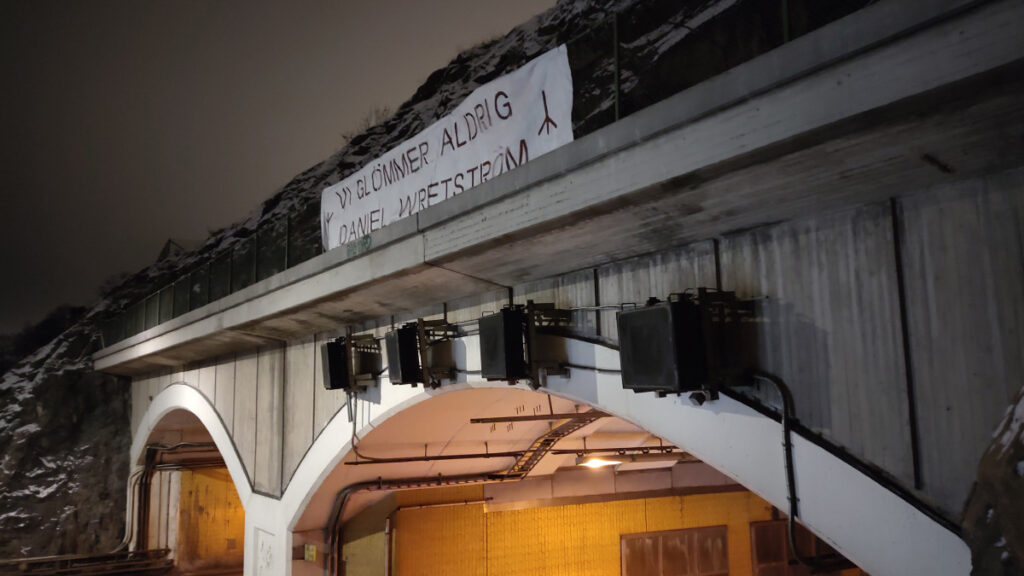 Daniel may no longer be with us, but, through our actions and struggles today, he lives on!

On Saturday 10 December, Nest 8 conducted several activities in memory of the fallen nationalist.

Activists travelled together to one of the central squares in Västerås, where a speaker stood atop a platform surrounded by flags, a banner and Resistance men. His speech was both intensive and emotional, covering everything from Daniel’s life and deeds to his martyrdom. After the speech ended and passers-by had been given suitable leaflets, the participants moved on to the next location. 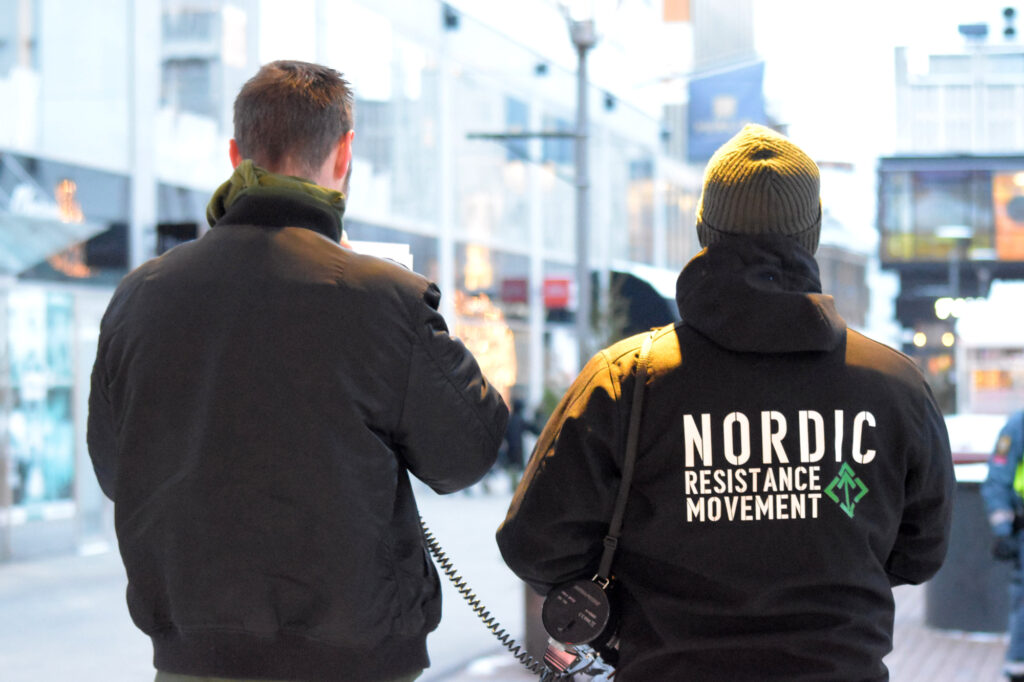 Why do we stand here after so many years and talk about Daniel’s murder? Daniel’s death lit a flame, a flame that illuminated the darkness we live in, and lit a fire in the chests of thousands of Swedes. This fire was one of anger and hatred against the system, which has the blood of hundreds of Swedes on its hands as a result of the multicultural hell they imposed on our people.

On the way out of the square, the group stopped at the office of the Vestmanlands Läns Tidning newspaper. An activist with a megaphone delivered some choice words to those inside the building, before everyone gathered outside the gates to remind the members of the anti-White press that their lying mouths will one day be silenced.

Daniel is the ultimate symbol of resistance against anti-Swedish violence! 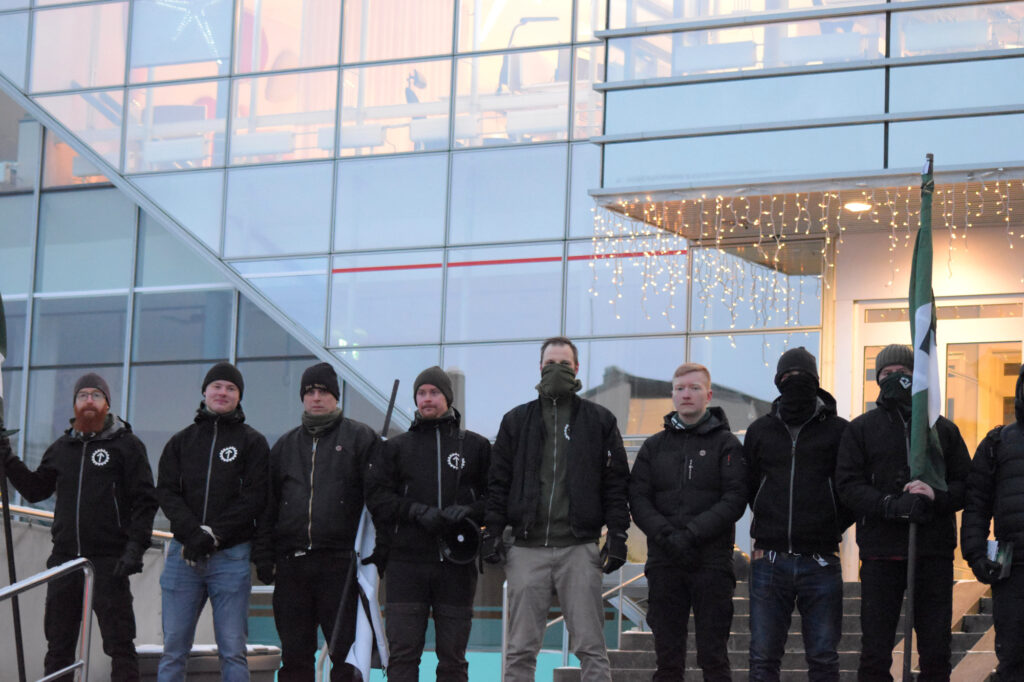 When darkness began to fall, the group went to a bridge next to the E18, where a large banner in Daniel’s memory was unfurled alongside green smoke and Tyr rune flags.

A racial foreigner did not seem to appreciate the honouring of murdered Swedes and drove past twice, shouting unpleasant things, such as what he wanted to do with the activists’ mothers. He came back a third time and stopped his car, claiming that someone had thrown a bottle at it. The police quickly intervened, so nothing more happened besides a few shoves and verbal exchanges.

On this day, too, Daniel’s flame will illuminate the darkness and light a fire of hatred in our chests. 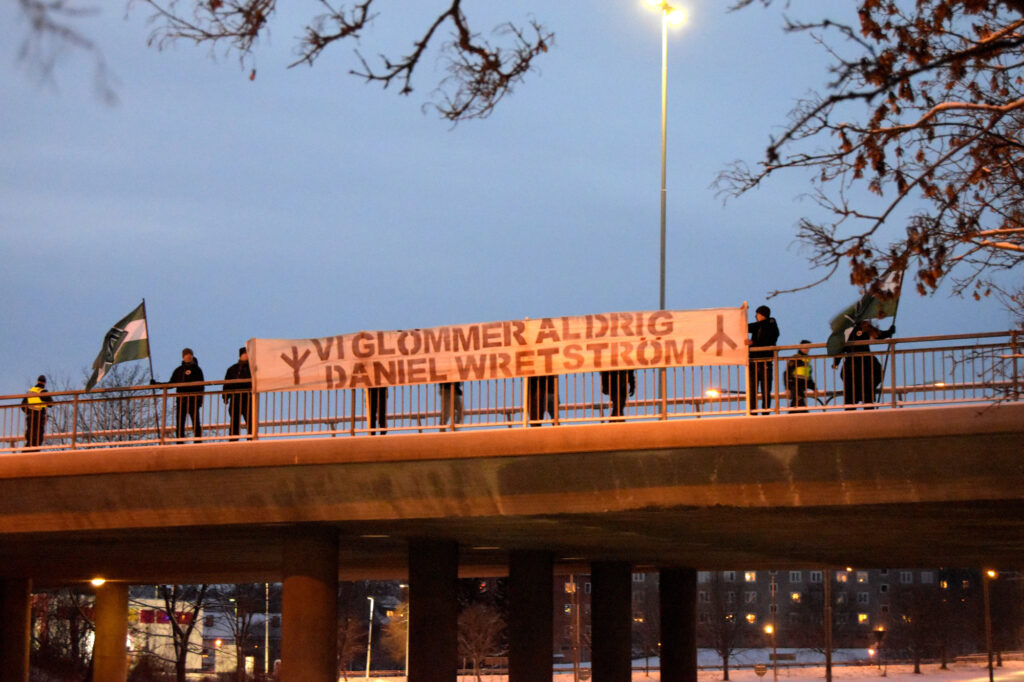 The final part of the day consisted of a journey to Sura Church, where Daniel lies buried. However, before the activists could drive there, the police decided to flex their muscles by searching all of the participants and their vehicles. After the police harassment, the activists continued with their plans.

Once at the church, the group walked together to the grave with lighted torches and a wreath of flowers. The wreath was laid down and everyone lit a candle to place beside Daniel’s final resting place. The ceremony was concluded with a short proclamation by the memorial attendees: 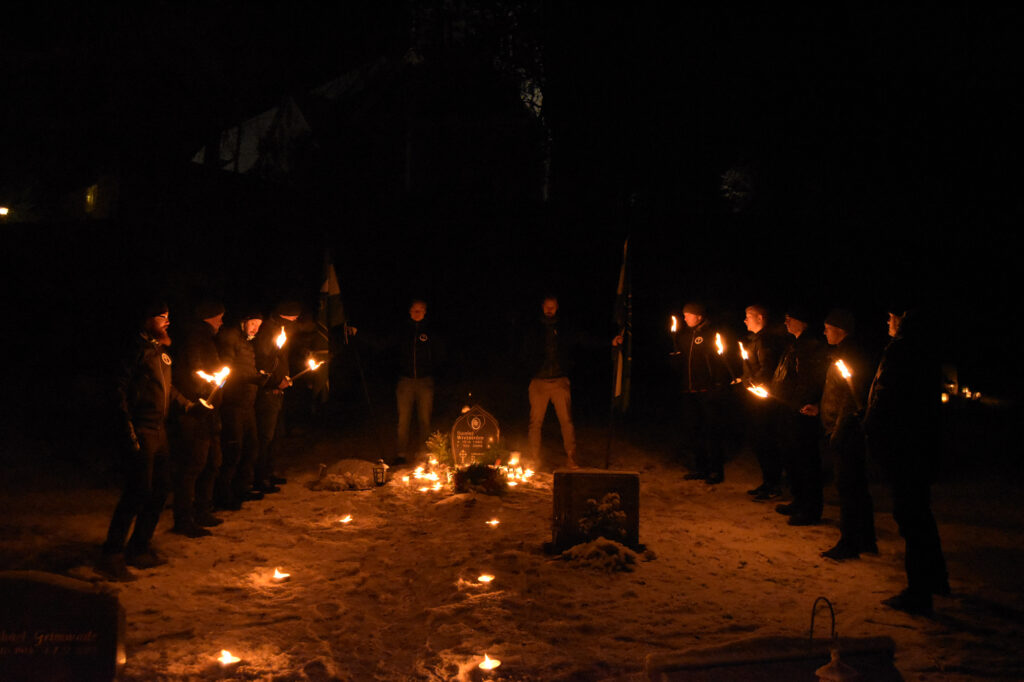