INTERVIEW. We interview the newly appointed Nest Chief of Sweden’s Nest 8, Jimmy Thunlind, about why he joined the Resistance Movement, his duties as Nest Chief, and the Nest’s future goals. 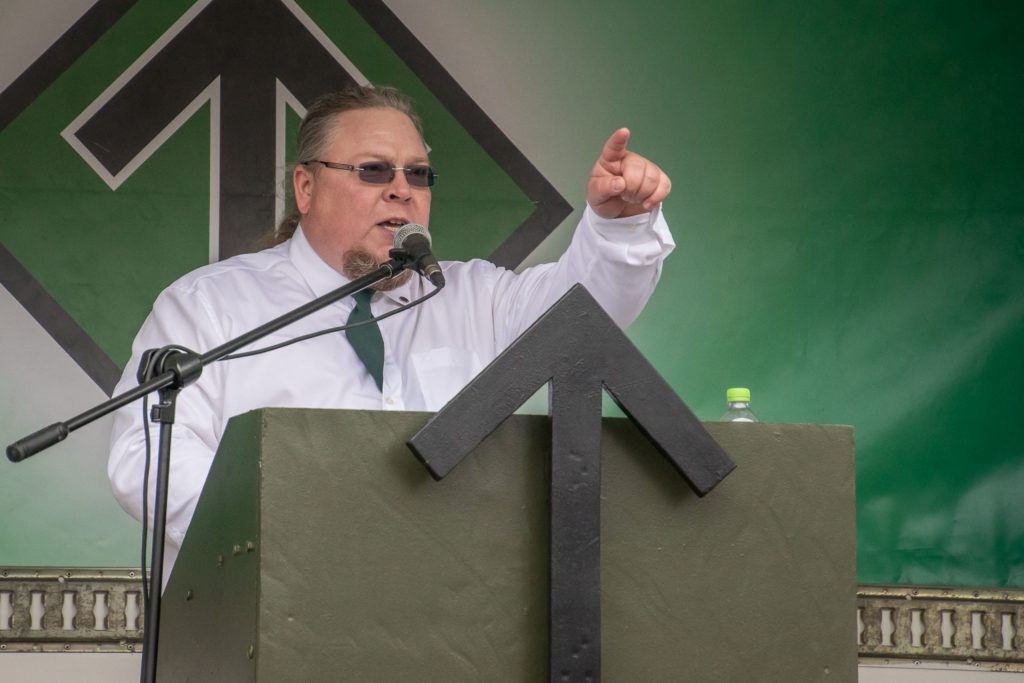 Jimmy Thunlind, you are the Nest Chief for the Nordic Resistance Movement’s Nest 8, which comprises the provinces of Södermanland, Östergötland, Närke and Västmanland. Can you begin by telling us a bit about yourself, your background, your political awakening and your activities before joining the Nordic Resistance Movement? What decisive factors convinced you to join?

I became very interested in politics and social issues early in my life, when I was just 13. I read everything I came across about different political viewpoints. As a 16 year old, I finally settled on National Socialism as the most sagacious and only worldview based on the natural order. Up until 2002, I was periodically involved in the Sweden Democrats, the Nordic Realm Party and the Swedish Heathen Front, respectively, but none of this engagement fully met my expectations.

In 2016 I was impressed by the Resistance Movement’s demonstration on 1 May in Borlänge, which I saw on TV. Shortly afterwards, I came across a public leaflet distribution in Norrköping and was given a leaflet. I went home and read the party programme Our Path and lots of articles on Nordfront and felt, “Now I’m finally home!” This was what I had been waiting for all my life – a true National Socialist organisation that was both ideological and activism-focussed.

I was active from the start and participated in basic activism and in the major demonstration in Stockholm on 8 November, 2016. I also started writing articles for Nordfront, but I kept a low profile at the time and wrote under the pseudonym Leif Eriksson, partly to protect my family and partly because I was working as a production manager at a well-known Swedish company. I was also given the responsibility of being the treasurer for the Activist Group I belonged to.

You are not new as a Nest Chief and have also had some form of leadership position within the Nest since it was formed in early 2019. First you were Chief of the Nest’s Member Group until July 2019, when the Nest and the organisation were subjected to a coup attempt, which led to many people in positions of responsibility in the Nest leaving the organisation. Amidst this situation, you took over as Deputy Nest Chief, a position you held until November last year, when you were appointed as the permanent Nest Chief. How do you view the development of the Nest from its formation until now?

In the initial period after the Nest was formed, everything was on the up and activities were flourishing. As such, it came as a shock when the coup attempt happened and split the Nest in the summer of 2019. Half the Nest then left the organisation, including most of those with responsibilities, and all the leaders except me. However, we were determined to continue the fight and survive as a Nest. Half in shock, I took on the task of leading and reorganising. At that time, we were a few members, a leader and two activists. But I knew that there was good fighting spirit and potential in many comrades, and after two months we had new people in most of the positions. We also had to start building the Nest fund from scratch because the Strasserists stole the existing one. But with the help of members’ generosity and donations from sympathisers, we were able to rent venues for our meetings and build up a media department.

Basic activism has always been ongoing in the Nest, but now we’ve also started to hold regular town square rallies with speeches, and to produce films. Over time, two new activists were appointed, and I had the pleasure of appointing two qualified Group Chiefs, and was able to divide the Nest into two Member Groups. Together, we have invested heavily in gaining visibility and attracting citizens’ attention – via public actions, speeches, poster demonstrations, spectacular actions and laser activism.

The most gratifying result of all this is that we have had plenty of membership applications and welcomed many new members since the split, who have replaced those who left the organisation.

How would you describe the difference between the roles of Group Chief and Nest Chief?

As a Group Chief, you have much closer and more regular contact with all members; as a Nest Chief, you don’t have time for that, but mainly have contact with Group Chiefs and those responsible for specific tasks. In addition, there is a lot of responsibility and many tasks involved in the role of Nest Chief, such as planning and conducting monthly meetings and major activities, communication and business with the National Leadership, contact with outsiders, disciplinary matters and more.

You made yourself known as an esteemed speaker quite early on in the Nest and the Movement. What was it in your background that led you to this? When and where did you give your first speech in the Nordic Resistance Movement? What did you talk about then? What do you think makes a good speaker?

I think it’s in my blood. Ever since I was very young, I have loved performing in front of people – whether it’s theatre, music or speech. I gave my first public speech when I was nine years old. It was a five-minute student presentation, in which I read a few verses from the Bible and explained what they meant. This was on account of my parents joining a Christian congregation when I was a child, where they had a school that trained members in speaking and rhetoric. When I grew up, I left the congregation but had a good foundation as a speaker.

My first unofficial speech in the Resistance Movement was in March 2017 at a social event in Finspång, which was then in Nest 1. The topic was “The Revolution Is Coming!” I gave my first official speech on 1 May 2018 in Ludvika, where I expressed strident criticism of the Marxist trade unions and emphasised the necessity of National Socialism.

I think a good speaker speaks simply, straightforwardly and directly to people. He puts his own feelings into the speech and enlivens it with images and humour. Furthermore, the speech should be well arranged with a rousing introduction, clear main points and arguments, and an inspiring conclusion. The speaker must not be too stiff in his posture, and must have a voice that carries. And, of course, he could just as easily be a she.

Town square meetings with speeches have several advantages over just standing and handing out leaflets. The meeting format attracts more spectators. People around us can hear our message, even if they don’t want to read a leaflet. It makes a more prepared and organised impression, and therefore a stronger one as well.

The pandemic hysteria doesn’t affect our ability to hold town square meetings, as long there aren’t too many of us. But the pandemic has disadvantages, such as fewer people being out in public environments, and fewer daring to come forward and meet us. The only advantage of the coronavirus is that it seems to affect the reds the worst, because these days we never catch a glimpse of them!

The purpose is to advance the art of public speaking and train more speakers in the organisation. In the future, we may well end up in a situation where we don’t have the internet or radio, and then speech will be our main means of struggle, along with leaflets and printed writings.

Via training, most people can learn to speak in public, but only those who also have some innate talent for it will become good speakers.

Of course, there are different kinds of good speakers. Some are gifted at speaking freely from the heart and telling funny stories, and they are excellent in certain situations. Others can be incredibly adept at explaining things calmly and educationally so people understand them, and they have an important place. And then there is the third kind – the agitators – who have the ability to influence the audience’s emotions and give them goosebumps, cause them to shed a tear, or incite them to want to take action. The very best speakers can be all three.

Right now we’ve only just started our speaking school, but I think it’s working well. My secret goal is that at least 80 percent of members will eventually stand up and speak in front of a small group, and that 10 percent will become speakers at large meetings.

The national leadership of the Nordic Resistance Movement advocates increased application of new, innovative and sometimes spectacular forms of action. To what extent has Nest 8 lived up to this so far? Do you want to say anything about your future plans in this respect?

We have tried to live up to it in different ways – via targeted messages at special events, “installations” of sensational props in public places, and laser-projected messages. This work is constantly ongoing, and I expect further imaginative special actions this year.

Many say that the struggle is in a darker time now, compared to a few years ago, with more censorship and increasing repression. Some forms of activism have become more difficult or even impossible to conduct due to the restrictions that those in power justify with the corona pandemic. They are trying to outlaw the transmission of the Nordic Resistance Movement’s views, and they are clearly looking for ways to enforce a total ban on the organisation. How do you think all this affects the strategy for the struggle in the organisation… and within the Nest?

I see it as further proof that we’re right and that we’re touching a very tender nerve when we continue to criticise Jewish power, their lackeys and their methods. The resistance makes us stronger and forces us to hone ourselves further – become smarter, find new paths and hit harder. And never back down!

Unlike the cultural nationalist and ethnonationalist organisations in the Nordic countries, the Nordic Resistance Movement professes the National Socialist worldview – which is heavily stigmatised by the establishment. We are sometimes advised to drop this “excessive orthodoxy” in order to grow quickly. Is this recommendation not worth considering?

Absolutely not! By adapting in this way, to what are in fact the Jewish norms, we will either be liberalised until we are absorbed by the system, or fade away. The Sweden Democrats are a good example of an organisation that has “toned down” the extremes, and today they are lackeys of the system.

What other reasons could there be for a Swede in one of the provinces of Södermanland, Östergötland, Närke or Västmanland to want to join the Nordic Resistance Movement’s Nest 8?

In addition to what I mentioned previously, and the fact that National Socialism is the only rational worldview, the Nordic Resistance Movement comprises a fantastic folk community. We meet for small and large gatherings, we train together, watch films and hold study circles, meet socially and go on excursions and other adventures. Our movement has a place and a task for everyone, regardless of who you are or which talents you have. We support and help one another with a comradeship you won’t find the equivalent of anywhere else. So do not hesitate, apply today!

Thank you, Jimmy Thunlind, for your time and answers!

A woman in the Resistance Movement: Interview with Marie from Sweden’s Nest 8