COMMENT. The leader of the Resistance Movement comments on Rasmus Paludan’s recent Koran burnings in Sweden and the ensuing riots. 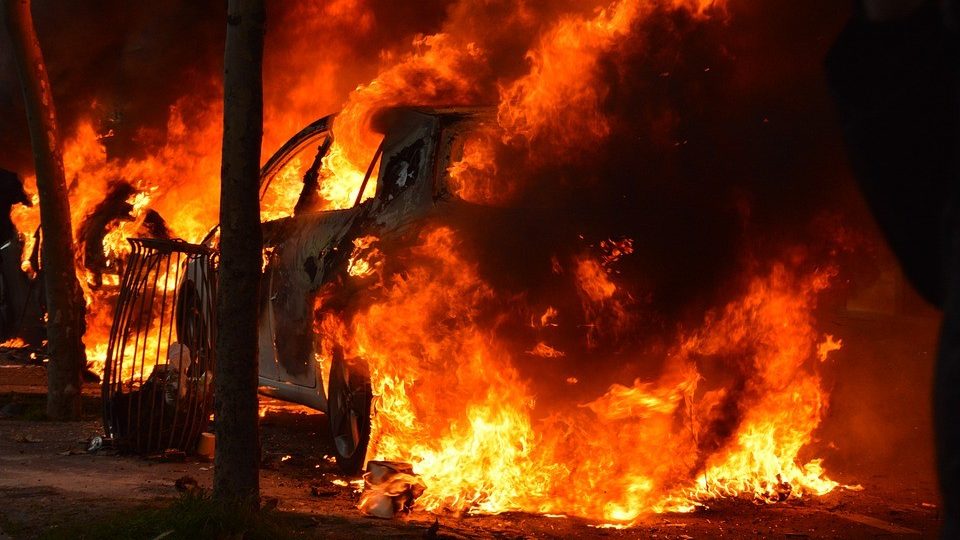 I want to begin by clarifying that I do not sympathise with Rasmus Paludan. On the contrary, I detest him personally due to his paedophilic inclinations and because I strongly disapprove of the counter-jihadist politics he pursues.

Attempting to shift focus from race and blood to religion and culture is incredibly detrimental to our cause and, as I have previously stated on our Swedish podcast Ledarperspektiv, a form of Cultural Marxism.

Rosengård or Rinkeby, or for that matter Somalia or Afghanistan, would not suddenly flourish and transform into paradises on earth if people there started going to church or became atheists instead of being Muslims. Likewise, the Nordic countries will not be saved by Christianity and conversion, but by National Socialism and repatriation!

As for the actions that Paludan conducts, in which he travels around Denmark and Sweden to burn Korans at authorised public rallies, I have mixed feelings about them. Aside from the fact that it has the wrong political focus, I also think the act in itself is both disrespectful and infantile, and I would never do such a thing myself.

At the same time, I understand that the purpose is to create a reaction, and when suburbs and cities are turned upside down, riots are taking place and police vans are in flames, then it’s hard to say it hasn’t been successful in that aim. It is a very positive thing for Danes and Swedes to see how racial foreigners behave and how feebly the police act, or more accurately, how they do not act.

Because, after all, this is about racial foreigners and not Muslims. Of course, I have no statistical evidence for this, but I am 100% convinced that only a very small number of those who attacked the police with stones and set their vehicles alight are devout Muslims who live in total accordance with the word of Muhammad and are faithful mosque-goers. Instead it’s more a case of non-Whites behaving like non-Whites often do in many countries around the world, regardless of whether those countries are inhabited by Muslims or not.

Furthermore, it is beneficial for the people to see how the establishment treats the racial foreigners with kid gloves; e.g., when the police retreat, abandoning their vehicles to be stolen and set on fire. As an amusing detail, this can be compared to the level of violence the police use against us in the Nordic Resistance Movement when we conduct completely peaceful political activism. Contrast it with the demonstration in Gothenburg in 2017, for example. The difference is immense.

A couple of politicians and newspaper editors have condemned the actions of the rioters, but imagine if we in the Nordic Resistance Movement were to attack the police with stones and steal their cars. In such a case, I guarantee the headlines on the front pages would be about terrorism and the holocaust to such an extent that Covid-19 and the Ukraine war would look like minor stories in the local rag in comparison. The media would not stop their witch hunt until all influential figures in the organisation were behind bars with the keys thrown away. The difference here would be even more pronounced.

So it’s good if Paludan’s actions can get people to see not only how racial foreigners behave, but also how the establishment protects them in spite of their behaviour.

Because if these politicians and editors had the slightest amount of honour in their bodies, they would have asked the entire Swedish people’s forgiveness for creating the current situation via decades of work dedicated to opening up our borders. If they had the slightest amount of goodwill towards the people, they would immediately demand the ghettos be cleared out and that repatriation begin.

However, they feel neither decency nor benevolence, so that will not come to pass. Or at least not a second before they’re on their bare knees in the mud in Finspång, asking the people’s court to pardon their pitiful lives.

All in all, it may seem that I consider Paludan’s actions to be more right than wrong; however, there is another major flaw to them I have not mentioned, and that is his total dependence on the system. Without large-scale support and protection from the police, he would never be able to do what he does. Paludan is not a revolutionary and definitely not a strong force. He and his ilk are no salvation.

He may be able to point out some of the symptoms, however badly they are presented, but he will never be able to solve the problems. As a counter-jihadist, he doesn’t even want to. As such, he should not claim to be in a position to do so via his party’s activities.

Either that, or the people of the Nordic countries will face the result of our passivity, and it will certainly not be merciful. I cannot see any other alternatives for Sweden and the North.