Home Resistance News Activism Nest 1 on the streets of Stockholm

ACTIVISM. On Valentine’s Day, Nest 1 visited Odenplan plaza in Stockholm to distribute the Nordic Resistance Movement’s new leaflet and talk with the people. 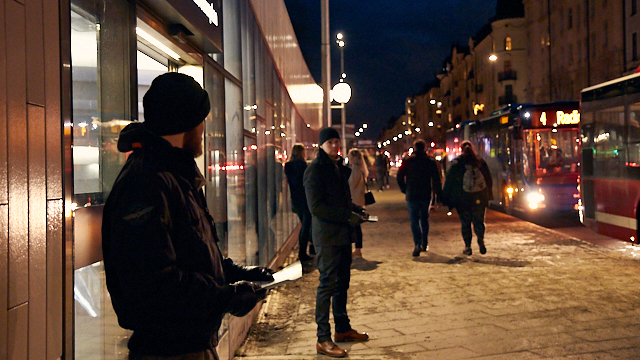 An activist group from Nest 1 took to the streets of Stockholm on 14 February. They set up at Odenplan in the city centre and began handing out the Movement’s new leaflet: “The Revolution Begins with You!”

From the beginning, people showed great interest in the leaflet, and they were soon being handed out in droves.

After the activists had been standing on the streets and spreading the message in relative peace for a while, an unknown beta male decided to attack one of the activists on site. The traitor was quickly outmanoeuvred and neutralized, and fled the scene in a hurry.

The Resistance men and women subsequently returned to handing out leaflets. Many conversations took place, both with ideological adversaries and sympathizers returning home from work in the evening rush hour. Even the “Young Left” decided to come and stand around, staring dumbfounded with a banner of their own.

The activism was very successful, with the people in the capital city now being better informed as to why they should join the struggle against the oppressive system, and why passivity is not an option.