ACTIVISM. On Tuesday 24th March, activists from Nest 3 warned the people of Kristianstad about a local paedophile, Jimmy Nilsson, who was recently released from prison.

Jimmy Nilsson was sentenced to seven years’ imprisonment in 2015 for aggravated rape against children, aggravated sexual assaults against children, child pornography offences and the taking of illicit photographs. He has previously worked at over 30 nursery schools in the Kristianstad area but was not caught until summer 2015 when he groped a 10-year-old girl while working at the High Chapparal theme park in Småland. When the police raided Nilsson’s home, they found 300 pairs of children’s underwear and a mass of child pornography. The children he assaulted were mostly been between the ages of one and three years old. Nilsson, who admitted all of the charges and cooperated with the police, has now been released into society after serving four years of his sentence.

The Nordic Resistance Movement regards the release of this sick person by the Swedish legal system after just four years as a betrayal of all his victims and society in general. As such, activists from Nest 3 responded by distributing leaflets and putting up stickers and banners around Kristianstad to inform people and warn them about Jimmy Nilsson. 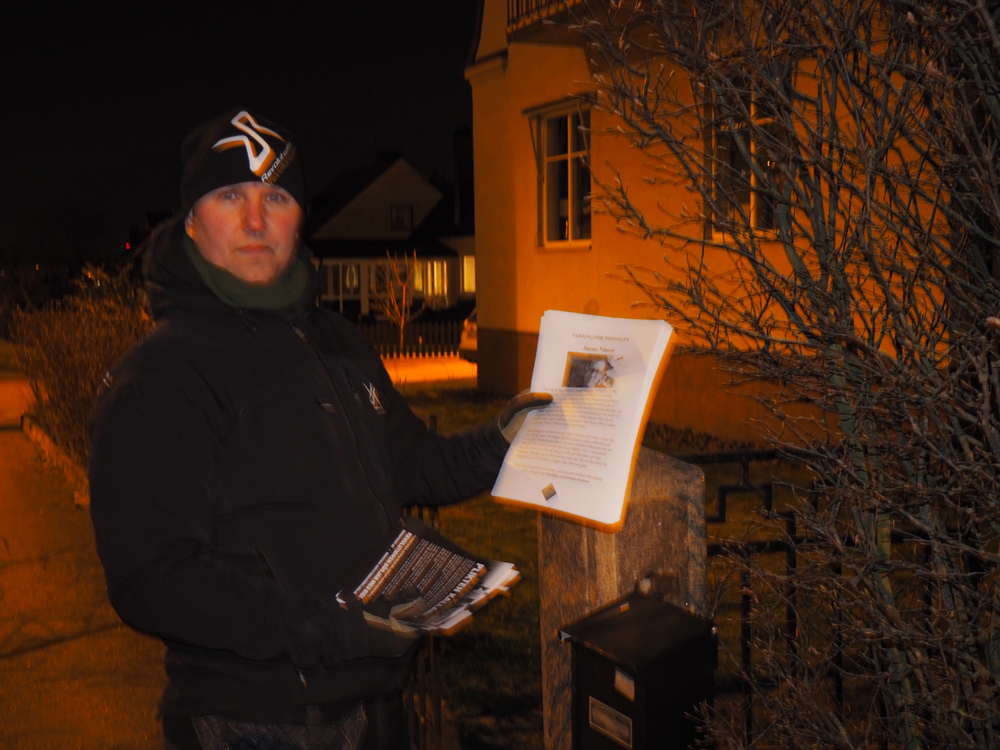 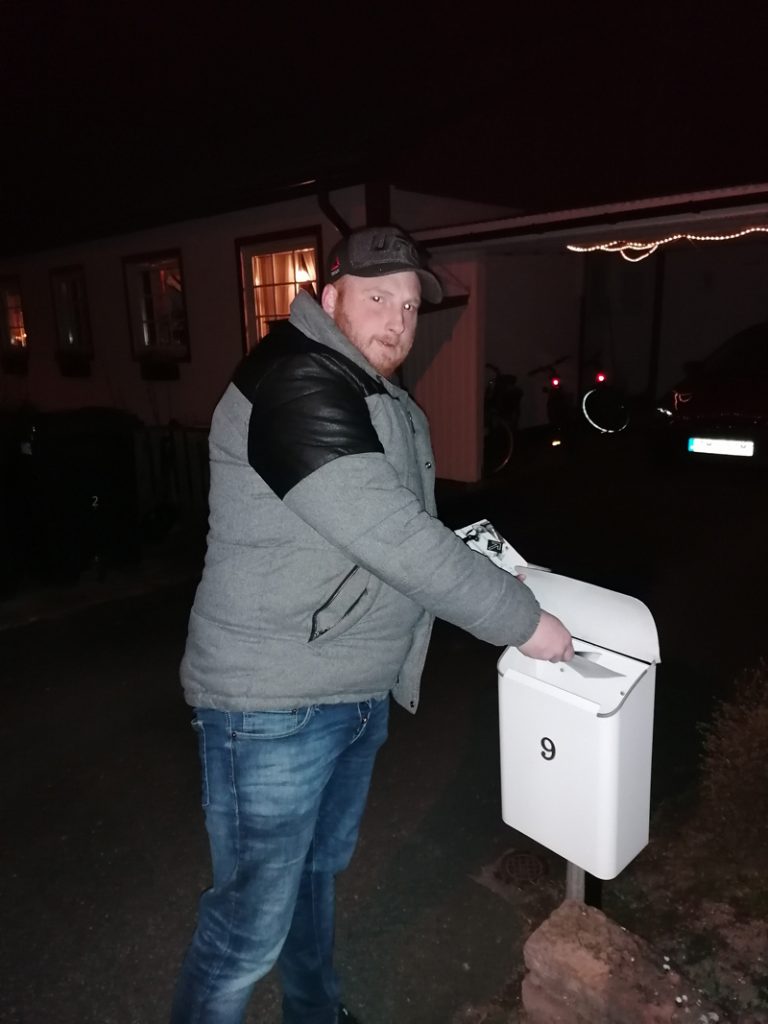 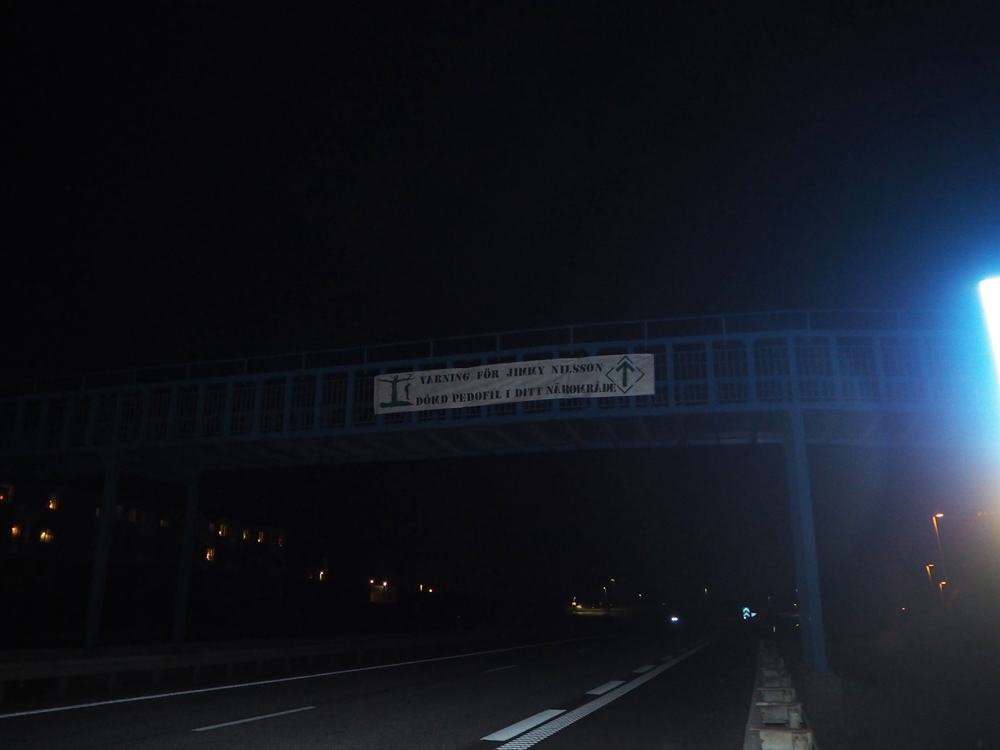 Most of the material was distributed in residential areas where lots of families live but also at schools and other places where there are children and youths who could be exposed to Jimmy Nilsson. Banners were put up at the major entrance roads to Kristianstad.

The original leaflet and an English translation can be read below: 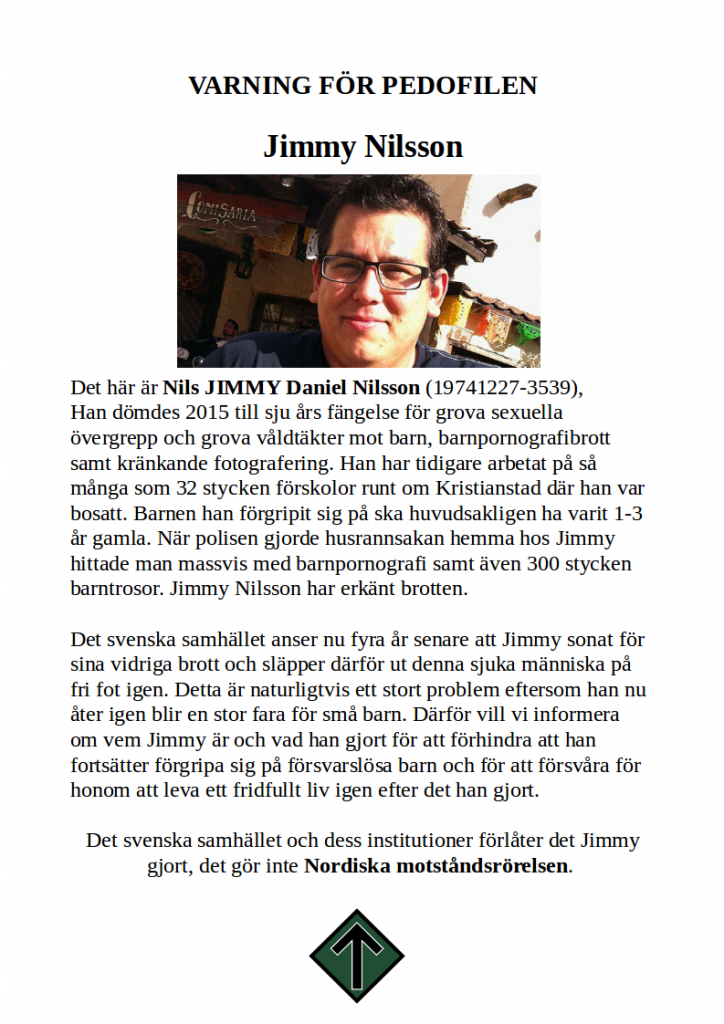 Beware of the Paedophile Jimmy Nilsson

This is Nils JIMMY Daniel Nilsson (19741227-3539). In 2015 he was sentenced to seven years’ imprisonment for aggravated sexual assaults and aggravated rape against children, child pornography offences and illicit photography. He has previously worked at as many as 32 nursery schools around Kristianstad, where he lived. The children he assaulted were mostly between the ages of one and three years old. When the police raided his home, they found large quantities of child pornography and 300 pairs of children’s underwear. Jimmy Nilsson has admitted the crimes.

Now, after four years, Swedish society believes Jimmy has atoned for his heinous crimes and has let this sick person go free. This is naturally a big problem as he will now be a great danger to young children again. We therefore want to inform people about who Jimmy is and what he has done in order to prevent him from continuing to assault defenceless children and to make it harder for him to live a peaceful life after his actions.

Swedish society and its institutions forgive what Jimmy has done. The Nordic Resistance Movement does not.

Simon Lindberg - May 31, 2019
0
NORDIC UNION. Here you can read about the Resistance Movement's vision of a united Nordic nation and what it stands for, as opposed to...