ACTIVISM. On Saturday the 7th of September, members and activists from Nest 5 took up the fight in Filipstad, where the municipal authorities openly declare they are “replacing the local population” with racial aliens. 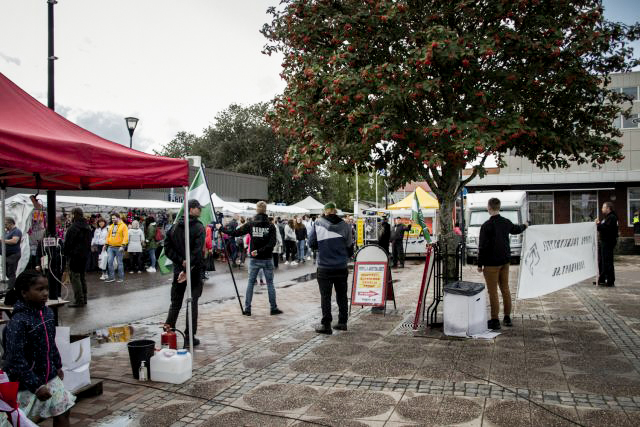 The crisis in the small picturesque town of Filipstad, Värmland, has now long been a dividing matter of discussion across the country. Thousands of racial aliens, wearing the mantle of “asylum seekers”, were forced on the city by orders of the central government during the mass invasion of 2015-2016.

The town was chosen by the perpetrators of mass immigration because of its local homogeneity on all levels and because at the time of the invasion there were unoccupied flats and other residences where the Asian and African masses could be housed, for free. This treacherous decision has brought the municipal authorities to a critical stage as the budget is drained by millions in order to sustain, feed, house, “educate”, hospitalize and entertain the idle Arab and Somalian “elites” who now compose 20%(!) of the town’s population, most of them men. Eighty percent of them are still unemployed as they also happen to be illiterate, and the available jobs require basic school skills.

One must take into account that the invasion of 2015-2016 was not the first one in Filipstad! The municipal authorities have been drained of resources for at least the past 10 years. The desperate situation that afflicted the unprepared and naïve inhabitants of Filipstad caught the attention of Swedish public television, which made an extensive documentary regarding the city. In this video, the municipality’s chief of integration, Jim Frölander, admitted openly, calmly and conscientiously that the authorities are actively replacing the population of the town:

“We are replacing the population. You can think what you want about it; it depends on your standpoint, but the fact is that this is exactly what we are doing, and we must relate to it.”

This blatant, audacious statement from a man who has long lost his moral compass and his racial consciousness enraged many of the inhabitants of the town and was met by members and activists from Nest 5, who held a public activity amidst the town’s famous autumn market. The streets were extremely busy and the comrades handed out leaflets near a banner with the message “Stop the replacement of our people” under the shadow of Tyr rune flags. 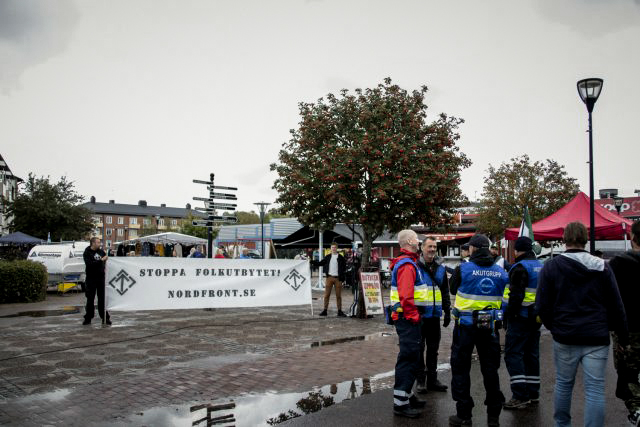 Many interesting discussions took place and the comrades engaged themselves enthusiastically and patiently in lively debates with both sympathizers and opponents. The author of the present article had a long discussion with a curious middle-aged Palestinian man who was very understanding of our goal to save the Swedish and white people from extinction, reclaim and defend our vital ground and fulfil our potential on all levels, despite the fact that it was clearly explained to him that in the future Nordic state he will be a subject of investigation for a repatriation process.

The Palestinian man was of course not happy as he, like a million others, is trying to secure a better life for himself and his family. He understood, however, how the Zionists operate and that our goal is a noble one, worth all the sacrifices, similar to the struggle of his people against the Zionist overpower. His understanding, however, was short and limited as he hastily returned to his individualistic perspective about the here and now. For the record, the man is married to a Swedish woman and has two racially mixed children, thus his sympathy for our cause is greatly overshadowed by the damage he and his wife have done to the natural order. 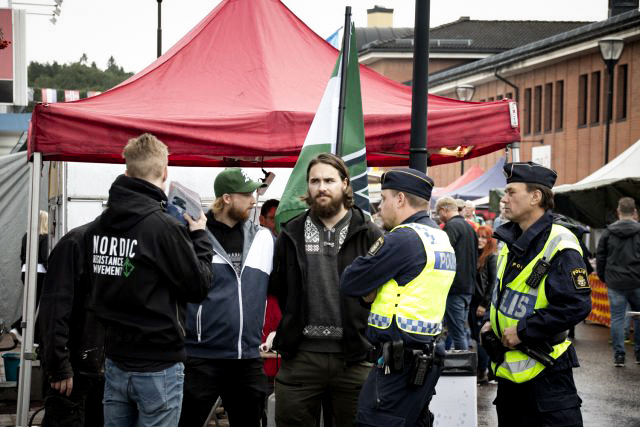 As soon as this discussion was over, the comrades witnessed a comic but disturbing phenomenon not seen before in little Filipstad. A gang of racial aliens, from 15-25 years old, composed of some scrawny Somalians, some arrogant and obviously drug-addicted Arabs, a couple of confused young Swedish girls and the local whigger in charge, approached the comrades in a threatening manner demanding they leave immediately and claiming that this is their ground.

An Arab among them threatened the comrades by asking them what they would do if the whole town came together against them, failing to look around and see the whole town was there and mostly had a positive attitude towards the Resistance men. The arrogance of these “immigrant” gangs is the result of a long tradition of passivity from the local population, an uncanny fear that these cowards may actually attack or, of course, of their reaction being characterised as racist. The men and women of the Resistance Movement have no such weaknesses, however, and stood their ground firmly during the few seconds that it took the “youngsters” to realize that we never give ground or stand down. The gang retreated back to the gutters it came from. 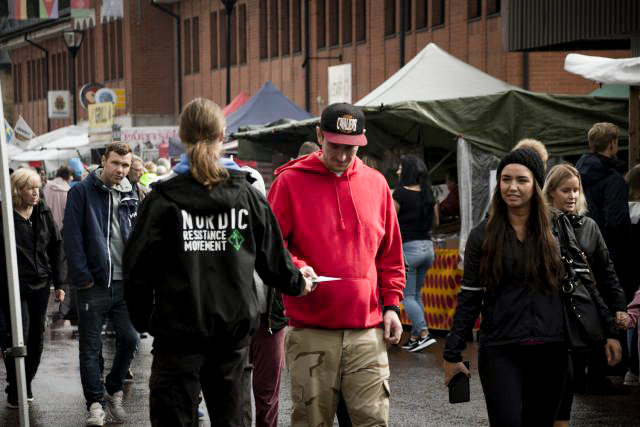 After a few hours of important activism, the comrades paraded through parts of the city with the flags high until the gathering point where the activity was officially over. 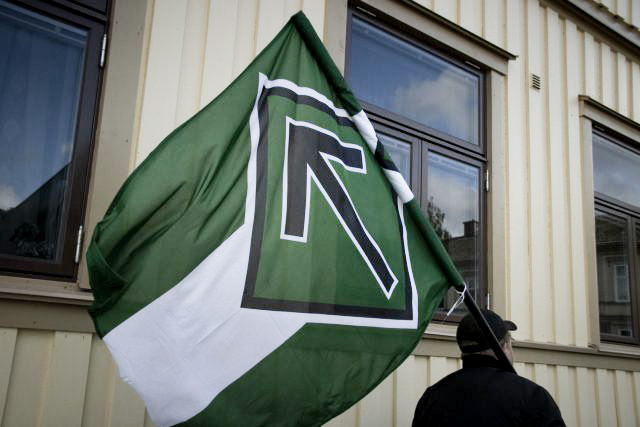