NORDIC VOICE. The Nordic Resistance Movement presents its second international radio show, an activist podcast with hosts from all the Nordic countries. 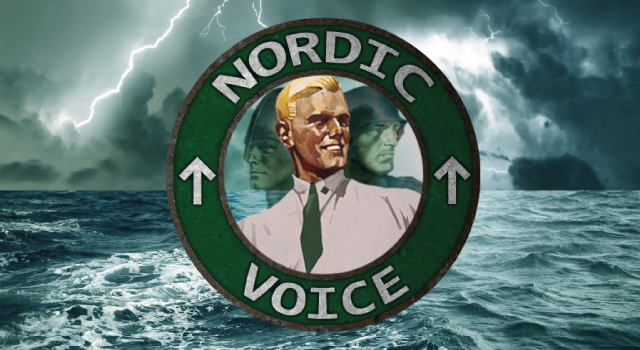 The Nordic Council has worked behind the scenes in co-operation with Nordic Radio to produce a pan-Nordic, international podcast focused on activism. The result of this effort is “Nordic Voice”.

Nordic Voice is the first podcast featuring members from all the Nordic countries and is also the first to include a member from Iceland. The main host of the podcast is Max, who is joined by the following contributors:

Sweden: Julius. Activist in Nest 1 and speaker for the Nordic Resistance Movement. Known from Nordfront TV and also a frequent guest on the Swedish activist podcast “More Than Words”.

Norway: Andreas. Activist from Nest 1 and radio host on the Norwegian podcast “The Frontline”.

Finland: Onni. Activist from the eastern parts of Finland.*

Iceland: Frank. From the big island to the west.

The aim of the podcast is to inform the world of what is happening on the streets of the Nordic nation and to inspire others to action and revolutionary struggle. The podcast also serves to update our own members on what is going on in the Nordic region.

With the launch of this podcast, our other English-speaking radio show, Nordic Frontier, will focus somewhat less on activism and more on news and politics from the Nordics. At times the podcasts might discuss the same piece of news, but Nordic Voice will talk about it from an activist’s perspective, similar to the relationship between our Swedish versions, Radio Nordfront and More Than Words.

It is intended that Nordic Voice will be broadcast once a week in future, but initially it will be published bi-weekly and we will announce further details when the schedule is set. The show will be published here on Nordicresistancemovement.org and on our Swedish radio site Nordiskradio.se.

* Since the show was recorded, the Nordic Resistance Movement has been temporarily banned in Finland. In the future Onni will participate as an independent National Socialist activist.