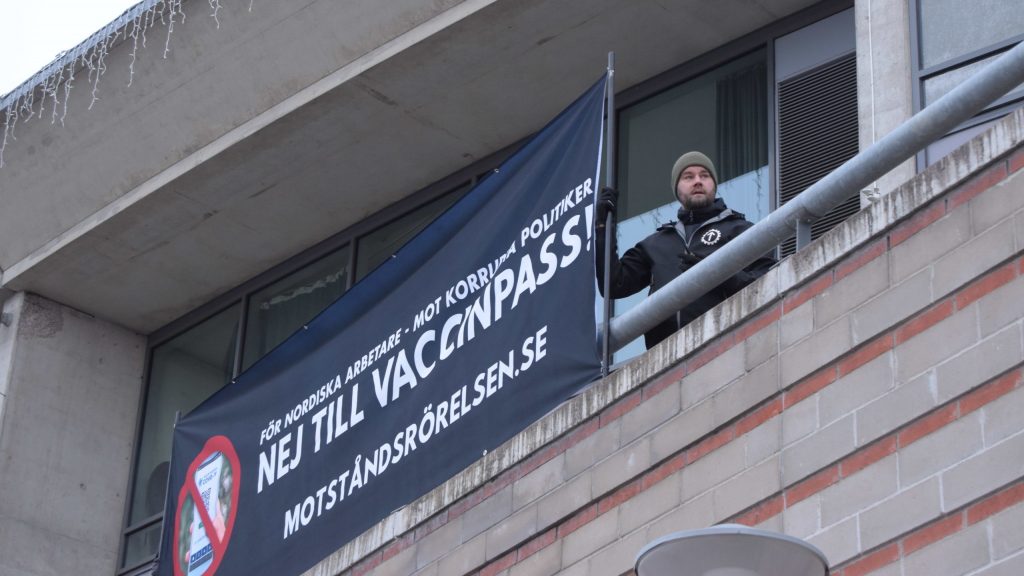 A few months ago, Nest 5 visited Hedemora for a regular public activity to highlight the importance of exercising the right to self-defence. The activity was widely discussed on social media and also received attention in the mainstream media. 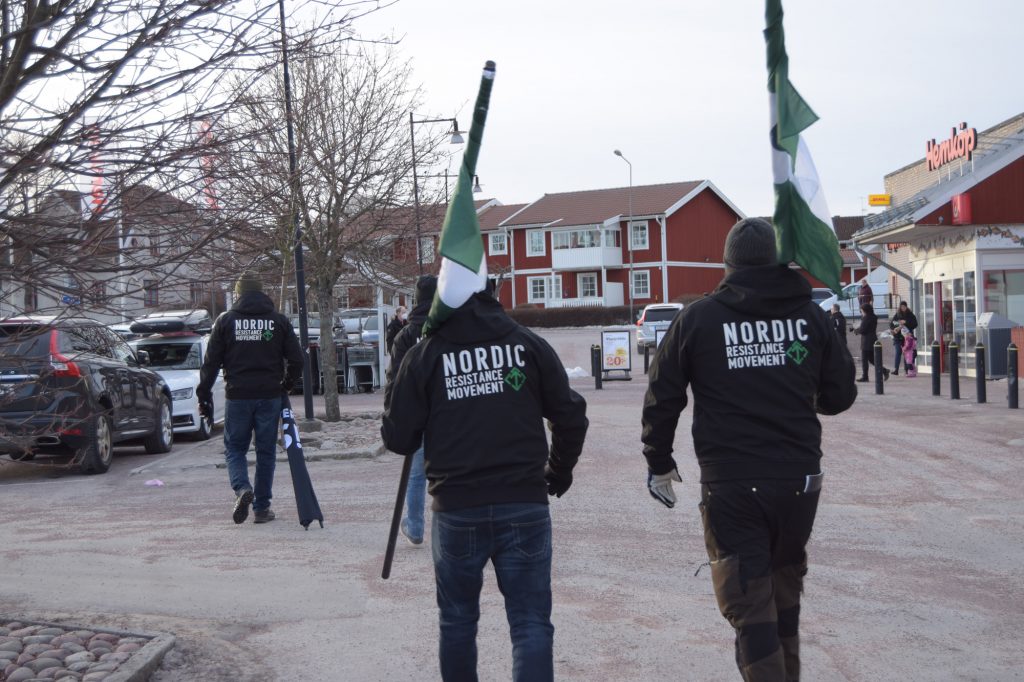 Hedemora was therefore an obvious choice for another activity in the Nest. It’s a town we have not visited as much as places like Ludvika or Avesta, but it seems just as suited for creating interesting and rewarding conversations with people on the streets.

Right now, the main issue of concern in Sweden is vaccine passports. This subject has been covered extensively on both our English- and Nordic-language websites, including in Simon Lindberg’s article No to vaccine passports for Covid-19!, a photo report from an anti-vaccine passport demonstration in Gothenburg, and episode 80 of the organisation’s Swedish ideological podcast Ledarperspektiv. 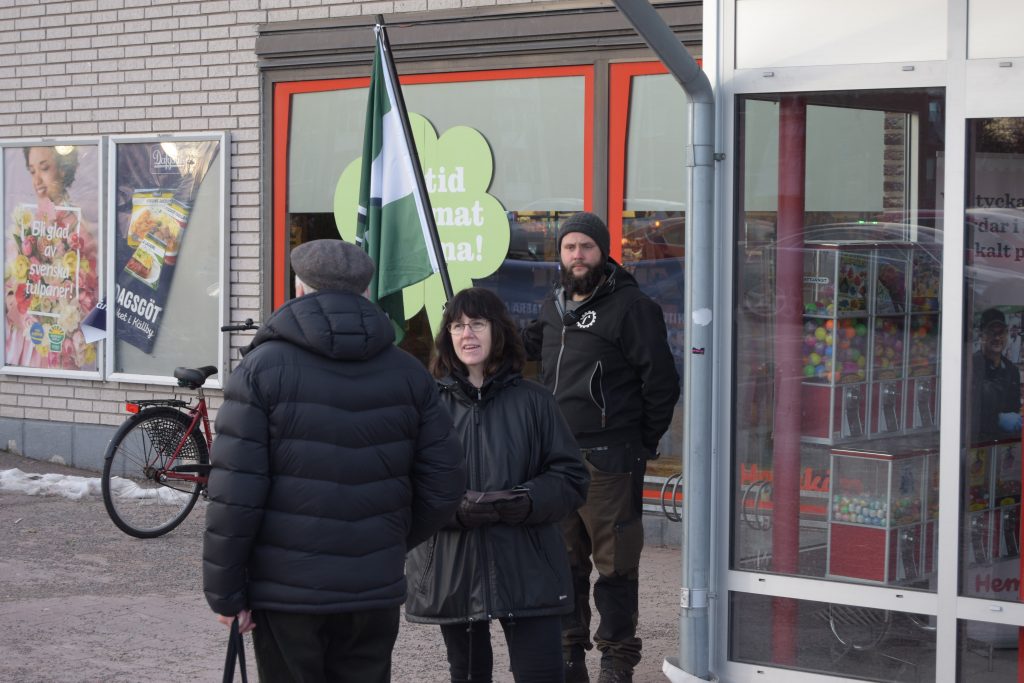 Of particular importance to us in Nest 5 is Dalarna County Council’s demand for healthcare employees to be vaccinated in order to keep their jobs. Dalarna is the only regional council so far in Sweden to make this demand, and it is our responsibility to show resistance against it.

The day began like all days in service of the struggle: with a joint car ride with comrades, this time on the way to Hedemora. As if to set the tone for the day, the P4 Dalarna radio station announced during the trip that – so far – no one has been fired due to the vaccination requirement from Dalarna County Council.

Upon arrival in Hedemora, a new banner was unfurled with the message “NO TO VACCINE PASSPORTS – For Nordic workers. Against corrupt politicians”. Leaflets were handed out while the banner was displayed and conversations were held with passers-by at the Hemköp grocery store. A lot of sympathy was expressed for the message, but – as is usually the case at activities – most people just got on with their day without interacting with us. However, they were at least made aware that some of us dare to stand up publicly and oppose the vaccine passports in a society that is becoming totally spineless. 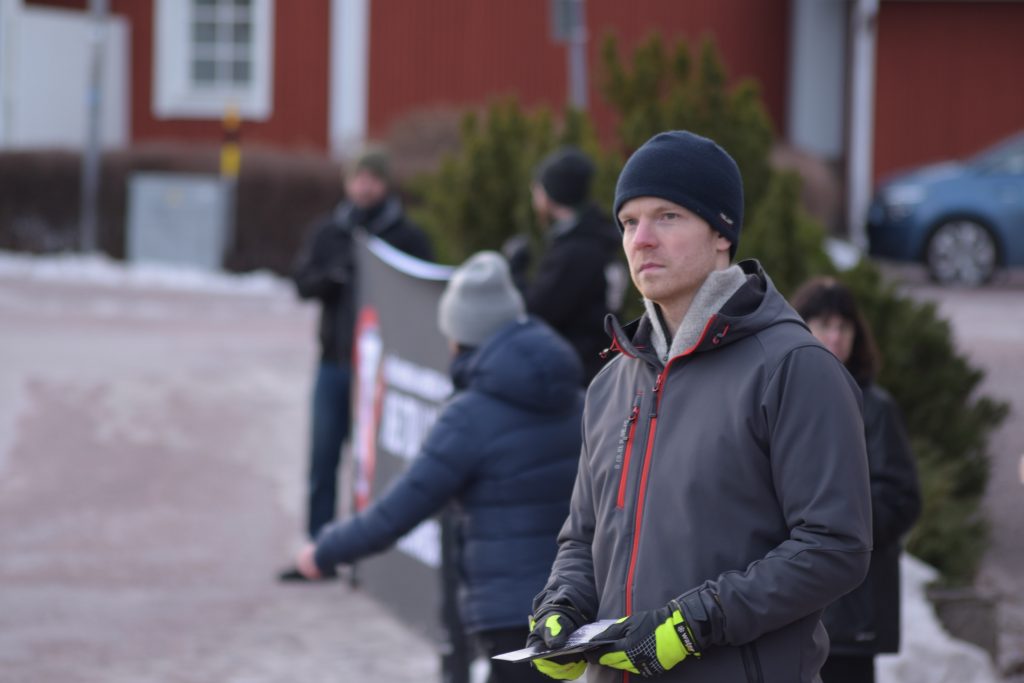 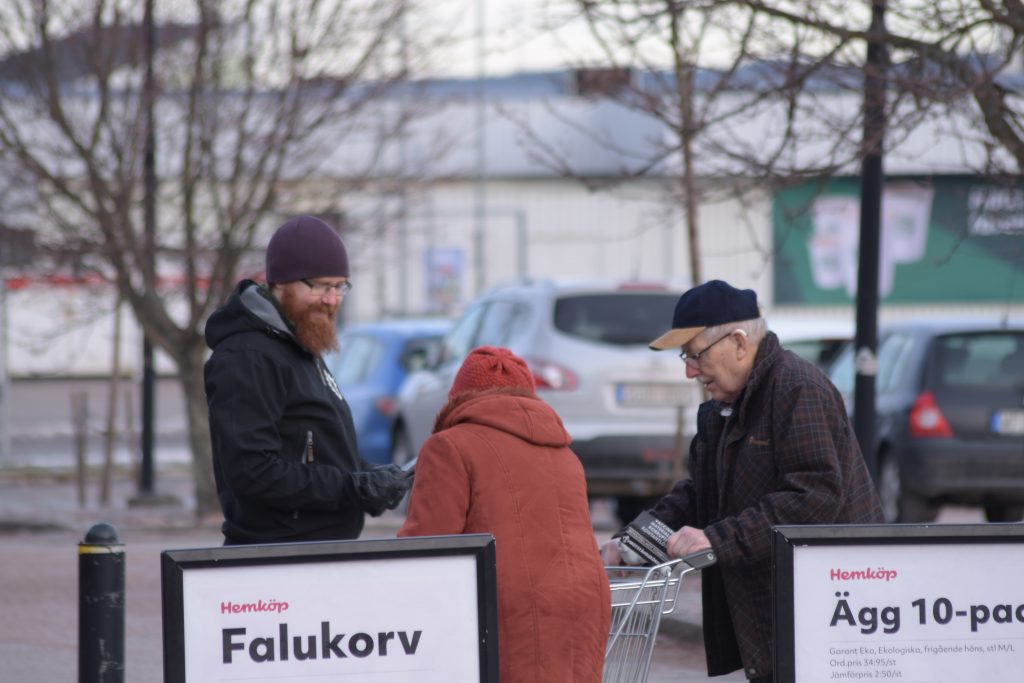 The participants were enthused by the activism and decided to make the activity even more effective by visiting another location, rather than focusing on just one area. Many of the activists were due to head through Borlänge on their way home, so after an hour or so in Hedemora, they went to Borlänge to continue the activity there.

In Borlänge, visitors to the Kupolen shopping centre were able to see the banner and have discussions with our activists. 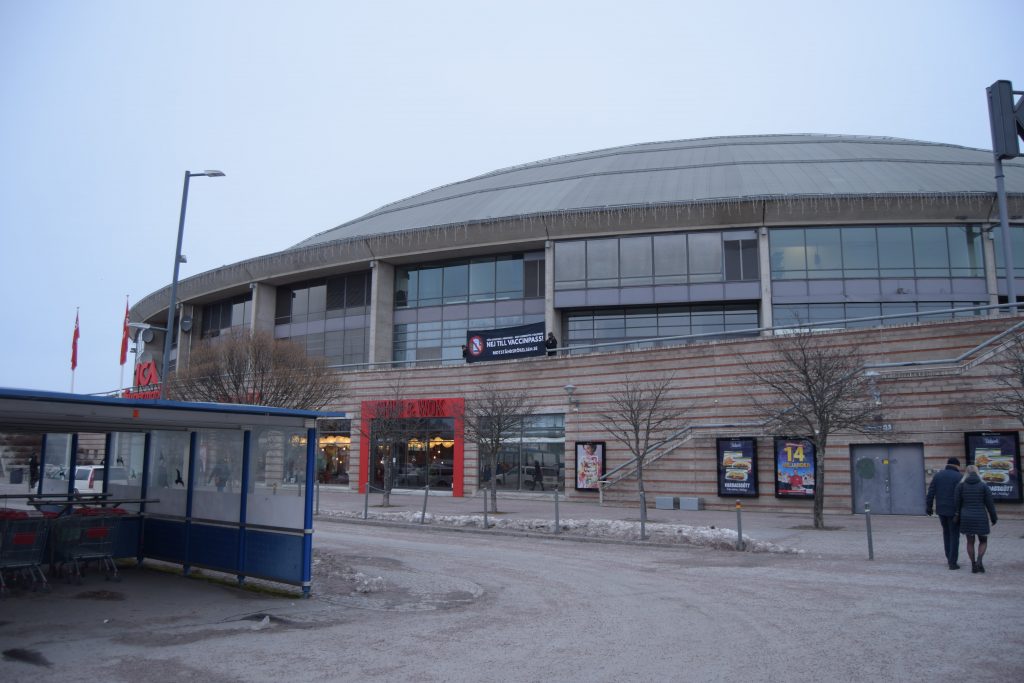 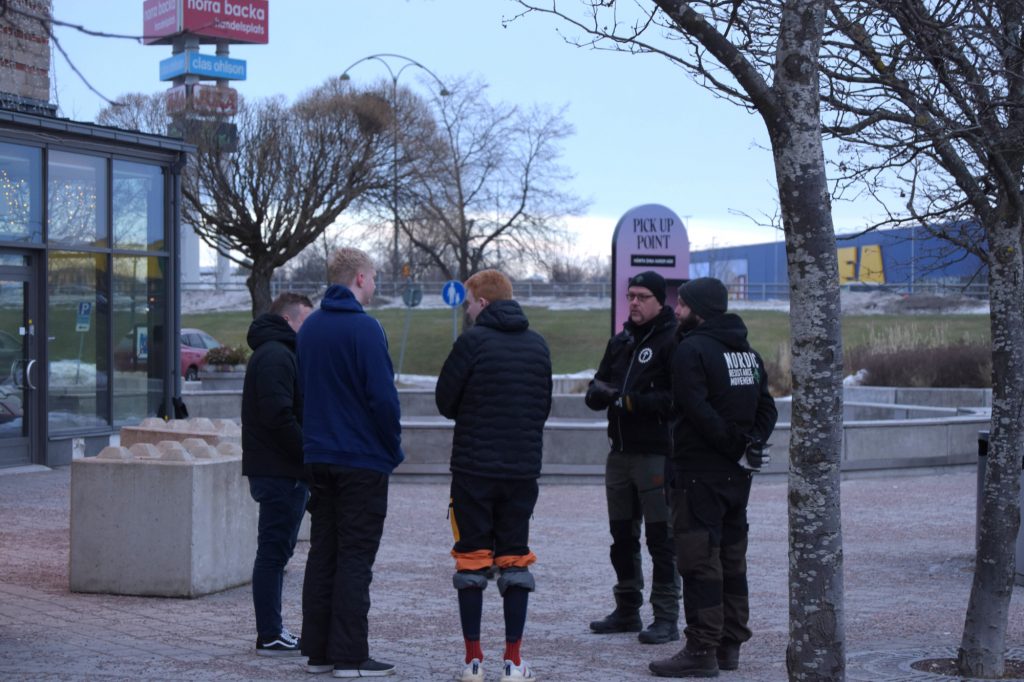 Some passers-by asked why the Nordic Resistance Movement is concerned about this issue when we normally focus on other topics, like the media’s power over democracy, mass immigration and Jewish influence in Western politics.

This is how Pär Sjögren, Chief of Nest 5, answers the question Why are you against vaccine passports?

The way we see it, it adversely affects the rights of workers. There are already several municipalities and regions that want to fire people who do not present a valid vaccine passport, and such demands are unreasonable – especially for a vaccine that barely works. Politicians should make balanced decisions on proper grounds, not decisions based on how much pressure the lying media or other shady figures exert on them – something that has happened a lot during this so-called corona pandemic.

We also see how other countries are pressuring their populations with demands for various types of vaccine passports. By this point, it should be apparent to most people that the whole corona narrative has a completely different purpose than attempting to stop a virus.

In some countries, they are even talking about forced vaccinations against Covid. It is important to show that we stand on the side of public health and the workers in this regard.

Kupolen proved to be a very good location for a public activity. When the day was drawing to a close, a few activists also took the opportunity to leaflet some car windscreens in the large car park.

Surprisingly, the police did not visit the activities in either Borlänge or Hedemora. Maybe they have learned that places are actually safer when we are there then when we’re not – much to the disappointment of the political commissars who call them to report our presence.

Overall, the two activities were very productive and gave us a great opportunity to talk with people and reach out with a highly relevant message. 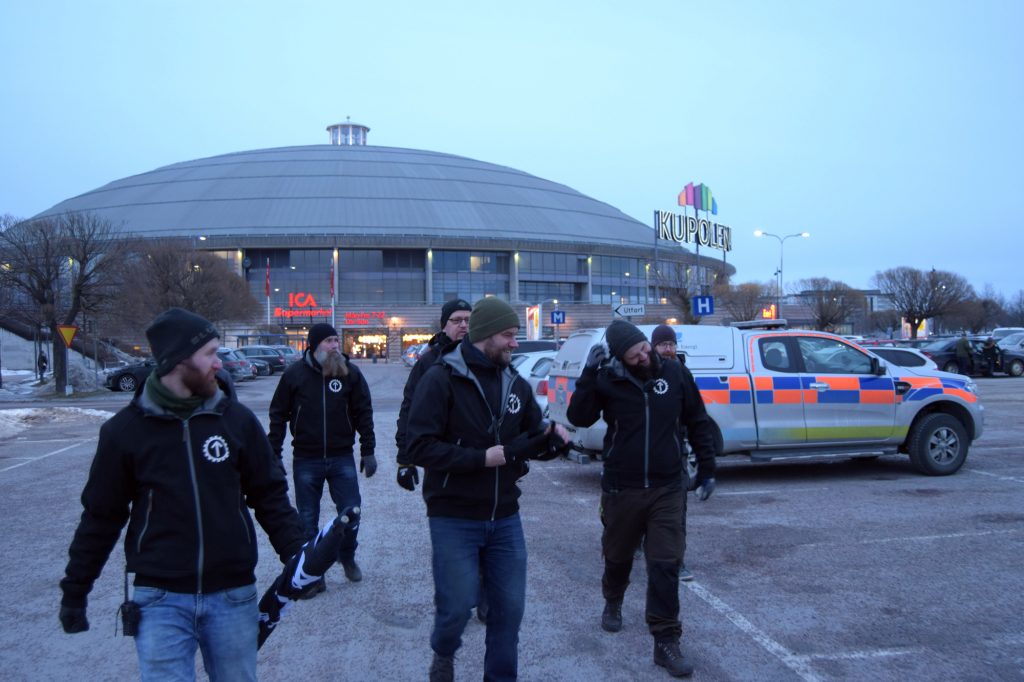