During the weekend, the Nordic Resistance Movement entered the Danish capital of Copenhagen with more than 80 activists to hold the largest National Socialist gathering in the city since the Second World War.

What was about to unfold on Saturday was an unannounced manifestation planned by the Danish branch of the Resistance Movement and supported by activists from Sweden and Norway.

The blitz activism was unleashed when the more than 80 man strong group of activists got off the train in the city centre around 1 p.m. and marched with flags held high towards Kultorvet, a central square in Copenhagen.

Passers-by stopped what they were doing to observe and take pictures as the march moved past many historical buildings before the first police officers showed up.

When they arrived on the busy square, the activists were met by a couple of police officers who were told that the Nordic Resistance Movement was present to hand out leaflets to the people. The police wanted to know if the activists had come to demonstrate, and were informed that was not the case. 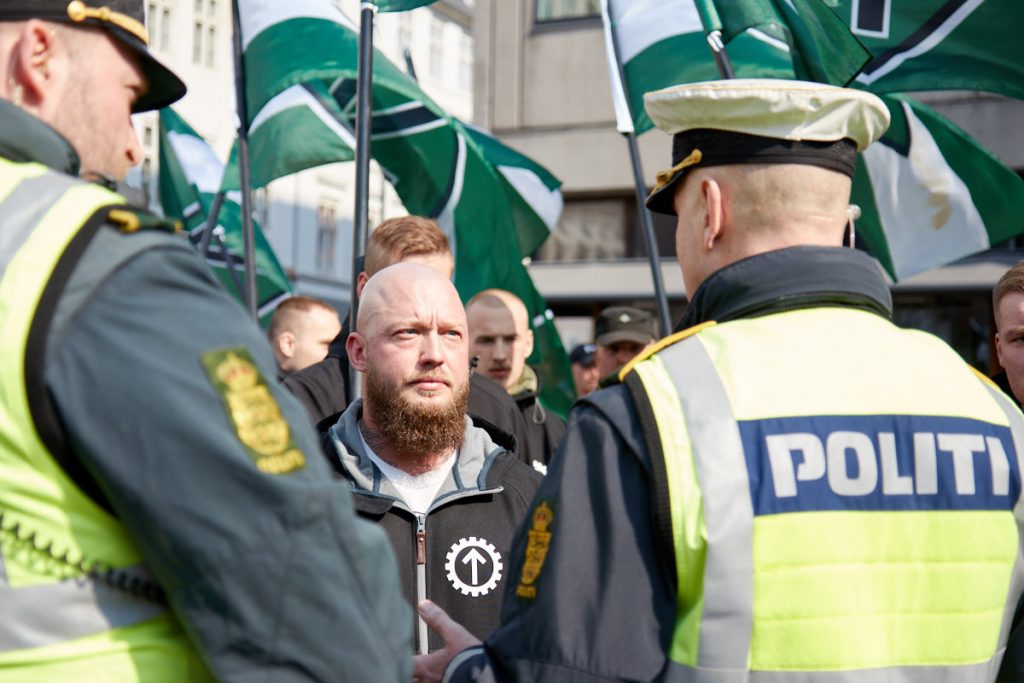 A dialogue was initiated between the activist in charge of the operation and the police, who demanded that the group of 80 activists designate themselves to a small confined area of the square behind police tape for the duration of the activity.

Naturally the Nordic Resistance Movement would not accept such demands and the speaker for the event immediately began his speech, using a megaphone. The police tried to stop the speaker from giving his speech, but a group of activists quickly formed a ring around the speaker, protecting him from the police. 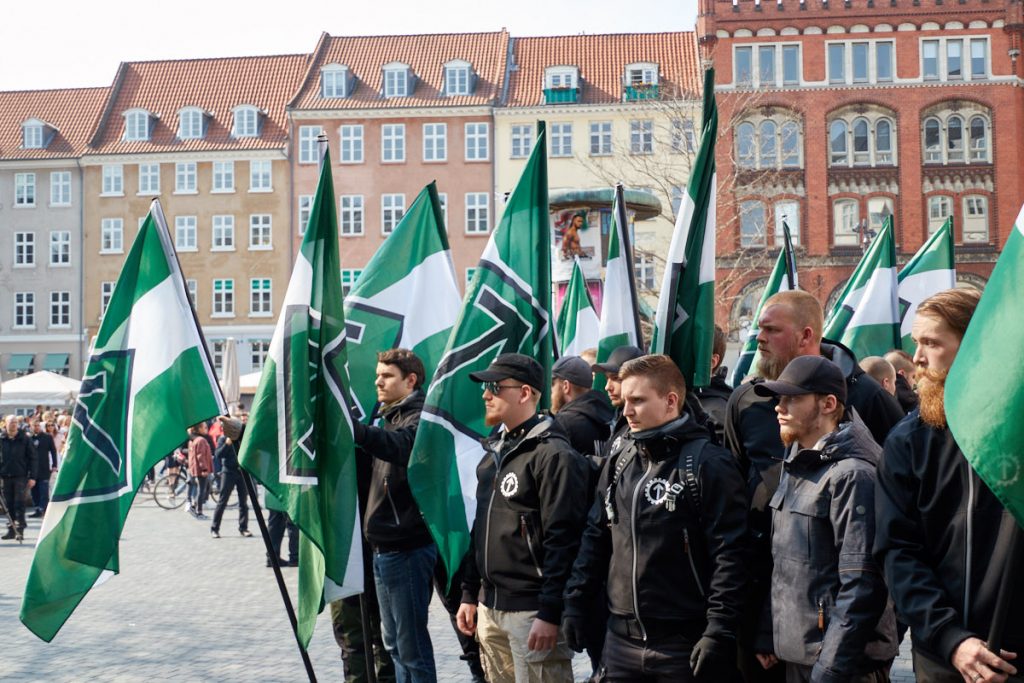 For the next ten minutes, the hundreds of people on the square were able to hear a speech about Nordic values, such as honor, morals and bravery – in sharp contrast to the customary mentality of surrender that governs most people today – the result of hostile institutions and corrupt politicians who love to see the people as disarmed, demoralized consumers. 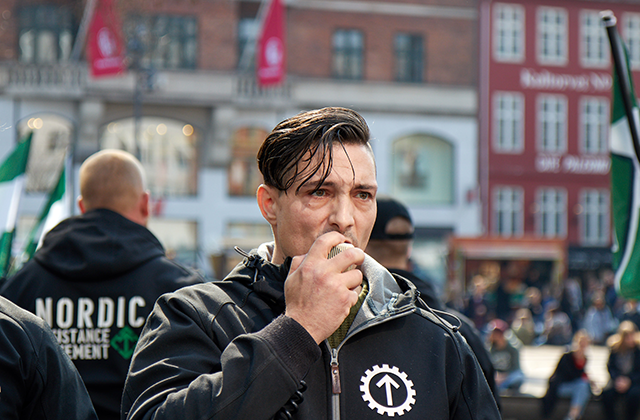 Except from the speech:

The Nordic Resistance Movement consists of people who wish to see a society and a folk that strives for a higher ideal and reject the lowest common denominator, which is imposed on the people by the media and hostile institutions.

The Resistance Movement is fighting for a reawakening of the old Nordic values in the modern Nordic folk. A folk today characterized by decay, self-loathing, guilt and a lack of morals and honor. A folk led astray by an entertainment industry and a Cultural Marxist education system that has taught us to look to other peoples’ cultures in fascination and admiration while our own Nordic culture is being ignored and in some cases even actively erased and destroyed.

Concepts such as strength and honor, morality, loyalty and bravery are natural to the Nordic folk.

It is not brave to quietly let a hostile government hand over our Nordic lands and riches to a foreign folk.

It is not loyalty to your folk and our ancestors’ blood and hard work to mix and marry with people from another race, as this would mean that the bloodlines which your ancestors fought and died for will disappear, never to come back.

And it isn’t honorable or a sign of great morality to allow homosexual parades arranged by pedophiles in the public space for children to see and be affected by.

Gender-confusion, homosexuality, feminism, the hypnotising but misinterpreted concepts such as diversity, equality and liberalism. These are the signs of a people subjected to deliberate dumbing down and deception who are being led away from their true identity towards decay and ultimate doom.

When the higher ideals of a people get destroyed and forgotten, only the one common denominator remains. They are just spectators and consumers.

From this common denominator, where everyone is equal regardless of competence, the masses become slaves of the ones who are deliberately pushing towards more consumption, more capitalism, more bland politicians, more decadence, more political parties causing even more fractioning of the folk, more dumbing down, more, more, more of all that which makes the proud, honorable and brave Nord into a slave of a system that is made to fail! 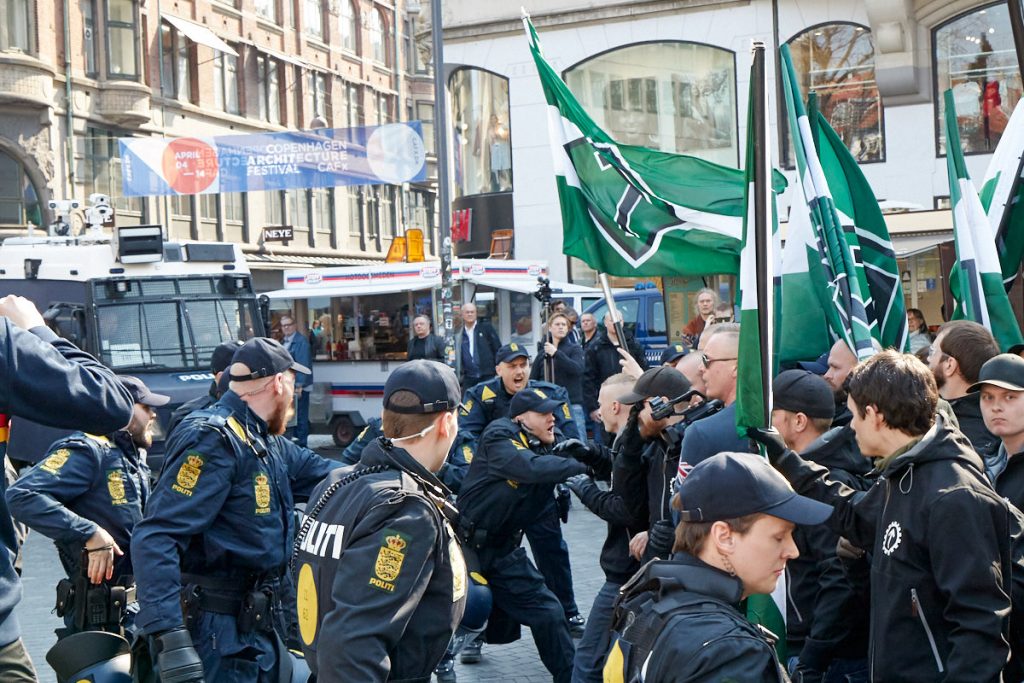 After leaving Kultorvet the march headed back toward the train station. The police spared no expense, with riot police and vehicles continuing to follow the march. An estimated 200 riot cops were on scene to stalk the 80 activists. 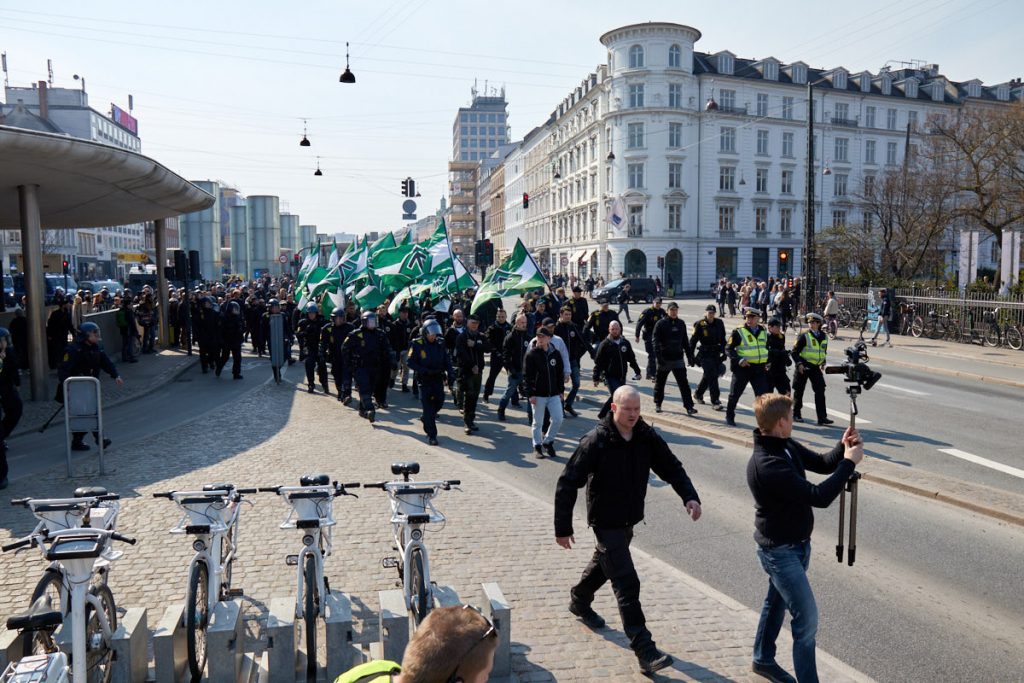 The march was now surrounded by the police, who decided to stop all traffic and let parts of central Copenhagen come to a grinding halt as they followed the activists through the city.

At a checkpoint every activist had to go through a frisk search before the march continued. The search did not lead to any illegal findings and can only be viewed as another waste of time and police resources.

The manifestation in Copenhagen was a huge success. The red anti-fascists, who had previously been a strong force in Copenhagen, had not been able to mobilize more than a handful of screaming, singing and sad-looking counter protesters who did not dare get closer than 50 meters of the marching activists.

From the streets of Copenhagen
1 of 128

The Danish police learned that the activists in the Nordic Resistance Movement stand together, are disciplined and act as one unit.

The Danish people learned that the Nordic Resistance Movement as a pan-Nordic organization is capable of marching through Copenhagen and in a successful and powerful fashion speak to the people in an attempt to lift the veil from their eyes.

A video of the journey back to the cars, a train ride with riot police and police vans following the train with lights flashing: