RESISTANCE MOVEMENT. On 3 October I was in Germany, along with several comrades from the organization, to participate in a demonstration arranged by Der Dritte Weg in Berlin. Here’s a report from the trip. 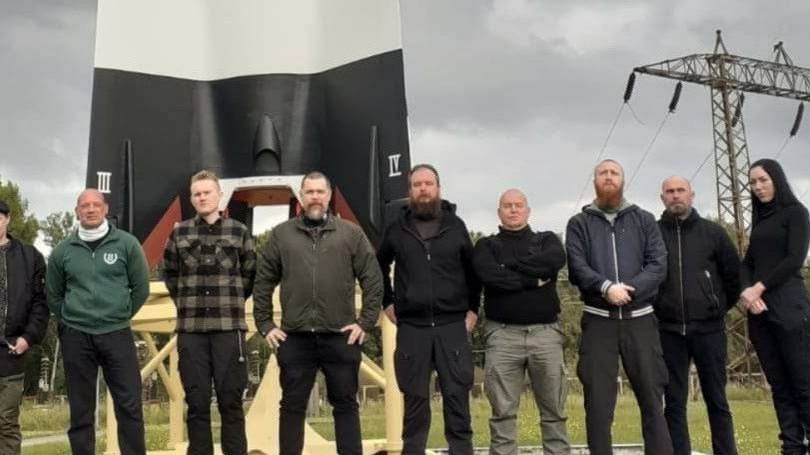 On Wednesday evening, a group of members and activists from Nest 2 set off toward Das Vaterland. We had decided to start our trip a few days early so we could visit various parts of Germany, but chiefly so we could spend time with our comrades down there. The first stage of the journey consisted of a boat trip lasting for a little over 12 hours.

Because we left in the evening, I expected there to be a lot of partying on the boat, with inebriated guests singing karaoke until my ears bled. But instead our group ended up occupying several rooms where generally the only ones drinking – and in very moderate amounts – was us. The few people we saw on the “ghost boat” wore corona masks (unlike us), and some looked frightened when we encountered them in the elevator and in other close quarters. The fact that Germany has a very different attitude to the coronavirus was extremely palpable throughout the entire trip.

The positive thing about the lack of loud music and social interaction with others was that we got to spend a lot of time together, which was good for me personally. Often when I meet comrades in more social contexts (e.g., Nordic Days), it’s common for me to group myself with people with whom I’m in regular contact. For example, leading people, radio people or people from the Nordfront staff. That’s obviously not the way it should be, but there’s always some mini-meeting that has to take place, even at dinners and similar events. Apart from that, I’m a man who doesn’t spend all that much time socializing with people privately. That time is spent with my family. Here I found the time to really get to know the activists and members from the Nest, which wasn’t just pleasant but also useful – hopefully for them too. Just this little aspect made the trip worthwhile.

Our first day in Germany

We arrived on Thursday morning and decided to take a car trip down to Lübeck and eat lunch there. From what we saw, Lübeck was surprisingly white in comparison to other large or medium-sized cities in Germany, whose demographic problems are at least as bad as Sweden’s. Unfortunately, we were unable to find a typical German restaurant and had to choose a Greek one due to lack of time. One positive thing about Germany is that there are fewer McDonalds restaurants than in Sweden, but on the negative side, there are more kebab shops.

After Lübeck we went to the location outside Berlin where we would spend the next few days. We were very well received by comrades from Der Dritte Weg, and we finally had a chance to eat traditional German food, which they had prepared for us. We had Bavarian schweinebraten (pork steaks), different kinds of sausage, fried potatoes, noodle salad, pretzels, different bread rolls and home-made juice. The culinary culture of Germany is rather different from the Swedish one. Swedish food is quite beef-orientated, while German cuisine is based on pork, and this is something they’ve perfected. Highly recommended!

The remainder of Thursday evening was spent discussing the upcoming demonstration and talking about our respective organizations so we could learn from each other. As I have previously remarked on both Radio Nordfront and Leadership Perspective, Der Dritte Weg shares our attitude to the struggle, but there are differences in methods, and we can learn from each other in these areas.

On Friday we indulged in a bit of sightseeing. We had planned on visiting sites like Teutoburg Forest, Externsteine and one of the offices of Der Dritte Weg in Siegen. But since we obviously had problems reading maps, we soon realized the journey would take too long. We discussed whether we should go somewhere in Berlin, but agreed that it was just like any other metropolis (i.e., a degenerate big city), as opposed to somewhere like Munich – which I have visited before in connection with Der Dritte Weg – with all its magnificent architectural wonders. Conversely, practically everything worth seeing in Berlin was bombed to smithereens during the war and later replaced by concrete, soulless buildings.

Instead we visited Peenemünde, where we killed two birds with one stone. Peenemünde is perhaps most known for being the secret location at which the V2 rocket was manufactured under the leadership of Wernher von Braun. The Vergeltungswaffe 2, meaning “weapon of retribution”, was designed to retaliate against the terror bombings committed by the Allies against German civilians. 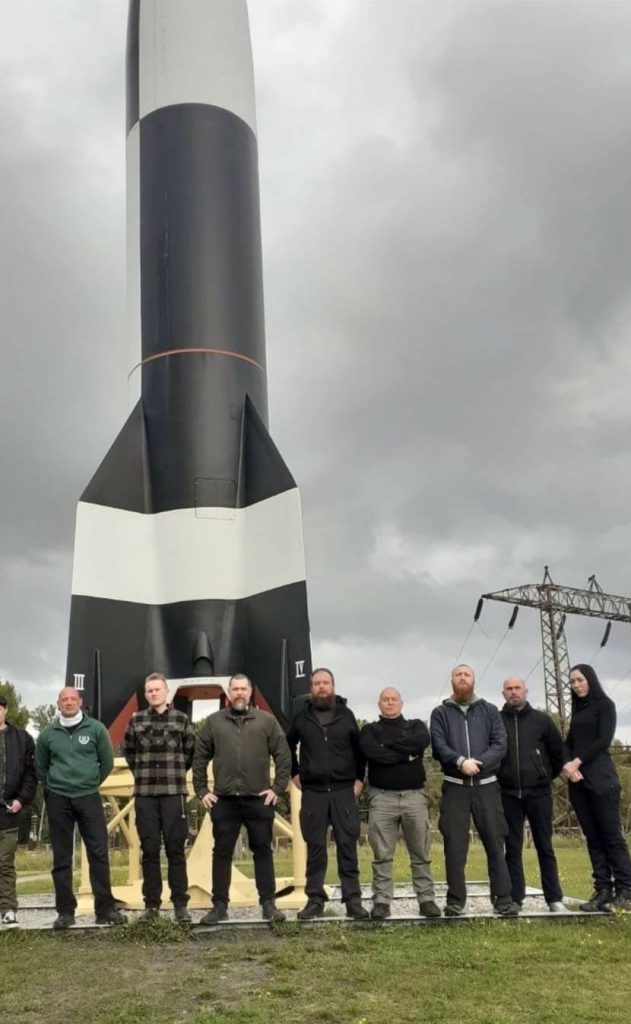 Right after our visit to the rocket manufacturing facility, we went to the spot where Gustav II Adolf and his troops made landfall during the Thirty Years’ War. We Swedes and the German accompanying us came to the conclusion that the entire war should be viewed in retrospect as an idiotic brothers’ war. However, the war also led to developments in modern warfare techniques and showed that a lion from the North was capable of ruling half of Europe, which we Swedes can be proud of.

On Saturday it was finally time for the demonstration in Berlin. We got up early and arrived ahead of time at the gathering place. We were quite a small congregation at first, but many more soon showed up, including a lot more Swedes and fellow Nords who had set off from different locations. It was the first demonstration held by Der Dritte Weg in Berlin and thus somewhat of an “experiment” according to one of the representatives we spoke to.

The organizers were expecting Antifa to gather in force from all over Germany, which proved to be correct. Some larger Antifa groups walked past the spot where we were standing, where the police had set up riot fences. Since our group got there early, there were only around ten of us, while there were several hundred of them.

Something similar happened here to an incident at our 1 May demonstration in Falun, where Antifa rattled a fence so much that it tipped over, only to put the fence back in its place and continue rattling it. Initially, the lack of police officers in Berlin meant there was a large gap in their ranks that would have allowed loads of anarchists to jump over the low fence and make short work of their opponents – if only they had the courage to do so. Instead they just rattled the fence, which gained the police’s attention and rendered an attack impossible. You got the distinct impression that you get the same sort of Antifa in Germany as you do in Sweden, even though the former have a “better” reputation.

I have now attended a number of demonstrations held by Der Dritte Weg, and I can say that they differ a little from how we do it in Sweden, as the speeches are held before, during and after the demonstration itself. This means they can stop the march in order to hold a speech, only to march on afterwards and hold a new speech. I think this is an exciting innovation that gives you the feeling that a little bit of “action” is always going on. When I held my speech, we were in the vicinity of huge apartment blocks with hundreds of spectators looking out of their windows. This no doubt ensured that my message got out to more “ordinary people” than it would have done had I held a speech in a cordoned-off town square.

In my speech, I wanted to talk about the spectacular history of the German people and convey the message that their strength still resides in their blood, ready to be awakened once again. I spoke about Der Dritte Weg as a new force that has personally given me hope in the German movement, and I also spoke about unity among struggle-based organizations in Europe.

Excerpt from the German section of Fredrik’s speech in Berlin:

The march continued after my speech. Antifa tried throwing rocks and pieces of glass, but they were driven away on several occasions by functionaries from Der Dritte Weg. The march went on and was concluded at the same spot it had begun, with more speeches.

In my opinion, Der Dritte Weg pulled off their “experiment” brilliantly. The lines were disciplined, new directives were continually communicated, and new solutions were found when the police wanted to cooperate with Antifa and their blockades. Above all I appreciated the speeches – everything was top notch throughout!

We got back late on Saturday evening, but we still had time for some more socialising and ideological discussions before we had to go to bed and get up early the next day. On Sunday morning we said goodbye to our comrades and made our way to Kiel for the final trip home. I brought back gifts from our German comrades, as well as good memories.

I want to take this opportunity to thank my Swedish and German comrades who made this trip very pleasant for me. Hopefully we will see each other again under similar circumstances.