WILDERNESS ACTIVITY. Members and activists from Sweden’s Nest 1 went to the forests of Stockholm County for the first in a series of outdoor activities specifically focused on survival last month.

As this was the first outing, the bar was set quite low so that even completely inexperienced participants could attend and have the chance to learn the basics.

The day began early, south of Stockholm, with all the participants meeting at a car park for a quick rundown of what could be expected from the weekend. The first task of the trip was for all the attendees to unpack their backpacks and lay the contents neatly and tidily on the ground. This was so the Nest Chief could see what everyone had brought with them and ask the participants why they had brought the items in question and what they thought was the most important thing to have with them.

Those who didn’t think water was the most important had to leave it behind, which meant the others had to share their water with them, giving everyone less to sustain themselves on the journey.

When a selection of things had been removed, either because the object in question was already plentiful in other comrades’ backpacks, or because it was simply not important for the season and weather, everyone had to unpack their equipment again. This time they had to think specifically about where everything should be placed in the backpack in order to facilitate access to more necessary items, opposed to those that would only be needed after making camp. 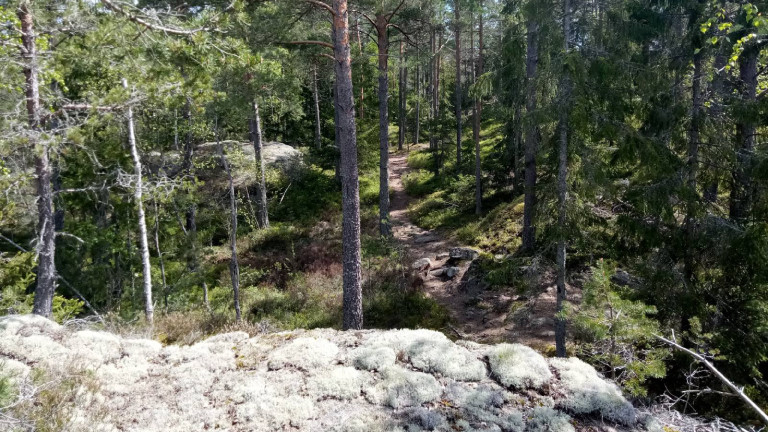 The hike started at the far end of the Sörmland trail. According to the weather forecast, rain was expected throughout much of the day, yet no clouds were visible when setting off. The first part of the hike took the group through forests and marshes. Everyone exhibited a positive attitude and discussed anything and everything as they went.

After an hour and a half, the promised rain finally came, with Thor making himself known in the distance via the sound of roaring thunderclaps. However, the rain didn’t last long and receded after just half an hour..

Two and a half hours after departure, the group reached the planned endpoint and began looking for a suitable place to set up camp. They soon found an appropriate spot next to a lake, with some bare ground and plenty of trees to fasten the tarpaulin they had brought with them.

After a short lunch break, work began in preparation for the trials of the weekend. Firewood was collected and sawn, fireplaces were constructed, tarpaulins and hammocks were set up between the trees, and various edible plants were sought out.

Next, the first training exercise of the weekend began, which focused on first aid. A member spoke about the importance of always having a first aid kit with you when you go out into the woods, and what a kit should contain. Many different types of potential injuries were discussed, as well as how to treat them – everything from cuts, severed limbs, burns and hypothermia. Some treatments were also practised in front of the participants.

The group then quickly moved on to the next subject: making a fire. The comrade who gave the training explained two very important things to keep in mind when going out into the woods: Always keep your fire-lighting instrument dry and close to your body, and always carry a fire-starting material with you, such as birch bark.

Many different materials for fire-lighting were reviewed and tested – including ones that can be found in nature and ones that can be brought from home (for those wanting to play it safe). The importance of constructing a fire the right way was also stressed – i.e., not piling large sticks on immediately and expecting them to light.

Finally, one of the many ways of building a fire from scratch was demonstrated. This method made it easy to control the oxygen supply to the fire in its early stages, enabling full combustion and avoiding smoke.

The next training exercise focused on edible items you can find in nature when you don’t have your own provisions. As it was still early summer, the availability in nature’s larder was a little deficient. However, the comrades managed to gather some ground elder and spruce shoots, which were boiled to make a tasty soup. They also found small reed shoots that can be eaten raw, two different lichens that need to be slow-cooked in a pot over a fire to be edible, and spruce needles to make tea.

When the training was over for the day, the men gathered around the campfire. Here everyone could prepare the food they had brought with them, as the foraged plants didn’t provide a great deal of nourishment after a long day’s hiking and toil.

Many lively discussions were had, and when darkness fell, one comrade took out a song book filled with various nationalist songs. Group singing took place around the fire in the darkness, and when all the songs were finished, several of the participants took the initiative to perform other songs, with everyone singing the best they could until it was time to go to bed.

The comrades got up at their own pace the next morning, some much earlier than others, until the Nest Chief shouted, “Rise and shine!” to those who liked a lie-in a bit too much. Breakfast was consumed, and as much gear as possible was packed into the backpacks before the next item on the agenda.

Water purification would now be reviewed and practised. Drinkable water can almost always be produced by boiling lake water, even if it doesn’t normally taste pleasant. Water purification tablets are another way to neutralise potentially dangerous microbes in naturally occurring water sources. This time, however, the group had no equipment with them and had to improvise a little.

What was available was coal from the campfire, which was crushed into small pieces, and sand that was dug out of the ground next to the camp. These were placed in a plastic bottle, with coal at the bottom and sand at the top, with holes made in the bottom of the bottle. Lake water was then slowly poured into the bottle, gradually dripping into a receptacle covered with a piece of cloth. The filtered water looked and tasted much better than before filtration; however, this process is not sufficient to remove bacteria and other substances, so the water also had to be boiled in order to be suitable for consumption. 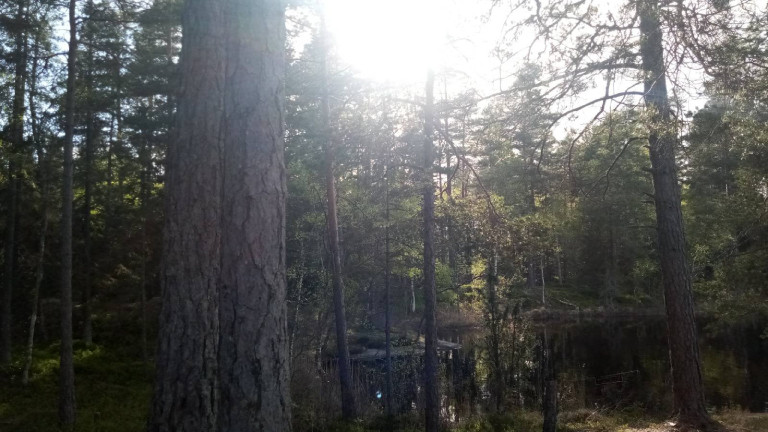 Afterwards, it was time to pack up the rest of the camp and start heading home. Walking in bright sunshine, the men went back the same way they had come the day before, a little more tired and tender in the legs, but filled with new knowledge and comradeship. Two and a half hours later they were back in the same car park where they had started the hike.

All the participants felt satisfied with the weekend and were happy to have participated. Further outdoor activities will be carried out in the Nest in the near future.