WILDERNESS ACTIVITY. Sweden’s Nest 1 embarked on another trip into the wilderness last month, this time with a focus on survival. Below is a detailed account of the weekend.

Comrades from Nest 1 held another outdoor activity on the weekend of 19-20 June.

The excursion was the second of its kind this year, and this time the weather was significantly warmer than before. One restriction for the trip was that all participants were only allowed to bring one litre of water each, which would have to suffice them for the whole weekend. As the temperature was close to 30C on both days, it was not reasonable to expect the participants to remain sprightly and alert throughout the planned tests with just one litre of water. It was therefore of the utmost importance that the knowledge of water purification they had gained on previous trips would be put into practice this time. The restrictions on food were also stricter than before – all to wean the participants off the comforts of modernity. 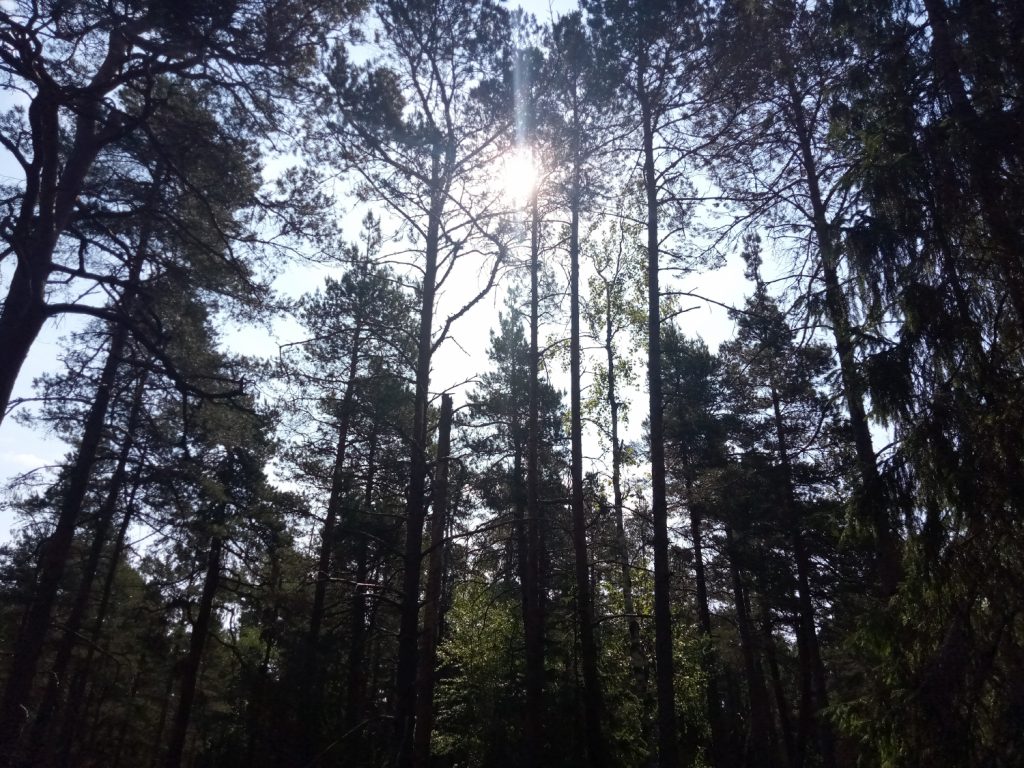 The trip started early in the morning from a location in southern Stockholm, where there was hardly a cloud in the sky. After just a few steps into the forest, it was clear that the spring weather had had a noticeable effect on the region’s bloodsucking creatures. Everywhere that was not a large open field was brimming with mosquitoes and gnats, which didn’t exactly enhance the experience. But the prepared survive, and, with a little natural bug repellent on exposed skin, the mosquitoes were hardly noticed. 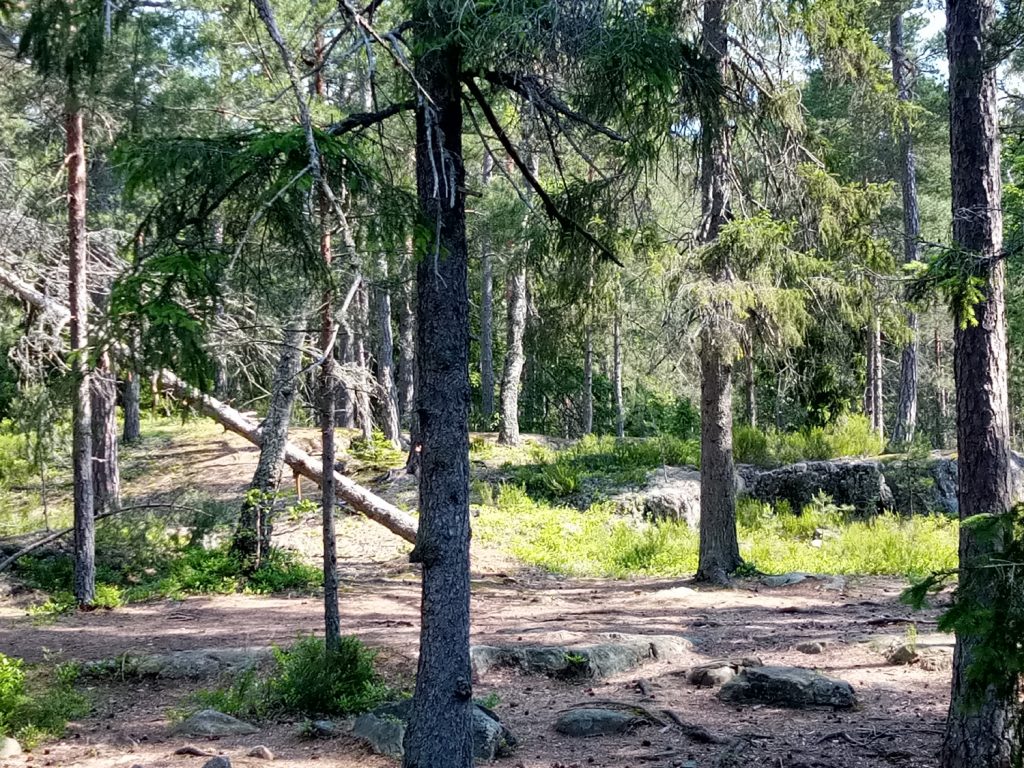 On the way to their destination, the group came across an informational sign with a map of the area. As one of the comrades had a compass with him, the decision was made to ignore any hiking trails and instead take a compass reference and practise navigating that way. The hike went through forest and mountains – and when the group finally arrived at the intended location on the map, it was evident that a compass is never a bad tool to have with you out in nature.

Once at the campsite, some comrades decided to take a dip in the adjacent lake, as the march through the forest hadn’t exactly cooled them down. The water was refreshing, but it also presented a small problem – after a swim in the lake, each participant looked dirtier than before he had jumped in. The lake appeared to be full of algae and minerals, and had a yellowish tint when scooped up in a bottle. This was the only water available during the weekend, besides the small amount that had been brought along. The priority of purifying water was now even greater.

Firewood was collected from dead trees and twigs before being sawn into suitable sizes. Meanwhile, other comrades looked for materials to filter the water. Some went in search of sand, while others crumbled charcoal from an old fireplace.

Afterwards, the work of building a shelter began. Tarpaulins, hammocks and tents were all banned on this trip, so a windbreak was the only option for protection if the heavens were to open. For some, this was the first time building such a shelter, while others were well versed in their construction. Regardless of experience, everyone helped to collect the required logs to build the windbreak, before covering it with spruce twigs. When the shelter was deemed adequate for its purpose, it was time for the day’s training. 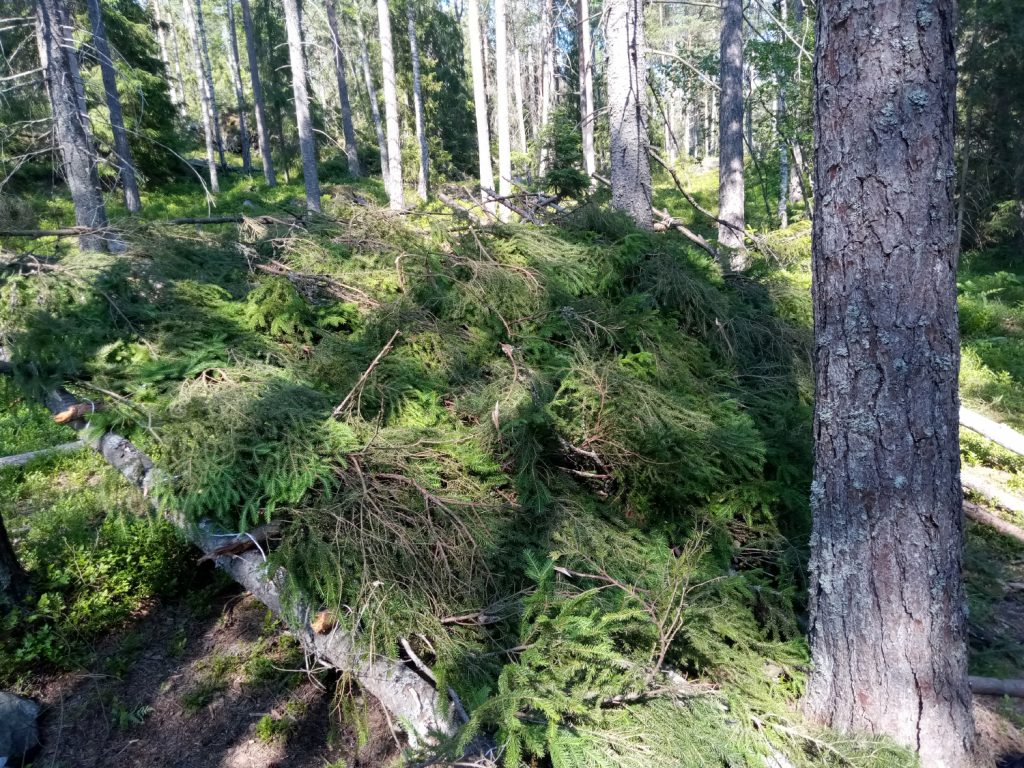 First up was a continuation of a previous course on how to make a fire. This time, suitable techniques for handling an axe when chopping and splitting wood were also demonstrated. Several different ways to build a fireplace were shown, in addition to explaining what to consider when using a fire striker, and how to make a hairpin cotter. Finally, a fire was lit in one of the demonstrated ways, and a “Swedish candle” was made to boil water.

With the fire burning, the water purification began, and would continue throughout the day and night until departure on the morrow. There was now twice as much sand and coal in the water purification bottle as there had been during the previous activity. The water inside dripped down onto a cloth, before landing in a metal receptacle; then, when enough water had been collected, it was transferred to another vessel, which was heated over the fire for at least five minutes. After the water had boiled, the vessel was cooled in the lake and filtered a final time through another cloth. Each batch of purified water became a bit clearer, and a bit more drinkable.

The dinner was intended to be a little different this time. After the fire was lit, large flat stones were placed above the flames to heat up. At least two hours later, a stone was taken off the fire and laid in a suitable place. It could now be used like a frying pan to cook meat, and the heat lasted for a surprisingly long time. 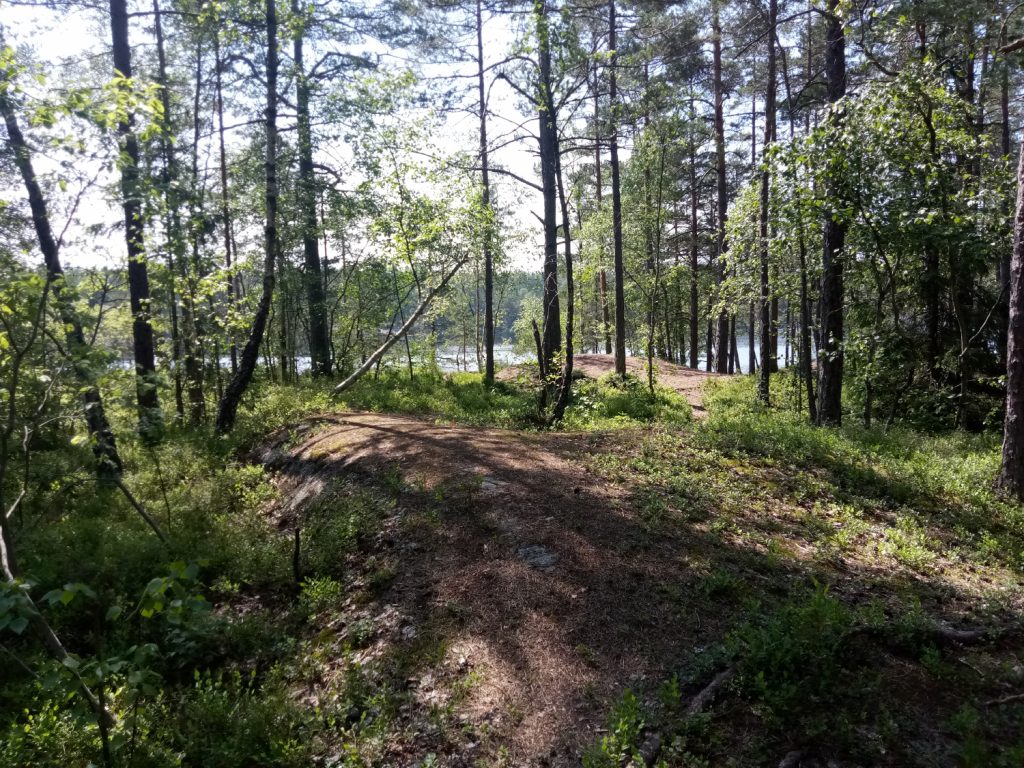 Sunset soon started to approach, which normally would have meant singing around the campfire, but this time was an exception thanks to an unexpected visitor. When most of the group had finished their dinner, a lone woman showed up at the camp. She was apparently camping by herself somewhere nearby; and in rather cryptic and cautious language, she tried to indicate that she knew who we were on account of our Tyr rune flag.

Over an hour of political discussion followed, regarding what members of the Nordic Resistance Movement believe about society at large, the future, and everything in between. Despite her initial assumption that we were in the woods to frighten people, she was not afraid to be alone at night with “dangerous Nazis”. After the extensive discussion, which hopefully made the woman a little less negative towards National Socialists, she headed back to her camp. 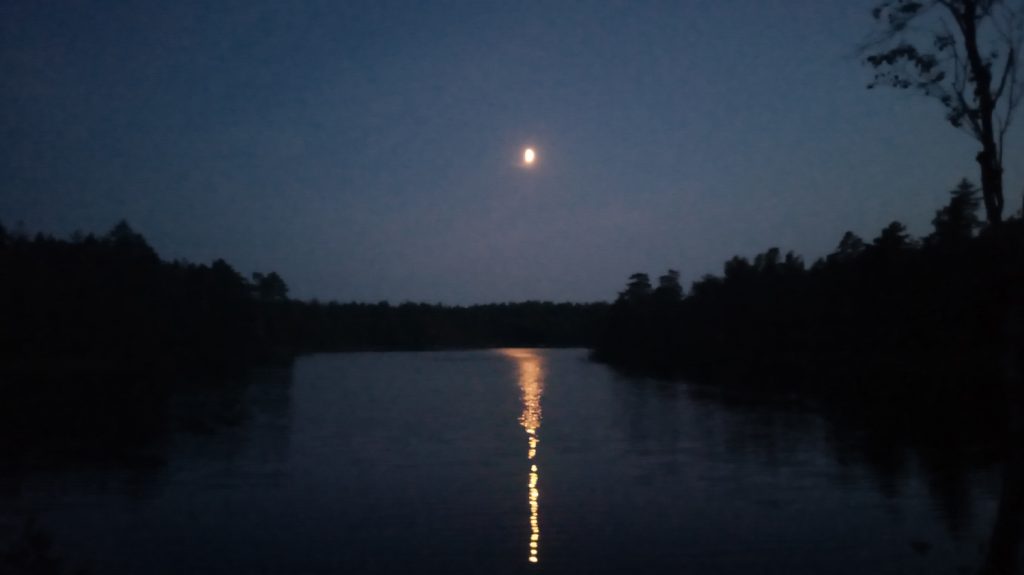 By this time, it was late enough to crawl into the sleeping bags under the windbreak. However, after 20 minutes of persistent biological and psychological warfare from Mother Nature, in the form of endless mosquito swarms that terrorised the comrades with both sound and attempts to drain their blood, the Resistance fighters were forced to go on the counterattack. A large smoky fire was rekindled, which at least kept the pests at a safe distance. The rest of the night was spent around the campfire, sometimes awake and sometimes sleeping.

On Sunday, it was time for even more training. This time the demonstrations included a lesson on how to make your own fishing rod with simple resources, and tips on how to successfully catch fish.

Another comrade gave instruction on how to build a snare for small game, where it should be placed, how big it should be, and so forth. Naturally, a snare was not set up in the forest on this occasion, as that would have been illegal. 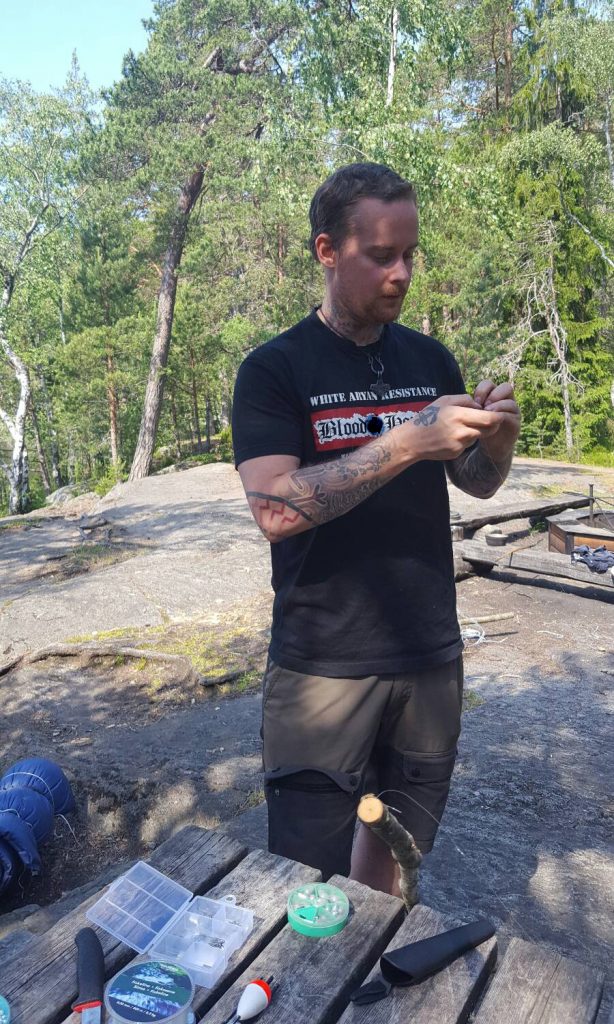 The activity was concluded sometime before lunch. Everything was packed up, and the troop went back to their cars. After a successful weekend in nature, the Resistance fighters’ souls and comradeship were both greatly strengthened by the experience! 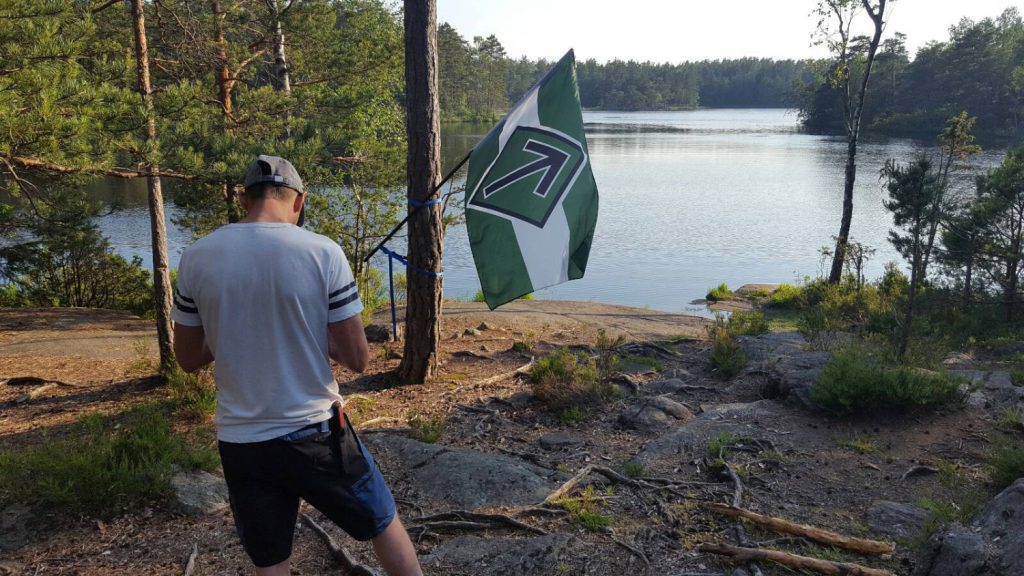