ACTIVISM. Sweden’s Nest 1 took to the streets of Stockholm on International Women’s Day to demonstrate for the safety of Nordic women.

Gender struggle, class struggle and of course some “anti-racism” – this sums up the leftist demonstration that was held on International Women’s Day on 8 March in Stockholm under the slogan “Not one woman more” – a reference to male violence against women.

This could have been a completely normal International Women’s Day, with the left and communists uniting to shout and scream their hackneyed rhymes, but one thing made this evening look a little different.

Activists from Sweden’s Nest 1 were on the streets of Stockholm to demonstrate under the slogan “Peace for Nordic Women”. Nest 1 were out on this day to show that the communists and the establishment left do not have a monopoly on classical left-wing issues. It is also more appropriate to hold such a campaign under a National Socialist banner, as a large proportion of the men responsible for the assault rapes and domestic violence committed against Nordic women are the racial foreigners the left want more of in Sweden, and which the Nordic Resistance Movement want out.

While the communists gathered on a square to give speeches, before walking a short distance to Mynttorget (Coin Square) to convey their message, the Resistance men assembled nearby and arrived at the communists’ final destination to greet them with a banner featuring the aforementioned slogan.

When the activists arrived at the location, they could hear the communists approaching. Were they shouting slogans about women’s peace and rights in honour of the day? No, instead they screamed about racism, as usual.

Imagine the communists’ surprise when they reached Mynttorget and were met by the racists they were screaming about smashing.

The approximately 300 communists now shrieked even louder and repeated their rhymes over and over again.

Some of the reds tried to approach the Resistance men, but quickly backed off when the activists took a few steps forwards. The next hour or so passed calmly until the reds ended their demonstration, at which point the activists felt they had made their point with the evening’s activity. 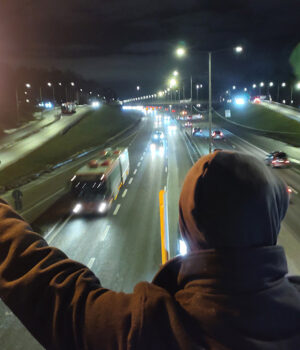