ACTIVISM. Members of the Nordic Resistance Movement held a public leaflet distribution and speech in Nyköping, Sweden, on Saturday, 13 March.

Members and activists from Sweden’s Nest 8 gathered in the city of Nyköping on Saturday, 13 March. When they arrived at around noon, the weather was grey and dull, and the temperature was just below zero. It was quickly decided that the stairs to the city hall – whose entire design seems to be taken directly from the former Soviet Union – would act as a platform from which the Nest Chief would hold his address. 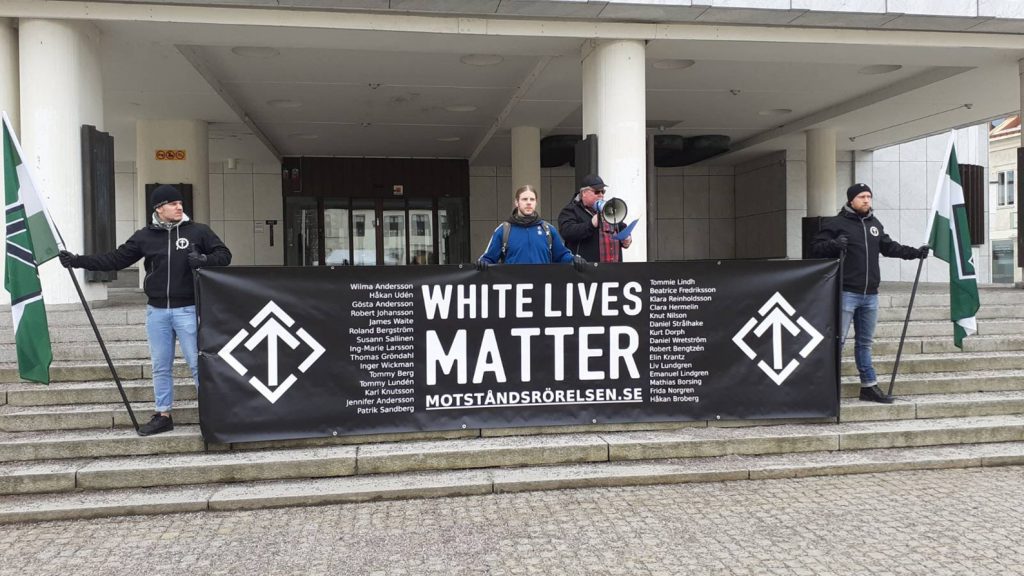 A banner with the text “WHITE LIVES MATTER” was unfurled as flag bearers took their places at either end. Jimmy Thunlind then immediately attracted all eyes when he turned on the megaphone’s siren to gain the attention of the locals. Now it was time for a speech!

With full force, Thunlind attacked the Zionist forces that pull the strings behind anti-White spectacles like “Black Lives Matter”, all while the same rootless cosmopolitans attempt to hide all the White victims who have been slaughtered and defamed by the Zionists’ executioners. While the Nordic and White race is massacred time and time again by racial strangers – via crimes that barely get a paragraph in the Swedish lying press – the Jewish community receive several full pages of coverage just because someone put a sticker on a sign near a synagogue.

All this didn’t seem to affect the psychotic crowd of “key rattlers” who gather every Saturday in Nyköping to absurdly “protest against racism” by standing and rattling bunches of keys. Whatever the purpose of this phenomenon is remains unknown, at least to the writer of this report. Fortunately, these confused people were few in number and were completely unable drown out the Resistance Movement.

After another half hour, the Resistance Movement walked down to one of the city’s more crowded commercial streets – with the police at an appropriate distance behind. This relocation led to a lot of interesting discussions with the locals. Men and women, young and old, and even many of non-Nordic descent wanted to discuss the Nordic Resistance Movement’s vision for the future. A strong majority were friendly to our ideas, and many smiles and laughs were exchanged, resulting in the leaflets being distributed at a brisk pace. A few disturbances occurred, although these were of little distraction.

After just over two hours of public enlightenment, it was decided that the goal of the day was fulfilled. All belongings were packed up, and the comrades returned to their cars. After approximately five minutes’ march, the resistance fighters were stopped by the same policemen that had been loitering at the town square earlier, now accompanied by an unmarked black car. The regime’s lackeys informed the resistance fighters that they were suspected of a crime, namely “violation of public order by unauthorised protest”. Such behaviour is standard from the police, and none of the Resistance Movement’s freedom fighters were troubled by this petty provocation – nor by the policemen’s arrogant hectoring.

The fight for Nordic sovereignty continues!