RESISTANCE MOVEMENT. The leader of the Nordic Resistance Movement went back to basics in a lecture held at a recent Nest 4 gathering in Sundsvall. Here one of the attendees gives a report of the speech. 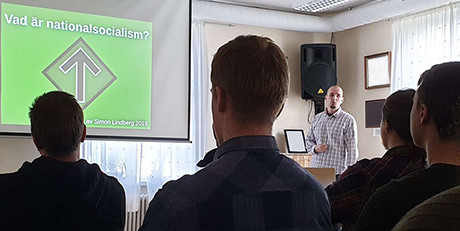 On Sunday 27 October, Nest 4 held their monthly meeting in Sundsvall, Västernorrland County. A large number of members and sympathisers gathered after the meeting to listen to a presentation by the Nordic Resistance Movement’s leader Simon Lindberg.

The mood was convivial and expectant when Simon took the floor and opened with the question: What is National Socialism? Such a question might seem elementary or self-evident at first, but perhaps that’s why it should also not be forgotten. It’s important that we do not allow ourselves to be defined as a simple movement of discontent, and as such it is necessary to explain to the world what we stand for. 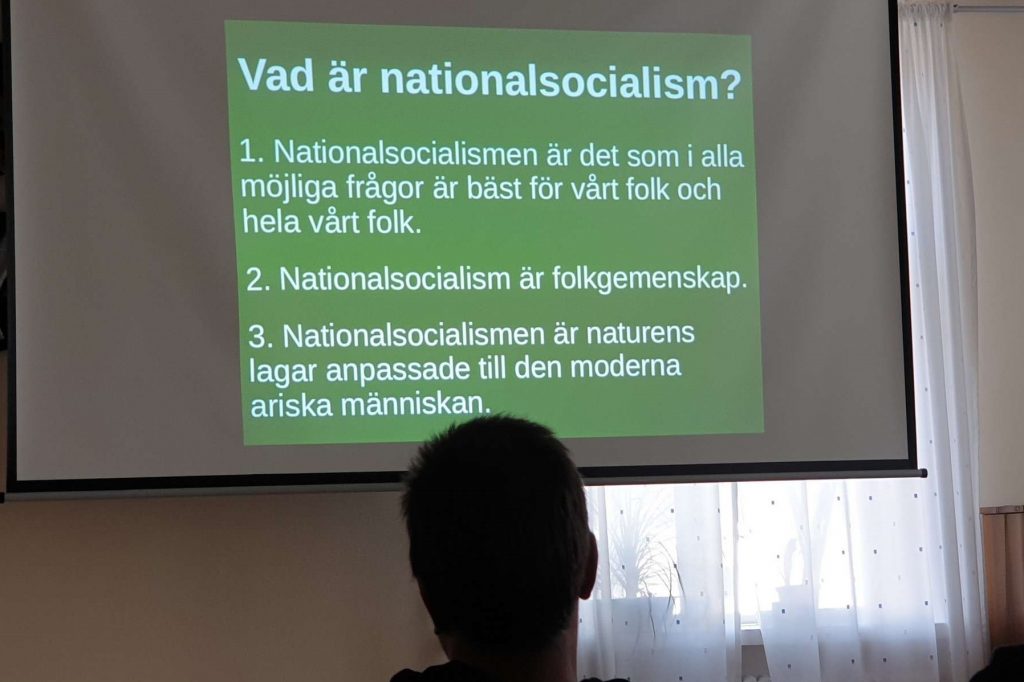 Many are of the opinion that National Socialism is just a combination of nationalism and socialism, but this is a misunderstanding. It is not an ism among other isms – not even an ideology, Lindberg explained – but a complete worldview which encompasses culture, morality and even spirituality.

Furthermore our culture was born from our blood and can only exist as long as we exist as a people – which is why we oppose integration and assimilation: our people are more than customs and culture.

See also: What is National Socialism?

Politics generally entails prioritising various groups at the expense of others, and here Lindberg gave some examples: Marxism seeks to support the workers at the cost of the upper classes, capitalists will aid businesses and the upper classes by allowing them to suppress the workers, feminism attempts to elevate women by fighting men, and liberals want to “liberate” the individual at the expense of the collective.

National Socialism differs from these in focus: We seek to strengthen the whole people and will avoid warring against other groups unless it’s absolutely necessary for our people’s well-being. This is what we call a folk community. Instead of deluding ourselves that everyone is equal, we believe our differences complete us: A business is worthless without an effective leadership, just as leaders are worthless without workers under them, just as men are worthless without women and vice versa.

Despite “socialism” being in the name, we differ from Marxism by not wanting to fight against strength and wealth to elevate the weak, Lindberg said.

He stated further that nature is holy and our worldview is based on its eternal laws. We always benefit in the long run by protecting nature, and it is our duty to protect nature’s gifts.

Some might claim that only the strong have a right to nature’s law and thus question our protection of the weak in society. But, as one member of the audience remarked, this reveals a fallacious understanding of nature as individualistic, without considering our roots as pack animals, and ignores the fact that our folk community would not exist if it were not advantageous for us.

Lindberg went on to explain that one must live as a National Socialist in order to be one. We are servants of the greater cause, and therefore we are not afraid to sacrifice our welfare and our safety for its sake. We challenge ourselves to test our boundaries and develop ourselves to better wage our struggle further, and as such self-sacrifice is central for us. The spirit which drives men to make personal sacrifices for the good of the people is a spirit that raises people and nations to the heavens! We seek no half-measures and no compromises. The National Socialist struggle would continue even if other political forces succeeded in stopping the population replacement – because society’s need for radical political and cultural change goes much deeper.

The lecture was concluded with a short question and answer session. Here Lindberg established that we are not interested in forcing other peoples in other countries to live under National Socialism as we see it because it is adapted for us. He also explained that our National Socialism will inevitably be anti-Zionist as long as Zionism threatens and attacks our people.

The finale of the talk was an impassioned tribute to the Resistance Movement and its members, who make the beating heart of Nordic National Socialism what it is. It was greeted with long, resounding applause. For several attendees this was the first time hearing such a speech, and they found it both refreshing and greatly motivating. They also commented that the atmosphere at the venue was the first true example of a folk community they had experienced.