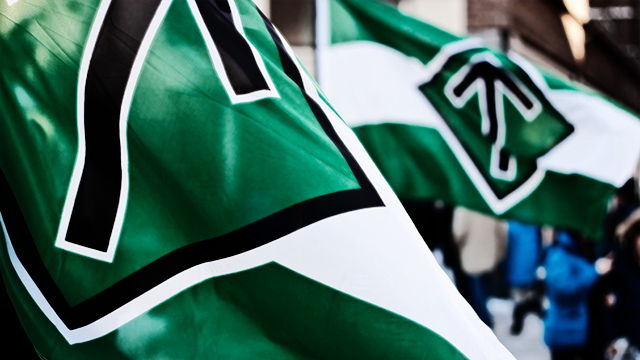 This article was originally published in Swedish on NordiskRadio.se before being translated to English to be published here on NordicResistanceMovement.org. Since the English-language podcast Leadership Perspective is a natural evolution of the Swedish-language Ledarperspektiv, I thought I would attempt to address both a Swedish and an international audience at the same time.

From Ledarperspektiv to Leadership Perspective

The first episode of Ledarperspektiv was broadcast on April 21 2018. This was in the middle of a burgeoning campaign for the fall elections, which the Nordic Resistance Movement contested. The election itself was one of the main reasons why Ledarperspektiv came about.

This was our first election, and we felt the need for an ideological grounding within the organization so as not to lose ourselves in the process. The Nordic Resistance Movement is not a party, but a revolutionary, National Socialist struggle organization with a parliamentary branch. That is why we felt it necessary to have an official podcast in which the important positions of the organization could be clarified on a weekly basis. We simply did not want to turn into a slightly more radical anti-immigration party or anything of that nature.

We quickly noticed that this was a very successful concept, especially when it came to instructing our own members on the ideology and positions of the organization. What was said in the podcast created unity in important matters. The podcast was a very effective way of communicating internally – but also externally.

It should also be mentioned that the response has been great, even outside of the organization. The podcast currently has roughly 4,000 listeners, which is a surprisingly good number considering that it is an ideologically based Swedish-speaking podcast with a deliberately serious tone to it, and that it deals with quite heavy topics – although in a relatable way.

We continued to keep an even pace, broadcasting one show every week until the summer of 2019, when we chose to take a long summer break. We felt that we needed to think about the future of Ledarperspektiv and what publishing rate would be best for ourselves and the listeners. After Lindberg and I had some discussions, we came to the conclusion that Ledarperspektiv would be broadcast once every other week, but that we would also broadcast an English-language version once a month – Leadership Perspective.

The need for Leadership Perspective

The need for Leadership Perspective is basically the same as the need for Ledarperspektiv, but on a larger scale. We want to be able to reach out with our official positions to Americans, Brits and others, but above all to our other Nordic comrades.

There are five Nordic countries, and not all of our Nordic members understand the Swedish language. We know that many Norwegians and Danes listen to the podcast, but we also know that many Finns and the majority of Icelanders don’t understand Swedish at all. This means that the official positions of the organization up until this day have not reached all the members of the organization, and that Swedes have an advantage compared to all the others, which is both wrong and unfair.

Furthermore we know that the Nordic Resistance Movement has become a source of inspiration for other organizations around the world. There have been organizations founded because of the Nordic Resistance Movement, or organizations that have utilised our model when building up their structure. This is something we should feel proud of, but also have a feeling of responsibility for. For those who now turn to us, who take their first steps towards building activist organizations in their own countries, we must act as role models and offer them all the help we can give. Leadership Perspective will constitute a large part of that need.

Is the goal world domination?

At the time of writing, Ledarperspektiv is broadcast twice a month and Leadership Perspective once a month. Time well tell if we will increase our output, but at the moment we are rather busy fellows. A purely personal thought from me is that because of this there is an even greater need for more Leadership Perspective.

Leadership Perspective will be broadcast once a month, and is currently planned to air in the middle of the month (the next episode will be broadcast on January 15). We have not yet decided all the details of the show; instead we are going through a developmental stage where small changes may take place. Right now we have two segments: ”What has happened in the struggle since last time?” and ”Ideological/Tactical question”. In addition, I will also provide an introduction of some sort.

In Leadership Perspective we are going to talk more about things happening on the international stage – responding to writings of the mass media, for instance. We might choose to focus more on pan-Nordic news in Leadership Perspective, while Ledarperspektiv may become more Sweden-oriented. But we will try things out. At any rate, we will try to avoid just rehashing things we have already talked about in Ledarperspektiv.

Swedes reading this will probably already be familiar with a lot of the ideological parts of the show if they’ve listened to Ledarperspektiv regularly, since it’s broadcast more frequently. Not slavishly following every word of Leadership Perspective is therefore not a ”crime” for a Swedish member, but please listen to the parts concerning your Nordic comrades. Repetition is good, after all.

We have this same kind of cooperation in Sweden, where it has worked excellently. There we have the political podcast Radio Nordfront, the activist podcast Mer än ord (More Than Words) as well as Ledarperspektiv, the organization’s official podcast. Sometimes our subject matters overlap, but these podcasts are still the three most popular podcasts in our roster. I regard this as a sign that we all have something of our own to contribute.

The first episode is an introduction and includes answers to questions like ”What is Leadership Perspective?”, ”Who is Simon Lindberg?”, ”What is the Nordic Resistance Movement?”, followed by some frequently asked questions. If you’d like to know more about Leadership Perspective, you can read our show description and listen to the show here.