NATIONALISM. Nordfront and the Nordic Resistance Movement attended the annual Lukov March in the Bulgarian capital Sofia on 12 February. Below follows a short report from the demonstration. 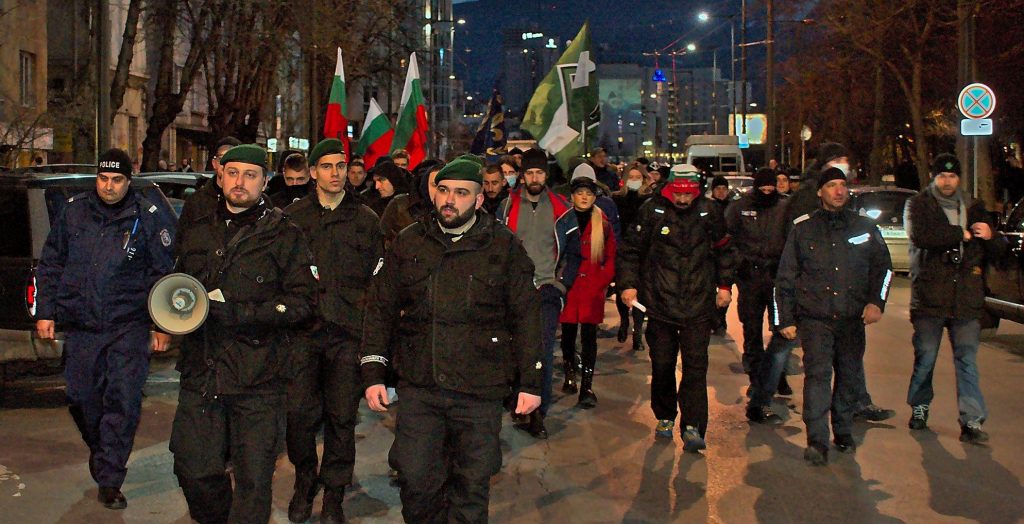 Nationalists gathered in Sofia last Saturday to honour Hristo Lukov at the annual Lukov March, which is held in connection with the general’s death.

In recent years, the demonstration has been opposed by the authorities, after the World Jewish Congress put pressure on Bulgarian politicians. In both 2021 and 2022, the organisers – the Bulgarian National Union (BNU) – won a court battle for permission to hold the demonstration.

Related: Video and photos from the Lukov March 2022

This year, approximately one thousand Bulgarian nationalists and foreign comrades gathered at the event. Among those attending were reporters from Nordfront and a traditional delegation from the Nordic Resistance Movement, who walked in the march with the organisation’s Tyr rune flags. Nationalists from other countries, including France and Germany, were also present.

The police presence during the day was particularly large, with police officers positioned in pairs on many street corners. A weak counter-demonstration was also organised, which drew just over 100 people.

At 17.30 local time, the gathering began at the National Palace of Culture, where several speeches were held by representatives of the Bulgarian National Union. However, at the last second, the mayor suddenly announced that the Lukov March would not be allowed to proceed, citing safety concerns in the city.

Luckily, the organisers were well prepared for such a move, following attempts to stop the march in previous years, and had already applied for permission for three different smaller demonstrations.

The assembled nationalists accordingly divided themselves into groups and took different routes. The group Nordfront joined stopped halfway en route to the final destination to listen to a speech by the main organiser of the march, Plamen Dimitrov. Dimitrov has been a guest on Radio Nordfront on more than one occasion, and is both the local leader of the BNU in Sofia and the representative for the organisation’s international relations.

After Dimitrov’s speech, the march headed in the direction of the hero general’s home, where he was murdered by Bolsheviks on 13 February 1943. There, further speeches were held by more BNU representatives.

The demonstration was conducted without disruptions and concluded around 20.00. Although the organisers succeeded in outmanoeuvring the police’s ban, the police still behaved correctly and followed the demonstration from a distance. The few left-wing extremists that protested against the march were no problem for the police to keep away.

After the demonstration, a gathering was held at the BNU headquarters.

A photo report and video from the event will be published on nordicresistancemovement.org in the coming days.