ACTIVISM. Activists and members from Sweden’s Nest 1 and Nest 8 visited the annual autumn market in Strängnäs on Saturday, 9 October.

The market attracts thousands of visitors and is a great opportunity for a public awareness activity.

After gathering to review the plan for the day, the group headed to the market. There they set up with a banner flanked by flag bearers and gave out leaflets to passers-by.

People immediately started talking to one another about the message on the banner – White Lives Matter – saying things like, “Shouldn’t it be ‘Black Lives Matter’?” but also, “They have a point there”.

Just five minutes later, the market general himself arrived in person, with a folder stuffed under his arm to make himself look extra important. He strode forwards and started shaking his fist and bellowing, “You can’t stand here. We have hired the entire market area!”

It was promptly explained to the pompous gentleman that the right to freedom of assembly clearly trumped the fact that he had hired the market area.

He then declared he would ring the police, and at that moment, like magic, the first police car arrived at the scene. Out stepped two officers, who looked like they had just woken up after an afternoon nap in the car.

As usual, one of them tried to find out who was responsible for the action, but to his surprise, it turned out that no such person was present.

Both of the constables then withdrew to the other side of the street and began an animated conversion with someone on their walkie-talkies, presumably their superior who turned up shortly thereafter, looking just as drowsy as his colleagues.

By this point, the market general had disappeared from the area with his tail between his legs after the police had informed him that the right to freedom of assembly also applied to “his” market.

Many passers-by took the time to stop and ask questions to the Resistance men, including adults and youngsters, some of them negative and some positive.

When close to an hour had passed, the comrades decided to move to the most crowded part of the market. As the street was tightly packed with people, the group set up with one flag bearer in the middle of an intersection. A large number of young people had followed the Resistance men; however, some dark-skinned individuals of dubious origin had also arrived on the scene. Together with a few of the Swedish youths, they attempted to provoke the activists, but as they looked to be between the ages of 12 and 16, they were simply ignored.

After a while on the crowded street, another relocation was due. The young onlookers, who had now doubled in number, again followed behind.

After more than two hours of disseminating information, it was decided to conclude the activity. However, this was easier said than done, as a long line of young people formed behind the activists and followed close on their heels. The ensuing scene presumably looked like a demonstration to onlookers and passers-by, as the Tyr rune flag fluttered in the wind at the head of the procession. 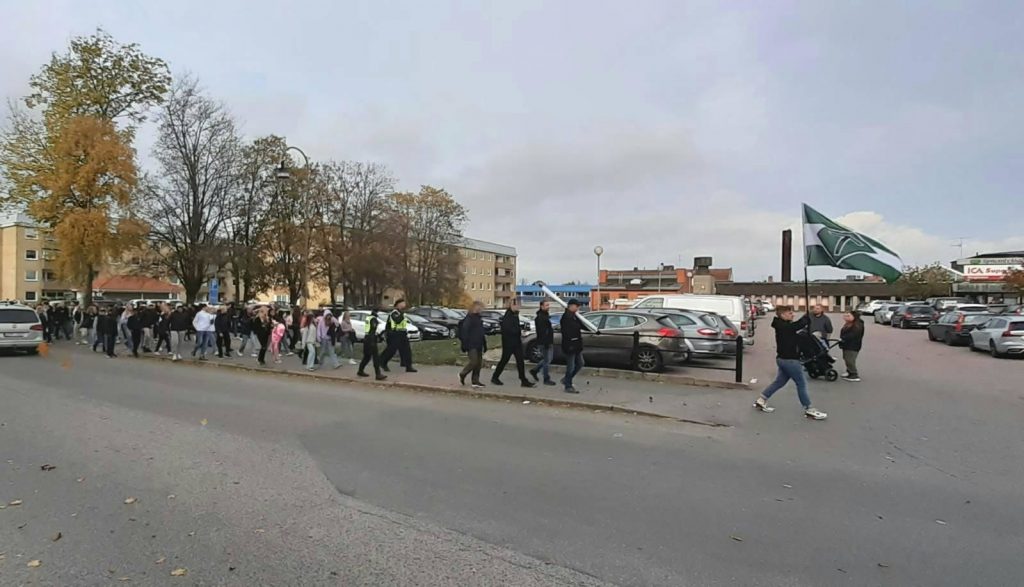 When they had passed the town centre and arrived back at their starting point, the activists had to explain to the police and their faithful line of followers that they were ending the activity. They told the constables they could go back to another coffee break, while the young people were informed they could read more about us on the Resistance Movement website.

It appears that a return to Strängnäs will be in order, as the day can only be viewed as a success!