IDEOLOGY. The Norwegian writer “Russleman” explains that the time to take your rightful place in the struggle is now, and not a moment later. 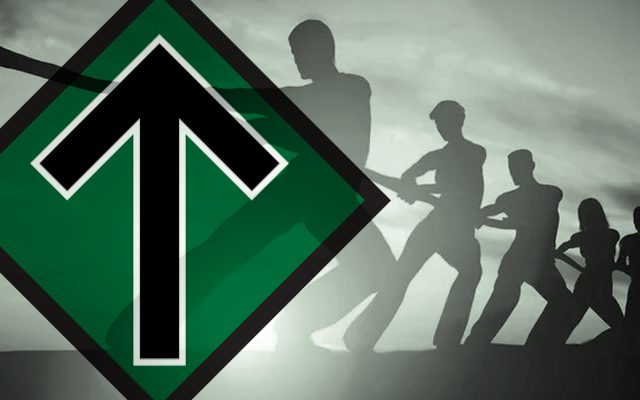 It has now been a year since I witnessed surrealistic videos of burning cities and police stations in the USA, in the wake of the death of the criminal George Floyd, America’s new patron saint. The BLM riots, in true Bolshevik style, represented a new escalation of anti-White hatred, as the same police who routinely oppress peaceful White Americans demonstrating for their rights bent their knees for anarchists and black radicals. It was at this time, when the then president Donald Trump hid in a bunker under the White House while a media-supported lawlessness embraced the “world’s freest country”, that I realised I could no longer justify sitting on the sidelines as an observer.

Like many others, I had my excuses, but they were ultimately just that. Excuses.

“I fear for my children.”

“It’s not the right time for me yet.”

I’m sorry to have to tell you, but there is no “right time” to become a political dissident. Confronting the ruling powers is always something that will cost you, and it will always involve a large degree of self-sacrifice from you as an individual.

As for the rest of the excuses, they have varying degrees of legitimacy, but the most understandable without doubt is the fear of what might happen to one’s children. However, this is ultimately not a good enough excuse, because if you choose not to fight for your descendants’ future, that future will obviously not be bright. The only thing you will achieve is that the system will come for your children at a later point in time.

Listen to this song from the San Francisco Gay Men’s Chorus. Look into the empty, sociopathic gaze of this man while he confirms what you already knew. That this is about corrupting your children, and it always has been. The only difference is that we have reached a Weimar-point, where they increasingly feel they have enough power to do away with any pretence of kindness and openly mock concerned parents.

So yes, you can continue to remain passive and stick your head in the sand if you want. At best, it will be your grandson, instead of your son, who is fully indoctrinated with LGBTQP and anti-White ideology, as well as being brainwashed to hate his own parents. The only thing you will accomplish is postponing the pain to a later date.

Remember, the pro-Jewish, neo-liberal regime is desperate to isolate and atomise Whites because so much of its power structure is dependent on intimidation and oppressing us as individuals. The population replacement is necessary for them because ultra-capitalism and cultural radicalism simply cannot be imposed upon a homogenous population, as it will be met with an organised backlash. Pro-LGBTQP ideology is struggling in Eastern Europe precisely because the demographics there are still mostly intact.

And even if things look really bad in comparison in Western Europe, you’ll be shocked at what a small group of Whites can achieve as long as they are focused, hyper-political and have solidarity with one another. We have neither the resources nor the connections to power that our opponents have, but what we do have – which should never be underestimated – is the fact that what we believe is correct, and that we work with the average person’s deep instincts, not against them, which puts us in a position to accomplish very much with very little.

As Whites, we have one thing to learn from Jews, and that is organisation. By ensuring that over 90 percent of their population are politically active, this little group has been in a position to take control of the West, but they have only managed it because they are the only ones playing on that level. If Whites began to play the same game (as the National Socialists did in Germany in 1933), the Zionist world order would unravel in the course of a few years, which they themselves are fully aware of.

The same case applies on a national level in Norway. A few tens of thousands of neo-liberal cosmopolitans from Oslo and Bergen can only impose their values on the rest of the country because they have no large organised opposition. And the men who are in a position to organise this opposition, such as Helge Lurås, Hans Rustad, Sylvi Listhaug and Vidar Kleppe [ed: political “oppositional” leaders in Norway], refuse to do it despite having all the people they need between them, and – as controlled opposition – will never do it.

The hardest truth I was ever forced to accept was that no saviour from on high is coming to help. It was always me. And it was always you. You are the person who must liberate yourself and your children, or no one will. Whether it is a matter of fate or pure coincidence that gave you the specific psychological traits that led you here is ultimately irrelevant. The hard truth is that if you are reading this, YOU are among the few who have been designated to be part of the vanguard that will pave the way for a better future. You can either accept this or continue to hide.

Regardless of who you are, you have something to offer, and there are many roles to step into in the Nordic Resistance Movement (or your national equivalent). Any contribution is better than passivity. The time of being satisfied with sharing edgy memes on Telegram is over.

It is time to take your place in the struggle!