ACTIVISM. Activists from Norway’s Nest 6 chronicle their trip from Stavanger to Sweden and back to take part in Nordic Days, and their activism along the way. 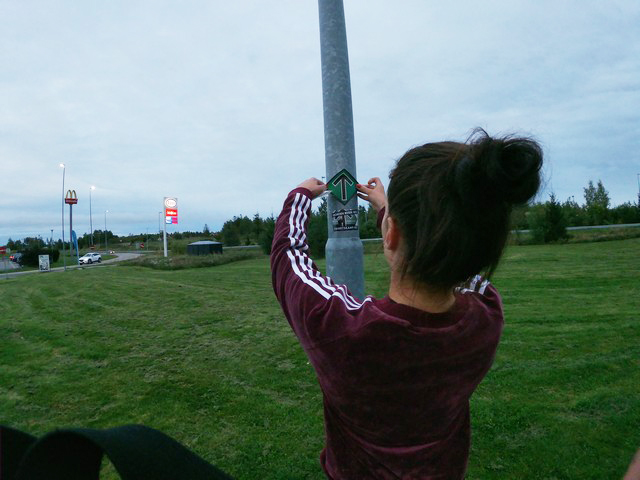 To coincide with our journey to this year’s Nordic Days, we saw an opportunity to include some activism on the long drive from Stavanger.

We had many ideas for activism and were in the middle of producing a large number of posters ahead of the trip. Leaving late on Friday, we started the first action just before reaching Kristiansand, and then made several stops at petrol stations and bus stops, where larger posters were hung up along the road.

We arrived too late to catch the last ferry from Horten to Moss, so instead we stayed overnight in Horten. During the ferry trip the next day, the opportunity was taken to place a few stickers around the ferry.

We also had the pleasure of a very enjoyable meeting with a politically engaged Polish man. He didn’t mince his words when bringing up subjects like communism, the authorities in his home country, and the situation in Europe in general. He told us about his great commitment to the cause as a young man, and sincerely and optimistically wished us good luck in saving the Nordic region. This was an impactful and motivational meeting for us, and a bit of a coincidence that we were to talk with such a man on our trip.

Over in Moss we made a short stop in Nesparken park, where we enjoyed the beautiful scenery and put up posters and stickers. We then went straight over the border, where we unfortunately arrived a little late and missed the Nordic Man of the Year competition and Simon Lindberg’s speech. We were still happy to have arrived, however, and proceeded to pick a spot to pitch our tents.

Saturday evening was enjoyable and engaging, with the naming ceremony making a particularly strong impression. The last day quickly disappeared in good conversations, new acquaintances, clearing up our camping area, and adding the finishing touches to several posters for the trip home.

We left with a strong sense of unity and fighting spirit, and over the weekend we purchased great-looking T-shirts and jewellery. In addition we acquired two swastika flags, which, on the right occasion, will legally be hoisted in Rogaland!

We made a short stop on the way back to secure a large amount of new stickers and flyers, which were quickly put to use during our first stop. Before making our last stopover prior to reaching the border, we came across a magical place by a calm lake. Here Sweden’s nature made a real impression.

We placed some stickers on the return ferry to Horten, and then at several stops on the roads home. We put up a good number of posters, both large and small, all of them very visible to passing motorists. As it was getting late, we planned an extra night of camping in Lillesand before the trip home. This was another fantastic encounter with nature, where we slept out in the countryside under a tarpaulin.

We woke up to 22 °C weather in Southern Norway, where it was apparently still summer, and had ourselves a refreshing bath in the sea. We had some pleasant conversations with campers and placed stickers in the area before we left.

The trip back to Stavanger included productive stopovers along the way, during which a number of posters were placed in bus stops and in villages. All in all, it was a successful trip filled with beautiful scenery, effective propaganda distribution, meetings with like-minded people, good discussions and – last but not least – listening to podcasts from Nordisk Radio.

We look forward to next year!

Photos from the trip: