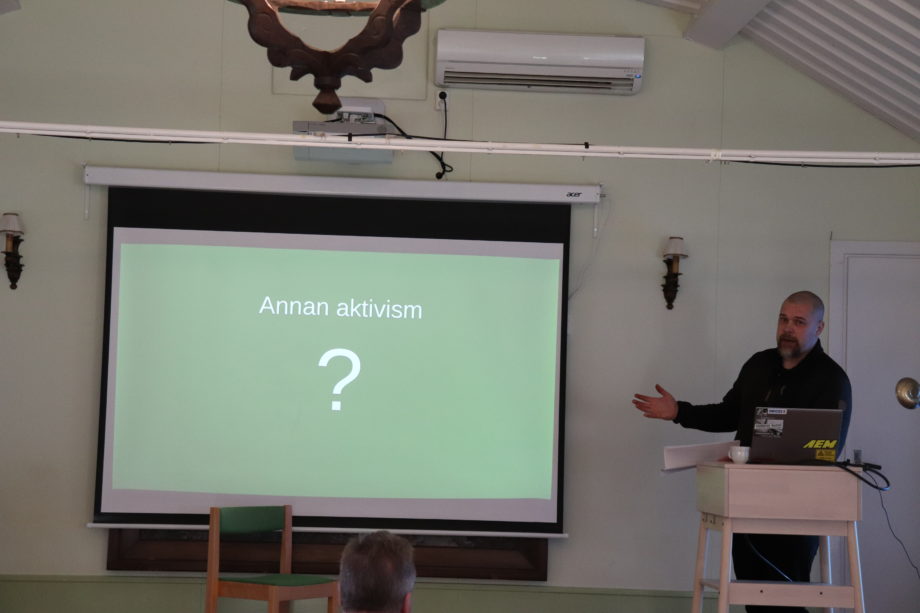 On Sunday, 8 November, activists and members from Sweden’s Nest 8 assembled for their October monthly meeting, which was held a little later in the month than usual. The day began with a bracing energy boost for the activists and prospective members in the form of outdoor martial arts training in the faint November sun.

Others preferred to start the day in a calmer fashion and showed up a little later in the morning – together with some other long-distance travellers – for the unmissable meeting fika.

Like last month, illness meant the turnout wasn’t at a hundred percent, but those off sick weren’t the same ones who were forced to miss the previous meeting.

The Nest had the honour of a visit by the radio chief and National Council member Fredrik Vejdeland, who was on one of his rare visits to this part of the country. After the fika, he took to the podium for a lecture on the theme of “Other activism”. The entirety of the lecture can’t be covered here, but below are a few key points.

A new age partly requires new methods of activism, Vejdeland explained. This doesn’t mean we will stop conducting the activities that have constituted our main focus up to this point – basic activism and public leaflet distributions are still entirely legitimate and effective methods of activism.

A street presence is always essential for a revolutionary organisation. However, when it comes to major, officially sanctioned demonstrations, the future is uncertain.

Our activism needs to be generally expanded and become more creative. But in addition to all the new forms of activism that Vejdeland described, there are also examples from the Movement’s past, he explained.

Examples of the former are town square rallies and leaflet distributions relating to a current event. Other examples are more daring “Skorzeny actions”, such as rappelling down a high building. A third example comprises activities relating to criminality, such as night patrols or demonstrating the correct punishment for a particular criminal.

Examples of symbolic actions can be “social actions”, such as soup kitchens for vulnerable Swedes, or “troll actions”, e.g., a poster announcing a traitor’s real message, in contrast to the lies listed on his official poster.

The lecture generated questions and lively discussions, with several people expressing how Fredrik’s words inspired them.

The Resistance men and women were hungry after the lecture, but luckily the organiser group were on hand to serve lunch.

After lunch, the members’ meeting itself was held. Nest chief Jimmy Thunlind began by reading out a letter that the Nest intends to send to the 17-year-old American Kyle Rittenhouse, who currently sits incarcerated and charged with murder despite his  innocence.

The month of October in Nest 8 has been packed with activity in the form of basic activism, wilderness activities, training, study circles, propaganda production and – for some – a public activity in Berlin.

Plans for the coming month promise continued industrious work for the struggle.