1 MAY. Due to the coronavirus pandemic, the Nordic Resistance Movement’s 2020 1st of May demonstration was postponed. In its place, a digital 1st of May celebration, featuring speeches and more, was broadcast on Nordisk Radio. Below is an English translation of Simon Lindberg’s speech. 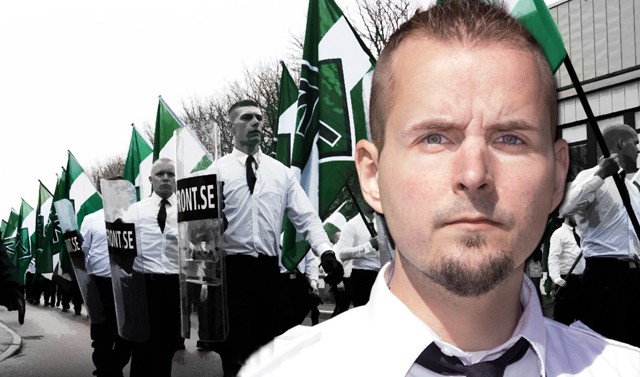 Good day, folk comrades. I would like to begin by wishing you all a thoroughly good 1st of May!

I should really be standing in central Uppsala right now, looking at all of you eye to eye and sensing the spirit of the struggle in the air – and the testosterone of all Nordic freedom fighters simmering. I would have heard the effeminate voices of the anti-labour Left. I would have seen the obedient slaves in blue commit violence against my comrades as they protected themselves against those stone-throwing, dirty and drugged-up dreadlocked types among the counter-demonstrators. I would have also had many pleasant conversations with members and sympathisers and enjoyed true comradeship and folk community. It would have most likely been a memory of a lifetime, and definitely much more fun than sitting here and talking about how it could have been. Real street activism beats “online Nazism” every day of the week, after all. But there’s no point in complaining.

Instead the corona pandemic has gotten in the way and has become one of the most important priorities in the globalist world order, along with open borders and the well-being of big finance. Naturally we in the Nordic Resistance Movement will not let it silence us – no, the struggle goes ever onwards until the day we National Socialists control the North. So we’re making the best of the situation as usual, which is why I’m speaking to you now via this medium instead. The voice of truth must not be silenced, but must instead reach out – no matter what.

On this topic it’s important to mention that we’re not cancelling our demonstration in Uppsala but rather postponing it until things have gotten back to normal. Instead, see this speech as a bonus. We can now experience both real street activism and everything associated with it, plus this secondary alternative. After all, I’m sure all of you listening are men and women of honour, who are not just content to consume our struggle for survival but are also willing to join our ranks for street activism and demonstrations. Thus I greatly look forward to seeing, meeting and talking with you in Uppsala when the time comes.

In honour of the day, we in the Nordic Resistance Movement have put up posters across all of the Nordic countries explaining that we are the real workers’ alternative. I thought I might therefore take the opportunity to speak a little more about this subject – i.e., what a real worker is and why it is we – and not the Left led by Lövfen and his ilk in the other Nordic countries – who are the real workers’ best alternative.

A real worker attends to his gainful employment in an exemplary fashion, but he doesn’t work just for his earnings. Not just to add his hard-earned ones and zeros to his account at the end of the month. No, a real worker also takes pride in his handiwork and is happy to be a part of the community that drives the nation forwards. The real worker understands that all people are different and complement one another – and therefore that the workers of the mind do not look down on the workers of the hand, and that employers do not exploit employees – or vice versa, for that matter. There are more important values for a real worker than maximum profit, whether that worker is a business owner or an employee.

The lawyer, engineer, economist and manager understand they wouldn’t be anything without the carpenter, nurse, industrial worker and childminder, and vice versa. The employer understands and takes pride in the employees’ efforts and the fact that together they create the whole, the greater community. As such they have a great mutual respect for each other.

The real worker also takes this pride and sense of duty with him after the clock strikes five and it’s time to go home. A pride in being a vital part of history’s most successful nation and the world’s most advanced people. A sense of duty that tells you it’s a requirement of life to do your part – out of respect for our ancestors’ hardships and with the utmost consideration for our coming generations of Nordic boys and girls.

This contribution is made not just at the factory, office, garage or farm, but also at home and during leisure time throughout all waking hours of the day. The real worker is constantly ready to defend our people’s survival and freedom, as so many previously did over the course of history, ensuring we are who we are and remain who we are. And he is never a stranger to being there for those around him, regardless of whether it’s a family member, neighbour or just a hereto unacquainted kinsman in distress.

But of course life is not just work, struggle and seriousness. A real worker also knows that he should enjoy life and make use of every occasion for relaxation and recreation. A six-hour working day would provide ample opportunities for this. Perhaps an outing in our beautiful, clean and well-kept countryside with one’s many children. Or maybe an evening stroll in the safe and secure inner city.

The real worker is a part of the folk community – a blood community that exists 24 hours a day, from life’s beginning to its end.

At least… all this would be what it meant to be a real worker if a real workers’ party held power in our country. A party that took care of all sections of the people and gave everyone the possibility to attain their full potential. A party that really looked after its own people instead of opening its arms to the whole world. A true workers’ party that provided the best for the real workers and their families, regardless of their gender, age or socioeconomic status.

But the reality is that 2020 looks considerably different. Instead of the scenario I described, we have the Social Democratic Party in charge. A party that perhaps at one point in time – maybe when your grandfather was young – defended the real workers, but which year after year since has increasingly abandoned them in favour of foreign benefit claimants. Exchanging the people has replaced protecting the people.

In the socialists’ Sweden, Marxist class struggle and liberal capitalism rule hand in hand. The regime prides itself on being a feminist government in a multicultural country. However, this is the only pride that exists. As for the downtrodden people, they must just be grateful and feel shame.

Egocentrism, constant conflicts, knives in the back – both figuratively and literally. Decadent anti-culture drowning our existence. Drugs and escaping from reality.

In the socialists’ Sweden you first get robbed of your tools at work by a gang who can’t speak any Swedish except for something perverse about what they want to do to your mother. You get robbed again by the corporation you work for when they give you exactly the minimum salary necessary to keep you in check as an obedient slave. Then you get robbed a third time by the state when they take half your wages in taxes. But at least you get some great things for your tax money – you help to bring even more racial foreigners and suburban gangs here so they can mug you for your mobile phone and wallet when walking home from work.

Stress. Insecurity. Misery. In the socialists’ Sweden, the opposite of a folk community prevails.

But a real worker isn’t stupid. He or she understands that life can be so much better. That we are meant for something more – something greater. A real worker is also not cowardly. He or she fights actively to change tomorrow, sacrificing his or herself unselfishly for the higher cause. The real worker is an upright Nordic manly man or womanly woman, who stands behind the real workers’ alternative – the Nordic Resistance Movement!

The 1st of May is the workers’ day of celebration. A big thank you to you for celebrating this holiday with us, which has been usurped by both anti-worker and anti-white forces. By doing so you help us take this day back for us, the real workers.

To conclude I would like to remind everyone of an important reason why the 1st of May in particular came to be the day when we workers assemble in our ranks. I’m referring to the memory of the real workers felled by the system’s bullets during the Haymarket massacre in Chicago in May 1886. These strikers who fought for an eight-hour work day are referred to as anarchists today, but believe me when I say they would turn in their graves if they could see how today’s so-called Left treat their legacy – how they perverted the old working heroes’ healthy ideals.

In 1886 they fought bravely on the streets, for the rights of the workers against big finance – not to help the capitalists in their quest for wide-open borders and the dissolution of all natural norms.

In 2020 we fight bravely on the streets, for the workers’ rights against big finance – for a homogenous nation and a natural world order.

If August Spies were alive today and living in one of the Nordic countries, I can guarantee that he would be a leading activist in the real workers’ alternative – the Nordic Resistance Movement!

So make the most of the day off and take it easy and relax with your family.

Then join us tomorrow and honour the memory of Spies and the many other heroes of our race who fell in the struggle for freedom and justice. Join us and make sure that you too become a hero future freedom fighters will remember in a hundred years. Life is too short to be a coward. Join us instead and fight and live forever!