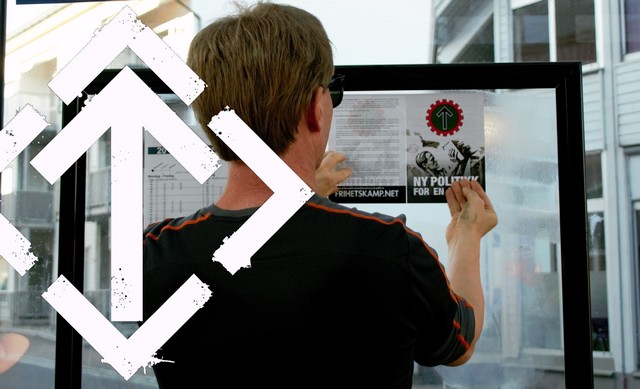 Activists and members from Norway’s Nest 1 held an all-day propaganda campaign in Moss, Eastern Norway, at the end of September.

Large numbers of posters and stickers with the Resistance Movement’s message were placed across the whole town. Leaflets were delivered to post boxes, as well as being handed to drivers and pedestrians who were on their way to and from the Bastø ferry. Many people gladly accepted the leaflets and appeared sympathetic to the message. Leaflets were also placed on the windscreens of a large number of cars that were parked at the dock.

During the activity pleasant conversations took place with several passers-by and residents of Moss.

The members were also accosted by a Norwegian woman on an electric scooter who didn’t like the Resistance Movement’s message and wanted to show them by tearing down a poster with the text “For a free and united Nordic Nation”. When she was asked why, she said she had a bachelor’s degree in political science, as well as a Swedish boyfriend, and thus had the expertise to assert that there are no problems caused by mass immigration in the Nordic countries.

After a few hours of activism, it was time for a break at a restaurant with good food and drink, before heading out again and continuing.

When evening arrived, the activity was concluded with a banner action on a bridge over the E6 motorway in a northerly direction towards Oslo.