HISTORY. On February 23, 1930, the National Socialist martyr Horst Wessel died after being attacked and seriously injured by members of the Red Front in his home in Berlin. 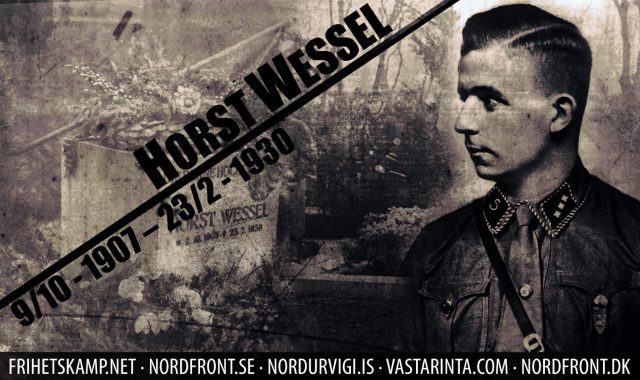 On October 9, 1907, the National Socialist martyr Horst Wessel was born. Wessel joined the National Socialist German Workers’ Party (NSDAP) early on and became active in the Sturmabteilung (SA), where he fought on the streets of Berlin under the leadership of Joseph Goebbels. On account of his bravery and heroism, he quickly assumed a leading position within the SA.

Wessel was both beloved and hated among the communists in Berlin. Alongside his other activities, he would try to infiltrate their meetings and propagate for National Socialism and win their members over. Wessel manifested a warrior spirit and eventually became the foremost martyr of the German National Socialist struggle in the Kampfzeit. One of Wessel’s poems, “Die Fahne Hoch”, was set to music and became the NSDAP’s official anthem and a “second national anthem” next to the “Deutschlandlied”.

Wessel passed away on February 23 after being attacked and seriously wounded by a large group of members of the Roter Frontkämpferbund (Red Front) in his Berlin residence on January 14. At the hospital, Wessel was visited by Joseph Goebbels. Wessel was lying in bed with an elegiacal expression on his face, in anticipation of death, yet whispered to Goebbels: “We must continue the fight.” Goebbels later wrote in his memoirs: “You will live on with us and participate in our victory.”