ACTIVISM. On Saturday 16 February comrades from Nest 2 were once again out on the streets of Gothenburg. 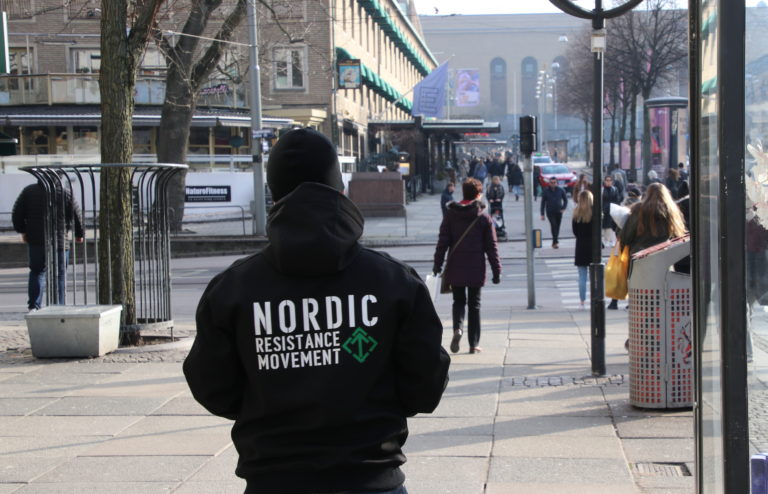 At around noon the activists met on Avenyn, the city’s main boulevard, to hand out the “Duty Calls!” leaflet. The activity passed very calmly. Some passers-by were uninterested, while others were unpleasant, due possibly to their irritable nose rings, ill-fitting crop tops or unsatisfying lives. Everyone else was much more willing to talk, mostly about mass immigration and its many negative consequences.

One man admitted the current inflamed state of public discourse in Sweden created by the media is guaranteed to work in the Nordic Resistance Movement’s favour. He said that constantly attacking everyone who does not agree with the approved media narrative will cause free thinkers to search out alternative ideas – and that after a while they will discover a strong and determined organisation… He congratulated us in advance and walked on.

In contrast to many previous public activities in the city, the activists were spared a visit from the strange and disagreeable types who usually oppose National Socialism, a healthy lifestyle and open discussion with the people. Gothenburg’s “trans-proletariat” were presumably too drunk – or worse – to get dressed up and make a show of themselves this time.

The only disruptive visitors were a group of sportsball fans who appeared to have begun the day with stronger drinks than tea or coffee. Fortunately, only one of them had trouble behaving himself, which his companions ascribed to him not having had any friends when he was a child and consequently growing up to be a socialist. The rest said they were unpolitical, but didn’t like “camel therapists” and “jungle noise”.

The next person to come along was a racial stranger who was curious about what the activists were giving out. After being offered a leaflet he began to shout and shake his head, calling the activist who had given him it a “Nazi” and telling him he should go home. The Resistance Man replied that it would be more appropriate if the racial stranger went home to his own country instead, after which the man tried to snatch the activist’s body camera. This poor act of judgement was answered by a powerful right hook.

The racial stranger was overpowered and fell backwards. People continued to walk past, assuming the man was yet another kind of strange counter-demonstrator who had suddenly thrown himself to the ground in protest.

Prior to this incident, the activity had involved the ideal amount of police interaction – i.e., none at all – so rather than spoil things, it was decided to end the leafleting 15 minutes early so as to avoid any difficulties that might delay the upcoming Nest meeting.

All in all it was a very good day in Sweden’s second biggest city. The Nest is growing and becoming stronger, and regular public activities will continue apace in western Sweden.