RESISTANCE MOVEMENT. Fredrik Vejdeland explains how the politicians’ attempts to destroy freedom of association in order to stop the Nordic Resistance Movement are failing to impress. 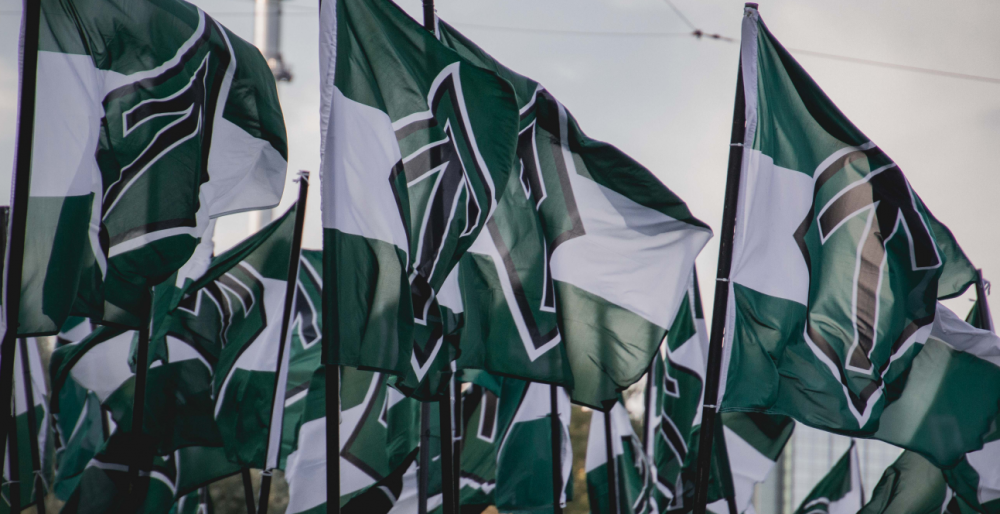 Earlier this month, the Minister of Justice Morgan Johansson announced in a press conference that the Swedish government wants to stop participation in so-called racist organisations before the 2022 election. In other words, primarily the Nordic Resistance Movement and then all other organisations that oppose the population replacement and other criminal activities of the Social Democratic regime and their cohorts.

Morgan Johansson is a typical lackey in all respects – obedient and spineless. But the ruthlessness with which he is prepared to destroy all of our freedoms in order to satisfy his masters does not always mean that he is successful – on the contrary.

Regarding the attempt to stop participation in racist organisations, I would like to clarify three things in this text:

1. THE PROPOSAL CONCERNS THE DESTRUCTION OF FREEDOM OF ASSOCIATION AND CONTRAVENES THE BASIC LAWS OF SWEDEN

There is currently a quasi-debate going on – both among the politicians who produced the proposal, and in the mainstream media that is supposed to convey information about it to the public. Via this debate, they want to fool people into believing that there are two different alternatives, which is ridiculous as these alternatives essentially lead to the exact same thing.

In their parliamentary committee, they have discussed whether they should attempt to criminalise racist organisations or participation in racist organisations. We are told that some of them have been more in favour of banning us than others. That’s why they have compromised, “in the spirit of democracy”.

Here I would like to urge everyone who might become a target of the ban – that is, everyone from National Socialists to critics of immigration – not to use the enemy’s narrative, and not to fall into the trap of believing there has ever been a better or worse proposal. Both lead to a ban of our organisation and the destruction of freedom of association.

No one will want to be a member of an association if they, through their mere participation, risk several years in prison. Thus, people are no longer assured of “freedom to associate with others for public or private purposes” (the Instrument of Government, Chapter 2, Section 1 – The Basic Laws of Sweden).

Vera Oredsson made the best comment about all this when the proposal first leaked, summing it up thus: “You’re not allowed to starve, but it’s forbidden to eat.” That’s the level it’s at.

Furthermore, I consider it to be extremely uncertain as to whether this proposal will be passed and, if it does, whether the Nordic Resistance Movement can be subjected to a ban.

Of course, a majority of politicians will likely vote in favour of stopping political dissidents; however, all the experts on the committee are said to have been against the banning proposal, while senior lawyers, political commentators and media pundits don’t seem to believe in it either.

There are also experts who believe that the government may be able to pass this new law, but that it won’t be applicable to any current organisations, including the Nordic Resistance Movement.

It will also have to go through the Council of Legislation, which has previously stopped the government’s idiotic proposals. Here I’m mainly referring to when the government proposed a new anti-terrorism law, which was tailored to stop the Nordic Resistance Movement. According to this proposed legislation, people connected to organisations that “in theory advocate for revolution” and are composed of so-called right-wing extremists should be convicted on terrorism charges and sentenced to several years in prison. The Council of Legislation rejected the proposal because it believed it was in violation of… freedom of association.

In order to constitute a racist organisation, said organisation must also engage in racist persecution of other groups (according to an exception in the Instrument of Government law), which the Nordic Resistance Movement definitely does not do. Here, the government believes that it is enough for individuals within an organisation to commit incitement to racial hatred in order for the organisation to be banned. This is far-fetched, extremely complicated and hardly in line with Swedish legal tradition.

In this context, it should also be noted that Morgan Johansson probably doesn’t even believe in this himself. It’s simply a case of his showing that he is loyal to his masters. If this whole thing goes through, it will be a bonus for them. If it doesn’t, the government can claim that they have done everything in their power to destroy the Swedish rule of law, but that its foundation was unfortunately too strong.

3. THE STRUGGLE CONTINUES – WITH OR WITHOUT A BAN

During this time, we have gathered people around us with the mentality to be able to handle such a situation, as well as building a strong foundation. When parliamentary weaklings believe that a ban will lead to the organisation “disintegrating with time”, it’s just an expression of their inability to relate to us.

The columnist Åsa Linderborg, who comes from a different tradition, has a much more accurate analysis: “If the Nordic Resistance Movement were banned, they would do as their sister parties in Germany have done; redefine and reorganise, or go underground. In short: they will make a mockery of the state.”

There are obviously short-term disadvantages that come with a ban, but also a number of advantages that, if things go right (or wrong, from the perspective of the system), might turn out to be a great leap forward for the movement.

In conclusion, we do not fear the regime’s threats to ban us. We will reorganise and come out stronger than before – as we always have. The struggle will continue – with or without a ban.