IDEOLOGY. Fredrik Vejdeland writes about how we can be victorious despite being a small minority compared to the system. 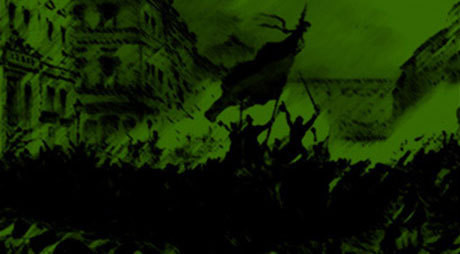 One of the topics discussed on Radio Nordfront #207 was the massive internet censorship and whether alternatives to Youtube/Twitter/Facebook/Google can compete with the globalists’ censorship factories.

Unfortunately, the subject ended on a bit of a black pill, with it being agreed that the power elite will eventually come to control the emerging alternatives and incorporate them into the system. People growing up now will be content with watching Netflix, as they do not have references from a time when the internet was free and one could find alternative information. To balance the debate a little, Martin Saxlind mentioned that we should run our own platforms while using established ones for as long as possible, while Max Rosenfors added that we are ultimately not dependent on competing on equal terms in order to win in the long run.

Both of them are completely right, but unfortunately the discussion ended there, with the problem formulated in more detail than the solution. This is an important discussion that should be revisited on Radio Nordfront at a later date, but it also deserves to be explored in written articles.

In this blog entry, I intend to continue where Max left off, as I believe it is important for everyone who wants to save our people and our race to understand that – even at the point when we come to power – we will not be a majority. My intention here is not to offer a recipe for victory (although that may be the subject of a future article), but rather to emphasise the importance of thinking along the right lines and looking beyond the perceived balance of power in our present situation.

Fixating on the current balance of power is always black-pilling, especially in our democratic age in which the population are infected with the democratic mindset, and in which strength is counted in votes. Many who have been indoctrinated by the democratic way of thinking – including those in the nationalist movement – believe that to reach ultimate victory, you must have 51 percent of the votes. Furthermore, half of the media, celebrities and so forth must be on our side. The balance of power is also calculated on an ethnic level, and because the racially foreign elements in the country are already around 25-30 percent of the population – and because many Swedes today have an interest in preserving the current system – an uprising seems very difficult.

If the balance of power is assessed in this way, with all these aspects taken into account, our struggle naturally appears to be totally hopeless. This is also what the system and its propagandists like to emphasise. The message to us is not “You are wrong because…” but rather “Look around you. It’s already over.” These unfavourable balances of power are also the reason why groups like the Sweden Democrats and other solely parliamentary alternatives are doomed to eternal adaption in an attempt to bring those who control the game to their side.

Related: Opinion: Nationalists should not overfocus on the parliamentary approach

But the struggle is only hopeless as long as we attempt to outcompete the system on its own turf and do not play our own game. We must drive home two things. Firstly, it is always (strong) minorities who effect revolutions. They can control large masses but do not necessarily need half the system or half the population behind them. Strong minorities are particularly successful in times of social deprivation and chaos with impending or ongoing civil war. This applies regardless of whether the system controls the actual majority of the population.

History confirms this. When the National Socialists came to power in 1933, they were able to join forces to form a parliamentary majority (which was not a precondition for a seizure of power), but they still did not have either half of the population or the system on their side. The largest newspapers, the “big tech” of the time, were still Jewish and/or opponents of the NSDAP. According to Jewish sources, the National Socialists did not even control three percent of the country’s 4,700 newspapers when they took power in 1933. The NSDAP’s most popular newspaper, Völkischer Beobachter, was admittedly quite large, but it was still far behind the pro-system media. The National Socialists thus controlled only a fraction of the flow of information, but the media at their disposal was sufficient to ensure that a strong minority, embodied in the National Socialist movement, could achieve victory.

Similar comparisons can be made with all other revolutionary movements, such as the Bolsheviks. Closer to our time, we can look at Golden Dawn in Greece, who grew at a record pace into a strong force – on the streets and in the national parliament – despite having the system and its propaganda factories against them.

This brings me to another point. When society is in chaos (and the example of Greece shows that not much chaos is required), the rules and the game plan change.

We should constantly focus on becoming stronger, better organised and gaining enough public support to be able to form this strong minority at the right time at a future stage. Strength is manifested in various ways, and when the situation is right and the minority is sufficiently strong, the problems discussed on Radio Nordfront will be more comparable to speed bumps. The example of the National Socialists in Germany shows that a strong minority trumps a weak majority. Or, to quote Adolf Hitler himself:

It must be clearly recognised that if a highly energetic and active body of men emerges from a nation and unites in the fight for one goal, thereby ultimately rising above the inert masses of the people, this small percentage will become masters of the whole. World history is made by minorities if these numerical minorities possess in themselves the will, energy and initiative of the majority.

What seems an obstacle to many persons is really a preliminary condition of our victory. Just because our task is so great and because so many difficulties have to be overcome, the probability is, that only the best kind of protagonist will join our ranks. This selection is the guarantee of our success.