ACTIVISM. Activists in Finland raised swastika flags and put up Tyr rune banners after Helsinki District Court ruled that the swastika is a legal symbol in the country. 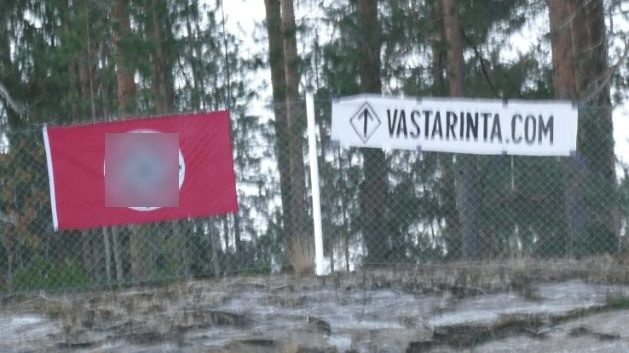 In 2018, the Nordic Resistance Movement was banned in Finland after a loophole in the freedom of association law was grossly exploited by the Finnish police. The organisation was also forbidden from arranging a demonstration on Finland’s Independence Day – which had been a tradition for several years. Although much of the verdict was unclear and open to interpretation at the time – with parts of it still being vague today – some of the statements made by the police indicated that the Tyr rune flag was banned in connection with activity by the Resistance Movement.

Instead of participating in the banned Resistance Movement march on 6 December 2018, all former members and supporters were encouraged to join the independent National Socialist demonstration, which was organised under the slogan “For Freedom!”. At the head of the march, where Tyr rune flags were usually held aloft during Resistance Movement demonstrations, swastika banners were carried instead, as they were legal under Finnish law.

After the march had progressed a few hundred metres, the police decided to contravene Finnish freedom of demonstration and expression by blocking the ongoing demonstration and forcibly confiscating the swastika flags. All of the flag bearers were arrested, together with the former leader of the Resistance Movement in Finland, Antti Niemi. The arrested men were suspected of breaking Finland’s nebulous “incitement to racial hatred” law.

At the end of August, the good news came that the accused were acquitted in Helsinki District Court, that the swastika is still legal in Finland, and that the police had therefore acted incorrectly. The verdict led to a debate in Finland, in which anti-White commenters lamented the decision, and individual police officers stated they will unlawfully seize swastika flags again if such demonstrations occur in the future.

As a contribution to the debate, anonymous former members or sympathisers of the Nordic Resistance Movement in Finland raised swastika flags around the country. In some places, green flags were also hoisted, and banners with Tyr runes and the Resistance Movement’s old web address Vastarinta.com (which is still online as a historical document) were put up. Green flags were previously used during the 2018 demonstration, together with the swastika flags.

Uncensored versions of the photos can be seen on Frihetskamp.net.