Home Ideology Opinion The importance of street activism and demonstrations

OPINION. Fredrik Vejdeland writes about activists’ reasons for joining the Nordic Resistance Movement and how street activism and large-scale demonstrations inspire people to take up the struggle. 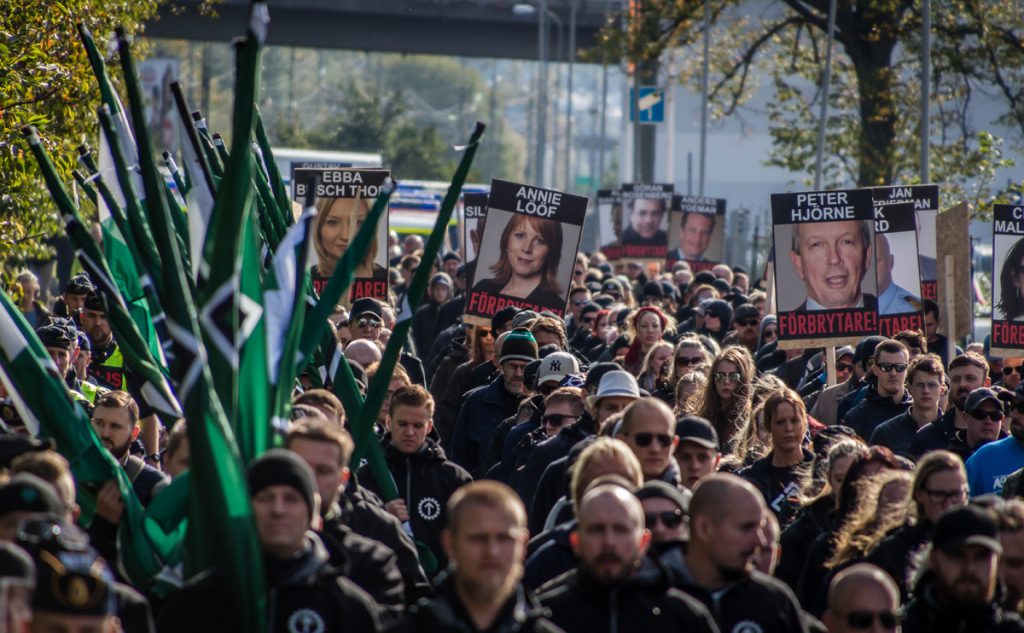 One advantage of radio is that it’s a medium which affords more scope to get to know your interviewee. Certain questions, and perhaps also certain types of interview, feel more misplaced in a text article than they do in a radio interview.

One matter I personally follow with great interest is when activists and members talk freely about their engagement, how they woke up and what made them finally join the Nordic Resistance Movement.

These conversations confirm that our large demonstrations and street activities serve as an effective recruitment weapon. Jimmy Thunlind mentioned this when he was a guest on Frontlinjen, Christoffer Runnholm said on NR Dalarna that he joined after the 1 May demonstration in Falun in 2017, and Tommy Hvit revealed on a recent episode of Nordic Voice that he joined after being impressed by the Nordic Resistance Movement’s demonstration in Gothenburg on 30 September the same year.

Naturally these people do not exist in a vacuum. There are many others with similar stories – people who I know and perhaps who you know too. Alternatively you might even belong to this group yourself.

I believe the process generally works something like this: Base activism (putting up stickers etc.) makes our existence – our name, our symbol, our goals in brief and our internet address – known to the rest of the world. From this awareness, sympathisers go to Nordfront or Nordisk Radio, where over time they become educated in important subjects like race and the Jewish question. This means that in due time they can relate to our cause on an intellectual level.

But being a passive consumer of our ideas and an active champion of our cause are two completely different things. Why should a Nordic man or woman, even one in agreement with everything we stand for, join the radical resistance when they already know in advance that it could be costly for them? This is where the large-scale demonstrations – or actions where we fight back against a hostile system – come in. It is public activism and the activists’ heroic behaviour on the streets which spur the idealistically minded person to finally summon up their courage and decide they too are willing to be part of the resistance. 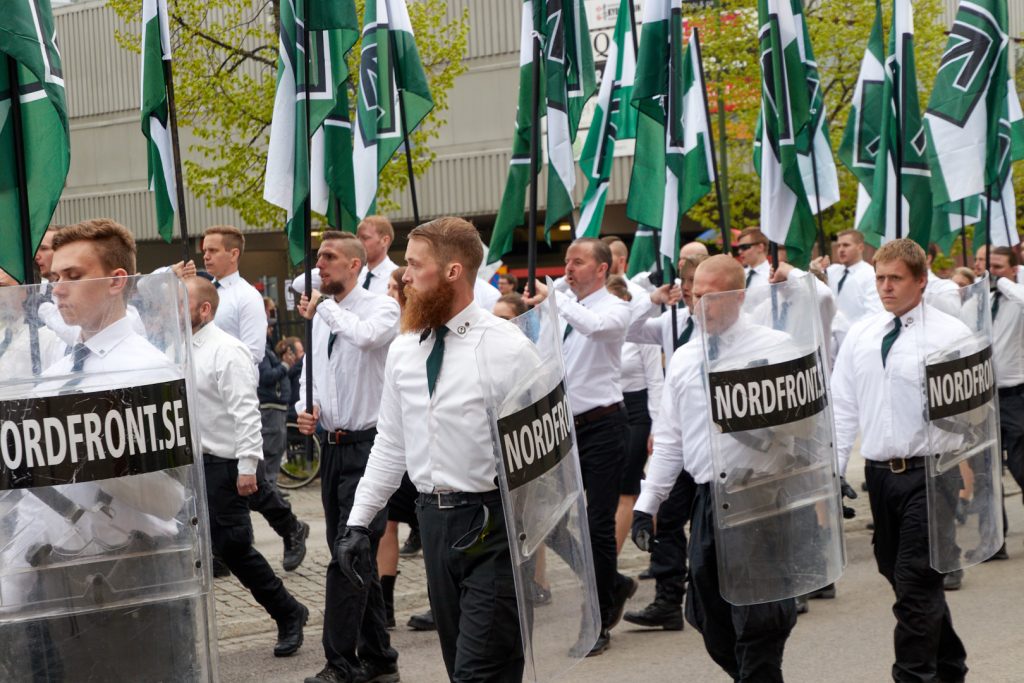 The Nordic Resistance Movement’s demonstrations are inspirational – so say Thunlind, Runnholm, Hvit and many more. The discipline, speeches, radical spirit and comradeship attract the small section of the population who want to fight for a higher purpose and unite with others who have also come to this conclusion.

It is interesting that Tommy Hvit names the demonstration in Gothenburg as his wake-up call – and he isn’t alone. The demonstration was the biggest nationalist gathering in Gothenburg in modern times, but it was also the first time we had an entire system against us, and where it became considerably harder to demonstrate – namely, a huge doxxing campaign, unprecedented police repression, violence and chaos, and the fact that the government interfered in the process and began demanding bans. According to our enemies, the demonstration was a failure, yet it was what caused Tommy Hvit to decide to join us. We have also grown in membership numbers since.

We have quite simply come to the point in our organisation’s evolution when actions which can be costly for the individual (prison sentences, doxxing in the media, police baton blows etc.) also generate new recruits for the struggle. Not because we necessarily win all confrontations with the system (for example, the deadlock in Gothenburg) but because we fight and because more and more people want to be a part of the struggle which they know will lead to total victory. Even if we’re not talking about masses of people, it’s still an incredibly healthy development.

Under Simon Lindberg’s leadership, powerful demonstrations have become a trademark of the Nordic Resistance Movement. Lindberg has raised street activism to levels we were never close to in the past. These massive, disciplined actions have made us known and discussed the world over, and today inspire much bigger sections of our people to act. 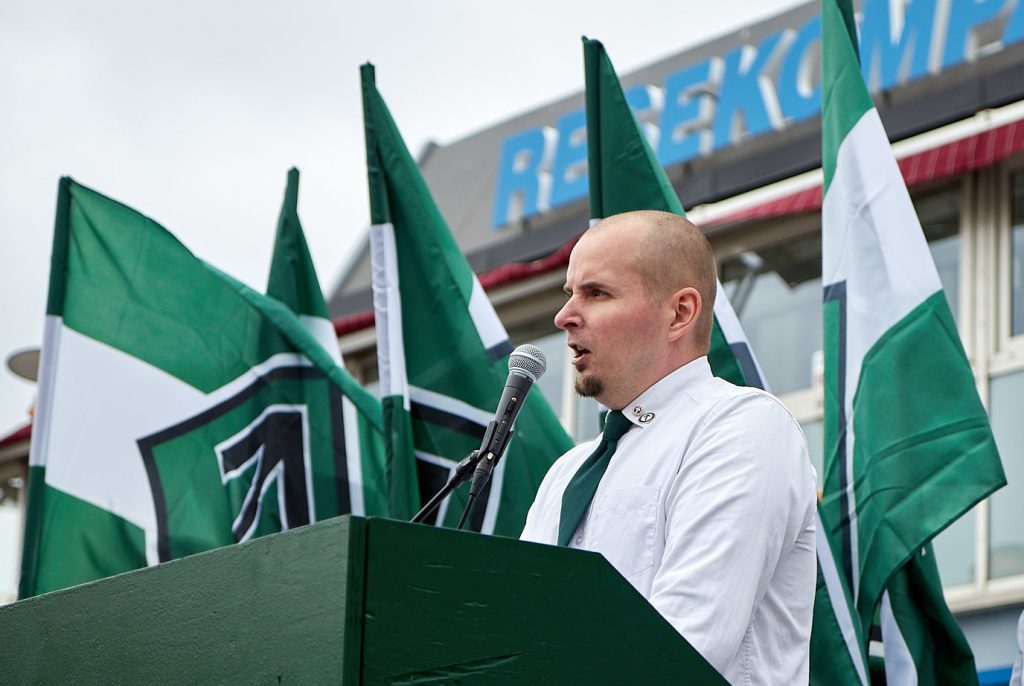 There are those who question the importance of demonstrations. Recently I’ve heard various extremely bourgeois arguments from people who should know better. One of these is that it costs money for individuals to travel to and from demonstrations. Some also believe that it isn’t right to provoke the system too much through public struggle, that it’s provocative in itself to show there is a resistance. But even if there is a kernel of truth in their reasoning, the alternative can never be to choose a mode of operation the system accepts and a path where you’re of no threat at all to the current system. That would simply be to capitulate.

What the bourgeoisie and liberals miss is that it’s the radical resistance that inspires people to join the struggle – not LARPing revolution in the woods and posing, but by pursuing genuine struggle out in the open with real enemies facing you. Not talking about the struggle, but living it.

Naturally the system has understood there is a danger in people coming together and uniting in powerful protests. The system’s lackeys fight tooth and nail to make the people accept current “developments”, and expend a great deal of resources on bans and censorship on the internet. What they want even less is for people to take action publicly. They certainly don’t want something similar to the Yellow Vests in France.

Consequently the system tries to sabotage the Nordic Resistance Movement’s demonstrations – by attempting to introduce laws of prohibition and via police chiefs who threaten prospective demonstrators from attending public events.

During our latest demonstrations, the system’s repression has succeeded in decimating public attendance. That is true. But it is also true that the robust core of activists, members and sympathisers who join our demonstrations has grown. Whereas just a few years ago we were between 50 and 100 men on demonstrations with no major blowback, now we can amass 400-800 men under the most testing conditions there are.

The public struggle – whether it’s large demonstrations or smaller leafleting sessions – is immensely important for the people to see there are men and women who dare to say things in the open, including more radical things than they believe themselves. Street activism inspires the right people to join the resistance but also motivates everyone to step outside the opinion corridor and cast off the self-censorship the system has imposed on them.

If the system succeeds in banning Swedes from demonstrating, we will conduct unannounced flash demonstrations with the same discipline and radical spirit, but there is no doubt the struggle will continue to be waged publicly – until there is no choice than to take other paths.

I will end this article by noting that street activism is not the only thing the Nordic Resistance Movement must be engaged in. Media and public awareness, spectacular actions, internal education, training, survival activities, lectures and social gatherings must also all naturally be included in a broad and effective organisation where the right person is in the right place.