RESISTANCE MOVEMENT. To coincide with the onset of the spring school term in Sweden, the Nordic Resistance Movement has started carrying out activities aimed at high schools around the country. 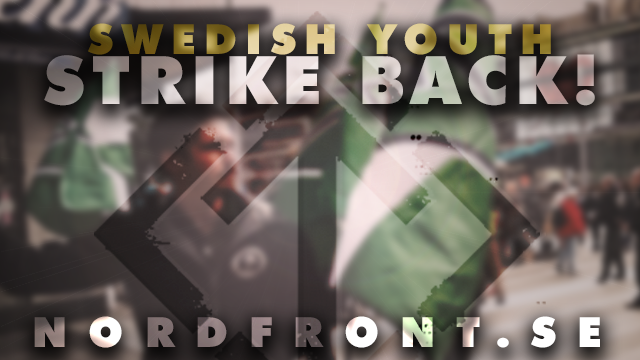 The Nordic Resistance Movement has welcomed pupils back to school after the Christmas holidays with activities aimed at high schools around the country. Stickers have been put up, logos have been sprayed-painted and leaflets have been distributed.

Nordfront has also interviewed Swedish pupils who regularly witness violence, threats and anti-Swedish behaviour at their high school. They tell of a highly politicised school with teachers who are avowed left-wing extremists, and where pupils risk being questioned by the headmaster and even getting suspended or receiving lower grades if they object.

Swedish youth will be hit hardest by the multiculturalism that previous generations did not prevent. They are also the future and will become tomorrow’s fighters and political soldiers. As such, activism directed at the youth is important in order to reach out and show the path to the organised resistance.

Organised and united we can write history and save our people from the fate our enemies and the traitors have planned for us.

It’s no good waiting and hoping someone else will solve our problems. Maybe your friends are waiting for YOU to take the first step and show the way!