ACTIVISM. During the autumn school holidays in Stockholm, youth members of Nest 1 took the opportunity to step up their level of activism. Here follows a report on the intensive week of activities. 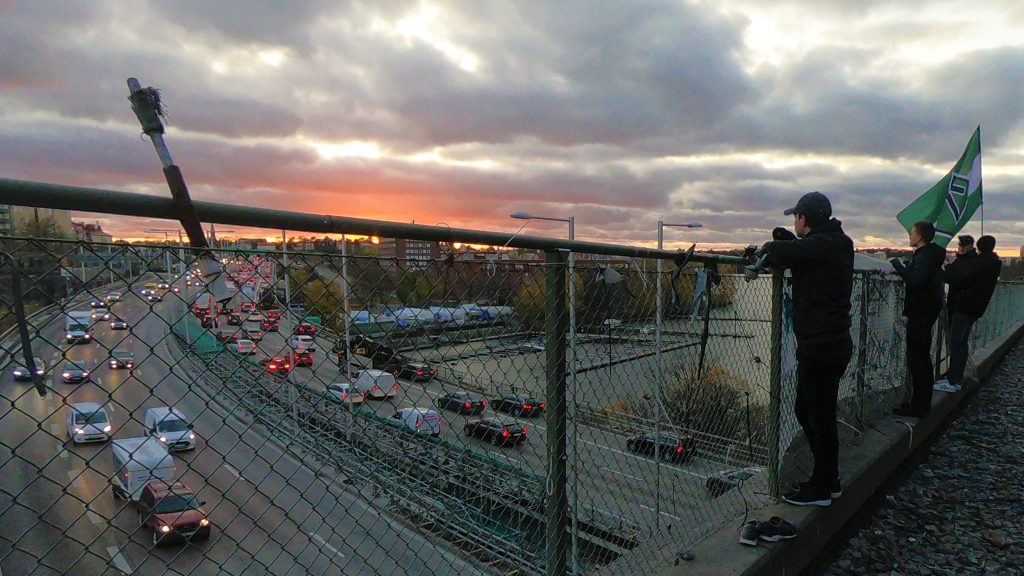 When autumn break starts getting closer, a large number of degenerate Nordic youth see an opportunity to drink, get stoned and sleep in to 11.30 every day. This was not the case for the Nordic Resistance Movement’s young National Socialists. The youth members of Nest 1 instead viewed it as an opportunity to further the struggle and conduct day-round activism that would reach as many as possible, while the average Joe continued to live his everyday consumer life. The autumn break – which is intended for students to rest and sit at home on the sofa – was thus a more intensive period than an optional school week would have been, with activities taking place on each of the seven days.

The week began with a public banner drop. Because the youth members were off school, they were able to conduct the action in the middle of the rush hour to ensure more people saw the banner. In just a short time, their message reached thousands of road users.

The rest of the week was mostly filled with basic activism, including stencil production, two spray-paint activities, two sticker activities and two leaflet distributions. According to some sources, autonomous activists were also present during the week, and at Halloween there were reports of Nazi pumpkins appearing in the Stockholm area.

Over the course of the week, the group of idealistic youth members ensured a five-figure total of Stockholmers received the Movement’s message. Via street activism, they didn’t just inform people about political matters but also showed them that the Nordic Resistance Movement are active in their local area and exist as a healthier alternative to the rotten modern society.

All Nordic youth who are unhappy with today’s societal developments are encouraged to join the Resistance Movement, where they will meet upstanding comrades and become part of the struggle for a better tomorrow.