ACTIVISM. Activists and members from Sweden’s Nest 8 held a series of banner actions in and around Västerås on Saturday, 21 November, much to the frustration of local police. 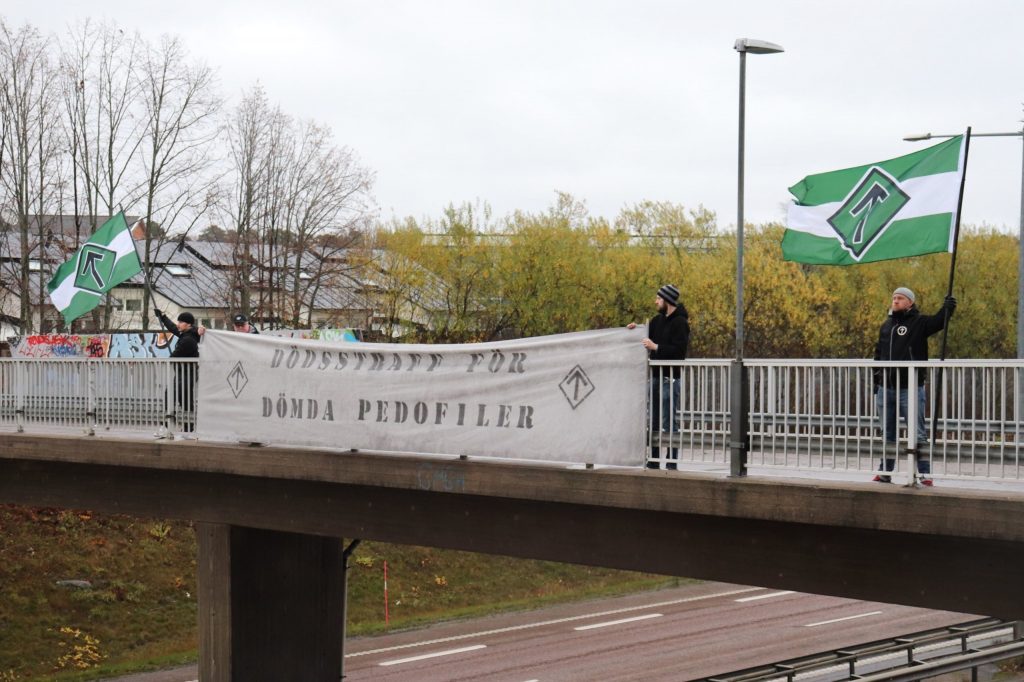 The group had originally planned to begin the day with a public leaflet distribution outside a shopping centre, but the bitter autumn weather with its ice-cold winds and persistent rain sparked fears of ruined leaflets and a dearth of people willing to stop and talk politics.

This prompted the nest chief to re-strategise. Where would people be found on such an overcast day? Why, in their cars, of course! The traffic was busy on the major routes in and out of Västerås, so the group brought a large banner, flags and flares and positioned themselves on the footpath on one of the bridges over the E18 outside the city. The message on the banner for the day was “The death penalty for convicted paedophiles”, and a large number of car and truck drivers showed their approval by beeping their horns and giving the thumbs-up.

After a while, the men packed up their equipment and moved to another bridge in central Västerås. Here the traffic was even denser, and there were plenty of beeping horns and waving drivers. Then, in the middle of the greetings and well-wishes, a police car suddenly showed up on the road under the bridge. The car came to a halt, and the officers inside appeared to confer with higher-ups about how this brazen threat to the democratic society should be dealt with.

After the police car drove away, the activists decided to relocate once again. More police cars appeared on the way to the next bridge, and it soon became clear that the authorities had mobilised. This was later confirmed by the web edition of the local newspaper Vestmanlands Läns Tidning (VLT), where it emerged that Västerås police received reports of “Nazi demonstrations” on not just two but at least three bridges in the Västerås region.

Västerås police dispatched several patrols to seek out the thought criminals, but without success. The police press spokesman Daniel Wikdahl expressed his frustration to VLT:

“They’re all over the place. We see people on the bridge by the turn-off to the hospital. Then they’re reported on the E18 on a pedestrian bridge. When we arrive, there is no one there.”

After another game of cat and mouse, the nest chief decided that the action had achieved its intended effect and gained sufficient attention. Then comrades then enjoyed some uplifting social time before travelling home.