ACTIVISM. Sweden’s Nest 1 conducted multiple “Love Your People” banner drops in and around Stockholm in February. 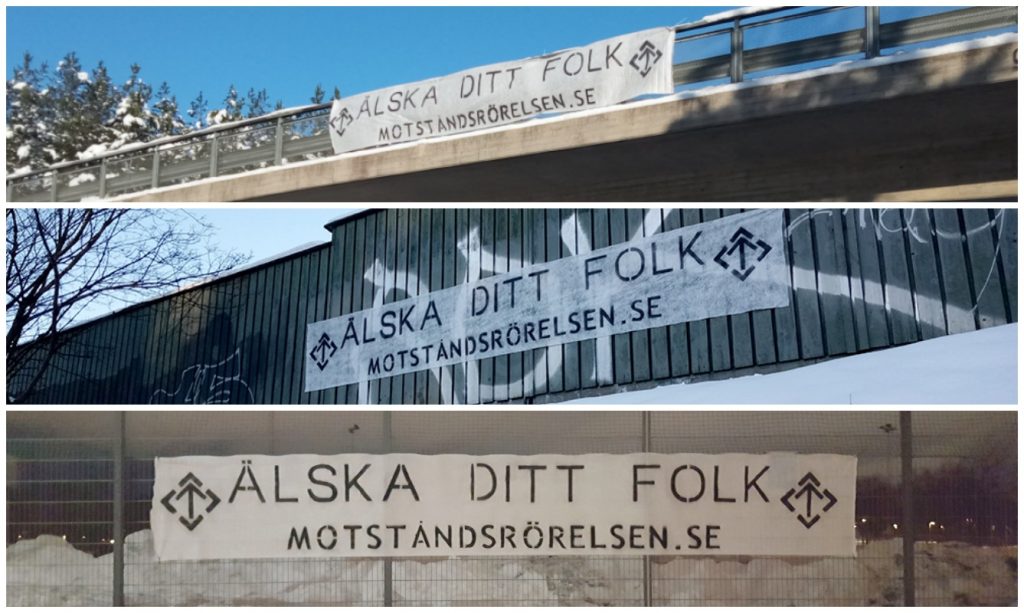 Sweden’s Nest 1 continued their Love Your People banner campaign throughout February, hanging up banners in numerous places in Stockholm and other locations in the Nest. The banners feature the simple message “Love Your People”, along with the address of the Swedish branch’s official website, Motståndsrörelsen.se.

See some of the activism reports below.

Several “Love Your People” banners were placed in Täby and Österåker, northern Stockholm, on Monday, 1 February.

A number of banners were put up in Botkyrka and Södertälje on the evening of 1 February.

Members hung up five banners in the municipalities of Haninge and Huddinge on the evening of 1 February.

Three banners were placed along the Essingeleden motorway in Stockholm to coincide with the morning rush hour on 2 February.

Banners were placed in Södertälje in the early morning of 2 February.

Banners were hung in Stockholm (including Bromma airport) and in Märsta, Sigtuna Municipality, on the morning of Thursday, 4 February.

Four banners were placed in Stockholm and Täby on the afternoon of 6 February.

Comrades from Nest 1 placed four banners along the E18 road on 6 February.

Banners were put up in Stockholm and Nacka in the ongoing “Love Your People” campaign on Thursday, 11 February.

Nest 1 went to Sergel’s Square in central Stockholm on the morning of 9 February and put up two banners featuring the “Love Your People” message. There was no “lack of resources” for Stockholm police on the morning. The first patrol car appeared after banner number two was in place, and shortly after the activists left, no fewer than five police cars were seen searching for them. Despite this disruption, the activity was successful, with many Stockholmers seeing the healthy message in the morning.

Several banners were put up in Täby and Vallentuna municipalities on the morning of Saturday, 13 February.

Activists from Nest 1 met in the early morning to put up banners on Friday, 5 February. The first was attached to a rock face along the E4 road near Södertälje. In order to fix the banner in place, the activists first needed to trudge through snow-covered woodland, before descending the cliff edge with the help of a rope and harness. Once in place, the banner enjoyed good visibility along the motorway.

Afterwards the activity continued, with more banners being put up on animal fencing along the E4.

Nest 1 members placed “Love Your People” banners in Nacka in the early hours of 17 February.

A number of banners were placed in Stockholm and Botkyrka during the morning rush hour of 17 February.

Banners were hung up in central Sundbyberg, Spånga and by an IKEA store in Barkarby in Stockholm County on 17 February.

Nest 1’s “Love Your People” campaign continued on Friday, 26 February, with banners being put up in Sollentuna Municipality and Upplands-Väsby Municipality, north of Stockholm.