SOCIAL ACTIVITY. Nest 8 holds a monthly meeting with a lecture from a visiting comrade.

On Sunday the 7th of July, comrades from Nest 8 came together for the meeting of the month. The day commenced with a cup of coffee, and the comrades had the opportunity to socialize, check out the nest’s very own library as well as the nest’s own activist shop.

Later, the leaders of the members’ and the activists’ groups had the customary meetings with their divisions. When the meetings were over, it was time to enjoy lunch composed of meat and cooked potatoes with cauliflower sauce, followed by watermelon for dessert. It was now time for the highlight of the day: a presentation on political activism from Nordfront’s editor-in-chief, Martin Saxlind. The lecture was very interesting and hardly anyone was left uninspired. 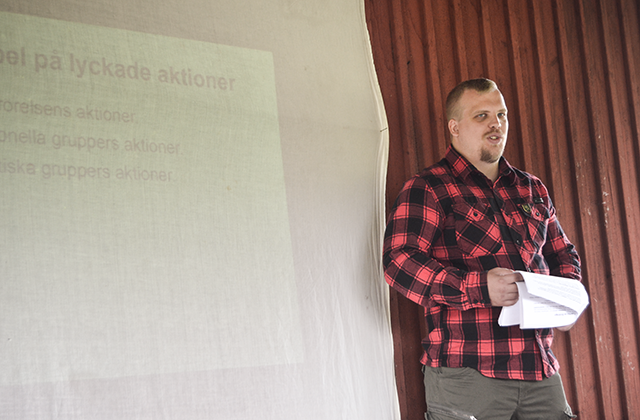 When the lecture was over, the comrades headed home. The police, however, stopped one of the cars and harassed the comrades in a fruitless search through the vehicle – where naturally nothing of importance was found. Overall, it was a great day during which new plans were forged for the fight for freedom of the Resistance Movement’s eighth Nest.