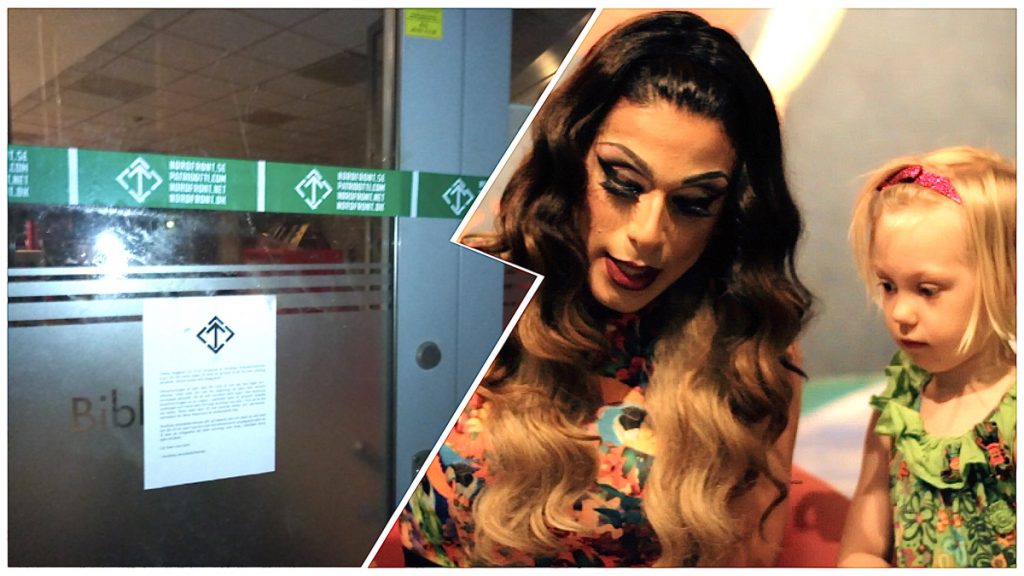 Sweden’s Nest 1 cordoned off public venues hosting subversive activities in the localities of Nykvarn and Täby on the night of 17 October, which generated a lot of attention in the media.

One of the activism reports originally posted on the Resistance Movement’s Swedish website reads as follows:

Comrades from Nest 1 cordoned off a library in Nykvarn on the night of Saturday, 17 October. The action was in response to a planned “story time” at the venue, which would feature adult men dressed as female prostitutes. The event was aimed at small children, with the stated purpose of making them question gender norms.

The Nordic Resistance Movement stand on nature’s side and will always fight against the subversive forces that attempt to brainwash our children. 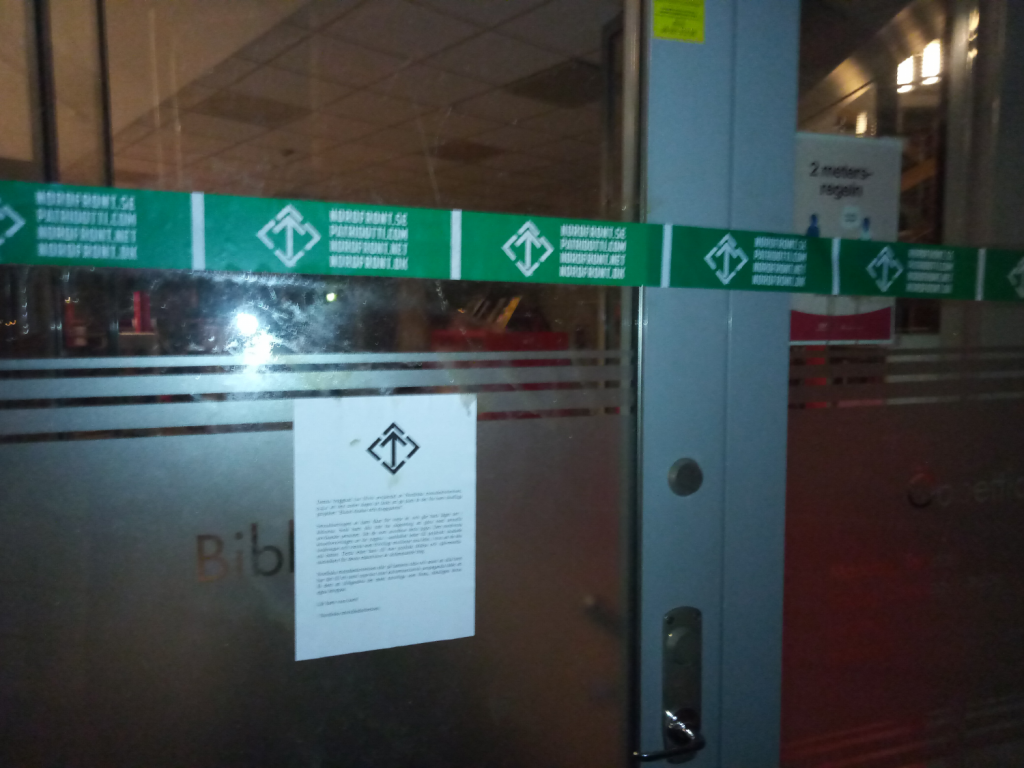 This proves that the Resistance Movement’s actions forced these individuals to censor themselves in order to avoid turning public opinion against them.

The fact that a symbolic action like this attracted so much attention clearly shows that the system and media want to protect these “story times” at all costs. This is why they are attempting to demonise all such criticism as “hate” and “attacks” – especially given that criticism of “drag queen story times” is something many regular Swedes agree with. The virulent headlines are a sign that the perverse, anti-Swedish media is alarmed by actions like these.

The Nordic Resistance Movement is a National Socialist organisation that fights for the Nordic nations and their people. As such we oppose and combat everything that is harmful to our people; for example, mass immigration, the homo lobby and other movements whose aim is to dilute, degenerate and/or oppress our people in one way or another. However, these subversive and injurious forces would have never gained a foothold without decades of propaganda. It is this propaganda that has paved the way for the society we live in today, and which is now displacing our people’s last, most natural instincts; namely, the instincts and understanding of who we are and to which genders we belong.

Destroying this instinct in older generations would prove difficult, as the majority of adults cannot be persuaded into questioning their own gender. Therefore this heinous propaganda is aimed at children – very young children who stand bewildered and helpless before it.

This is not the first time the Resistance Movement has acted against subversive activities that seek to sexualise our children and young people.

Here is a selection of actions directed at the homo lobby:

Photos from actions against subversive activity:

Nor will this be the last time the Nordic Resistance Movement will act against these kinds of hostile forces.

Here are some articles that explain in more depth why the Resistance Movement is the last outpost in the struggle against the homo lobby, how known advocates of the so-called LGBTQP movement are convicted paedophiles [Swedish], and how people with deviant sexuality continuously advance their positions [Swedish].

It’s time to realise that the media, the system and all its institutions actively work against your interests and your children’s interests. The children subjected to these attacks and propaganda don’t live on the other side of the world in some crazed sect. No, it’s our Nordic children who are being subjected to this in our own country, in our own schools, in our libraries and in our nurseries.

If you haven’t yet joined the Nordic Resistance Movement, how long are you going to wait? Must these perverse, dressed-up witches come to your own son’s school and preach their lies about rootlessness and asexuality before you begin acting against the madness?

Join the Resistance movement for a future in which our Nordic children can grow up in safety, free from attacks, free from decadence and misery, and become healthy, happy and free men and women in the Nordic Nation.