STRUGGLE. A member of the Nordic Resistance Movement reflects on the way the struggle has changed in recent years and how bright the future actually looks. 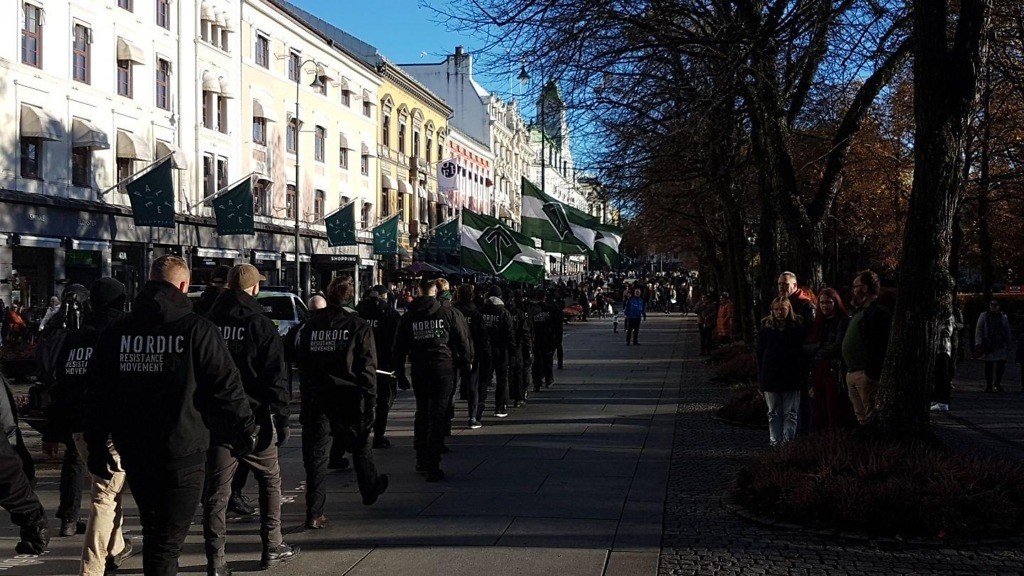 Some time has passed since the Resistance Movement’s effective flash demonstration in Oslo, and a few reflections can now be made. Firstly, it’s clear that people have become increasingly receptive to our revolutionary message in a completely different way compared to a few years ago. When the public are taken off guard, as they were in Oslo, without having first been fed via the filtration channels of the TV, radio and newspapers – which work in tandem to intimidate them – and instead come face to face with the Resistance Movement and National Socialism in an unadulterated form, the reactions – although not one hundred percent positive – are not of outright disassociation either.

What has also become more evident recently is the system’s panic when National Socialists hold public meetings and unannounced marches on the streets. The system feels a palpable fear at the prospect of a greater number of people stopping to take leaflets and listen to the National Socialist message.

We know that street activism does not always mean activists are met by smiling faces and happy cries, but even so, there is a great interest in the Resistance Movement and our message. The number of people who shout derogatory slurs when we take to the streets has reduced significantly in recent times. This was especially observable in Oslo. Judging by the reactions, the common man and woman are on their way to opening their hearts and minds in our favour. Many people show a marked newfound interest in what we have to say.

This is a natural and completely logical development that is a direct result of persistent activist work, but also the violent and negative consequences of the mass invasion of racial aliens into our Nordic countries. People increasingly understand that the multicultural paradise politicians initially promised only existed in the foolish minds of those who championed the replacement of our people and the transformation of our societies, before they devolved into pure hell.

The Resistance Movement finds itself in a situation where greater success could be much closer than we previously realised. Hence the new draconian laws recently voted through by the system. The globalists’ puppets know very well that regular men and women never wanted the grim reality of the multicultural hell in our Nordic cities today. When people are reminded of this brutal reality in practically every neighbourhood, it scares them to the core.

In this context, we present a message that people previously recoiled from as if it were a flame, but which now no longer feels as alien and threatening. On the contrary, more and more people are beginning to understand that the Resistance Movement offers an ideal alternative and a concrete solution to this untenable situation. The longer the chaos continues and the more extensive it becomes – in combination with our continued struggle – the more attractive we will become to the public.

The smiling people we met on the streets of Oslo – and on a daily basis in other cities around the North – show that persistence pays off. The system has begun to lose face, and in future it will become increasingly desperate, as the truth starts catching up with it. When the public, albeit a little tentatively, begin to turn away from the illusion of democracy as the perfect model for society and show interest in the Resistance Movement, it is deeply frightening to those in power.