FIRST OF MAY. Markus Larsson summarizes both of the Nordic Resistance Movement’s First of May demonstrations, one of which unfortunately deals all too much with the police’s (lack of) efforts. 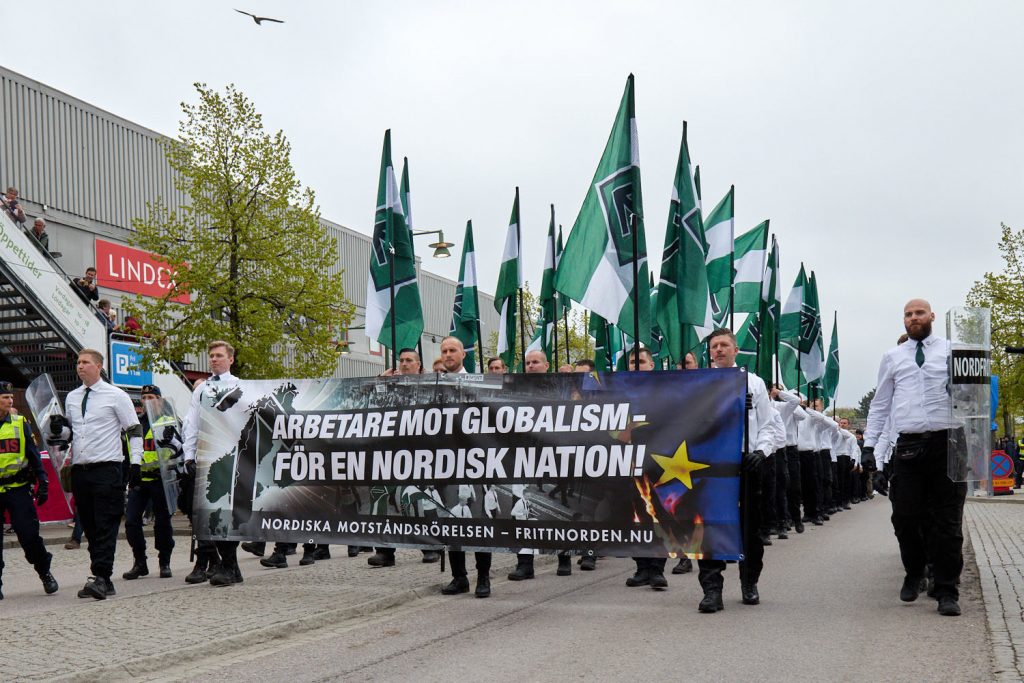 For the second year in a row, National Socialists gathered in Ludvika to demonstrate for the rights of Nordic workers on May 1st. Unlike last year, there was considerably nicer weather this time around: 12-13 degrees with some periodic warming sunshine, what more can you ask for!

Over 160 people gathered in Dalarna on Wednesday. Among these were a number who had travelled quite a distance to be able to participate in this year’s Nordic Resistance Movement demonstration. For example, there was a sympathizer all the way from France, Yvan Benedetti, who brought some comrades to support the Resistance Movement.

But unfortunately, it wasn’t just National Socialists and sensible people in Ludvika this day. For example, the media’s current mascot, Greta Thunberg, went there, apparently to take a nice selfie in front of a whole bunch of beautiful Tyr Rune flags waving in the wind. 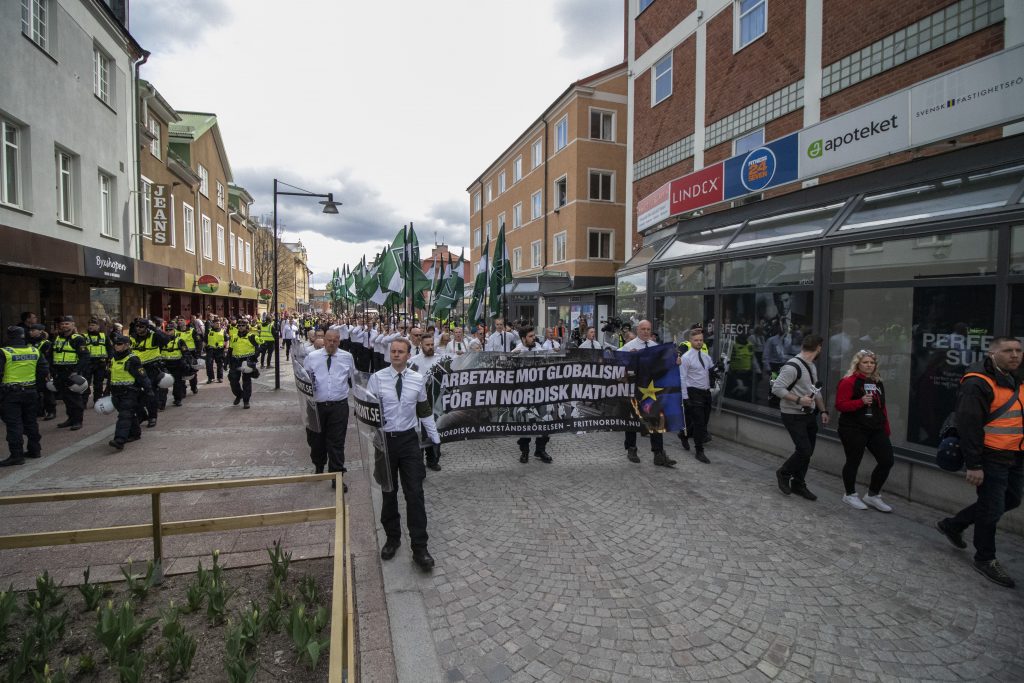 Another gem who had decided to show up was the Center Party’s leader, Annie Lööf, the globalists’ pet lackey. Bilderberger Annie is just one of many party leaders who continue to lie about and harass the Nordic Resistance Movement to appease their globalist masters.

According to SVT, Annie Lööf felt “such an incredible anger” that the Resistance Movement could hold a constitutionally legal demonstration. According to Expressen, she also thought it was “an absolute disgrace of human dignity, democracy and decency” that people with different opinions are allowed to speak. To Expressen’s live TV, Annie Lööf also said that she wants to ban the Nordic Resistance Movement. Naturally, she did not get a logical follow-up question from the reporter about how she can claim that she cherishes democracy while at the same time wanting to ban dissenting people from organizing themselves.

The march to Garvarn Square, where the speeches were held, went quite nicely and easily, despite some leftist clowns’ incoherent screaming. One lovely individual attempted to block the permissible demonstration by standing in the way, and was promptly removed by the police. Later, the police also removed some counter-demonstrators who tried to disturb the speech using megaphones. 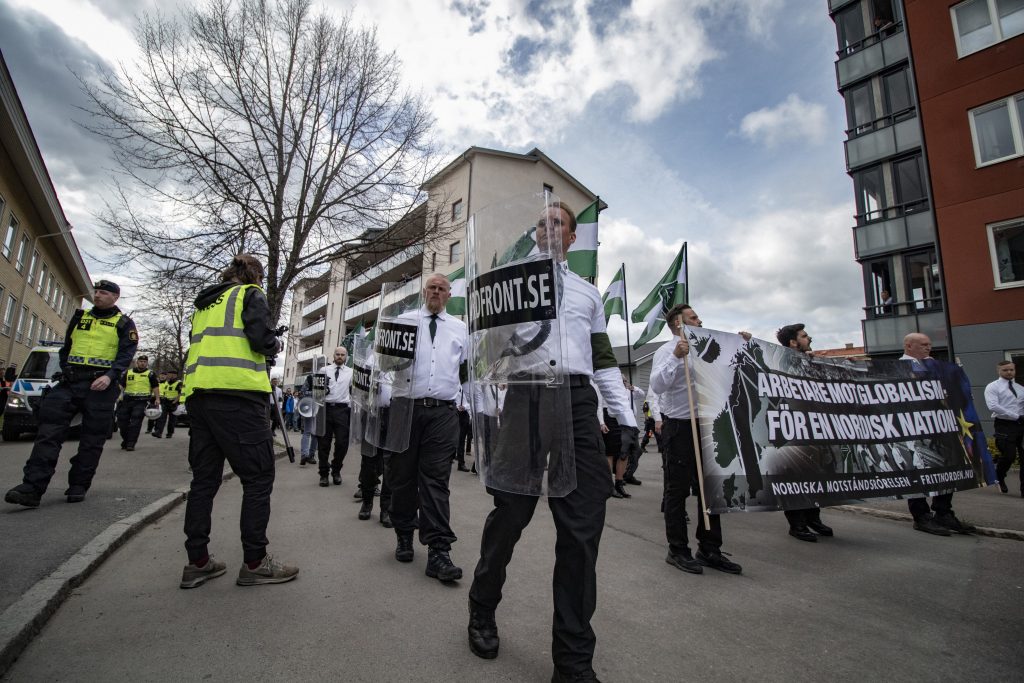 Once in place at Garvarn Square, master of ceremonies Henrik Pihlström welcomed everyone. The speakers for the day were Pär Öberg, Robert Eklund, Simon Holmqvist, Daniel Nordberg, and Jimmy Thunlind.

Besides these, the previously mentioned Frenchman, Yvan Benedetti, also made a short guest appearance on stage. 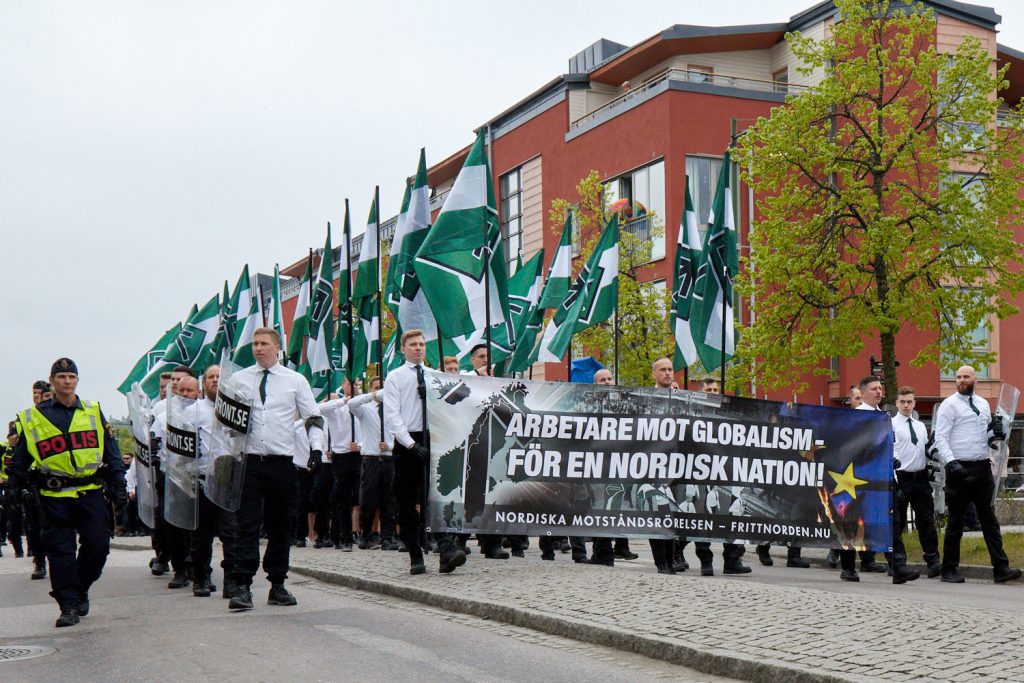 Kungälv has always had a different mood than Dalarna, at least with respect to the relationship between the Nordic Resistance Movement and the police. The now notorious Police Chief of Greater Gothenburg, Erik Nord, has been spending most of his time these past few years trying to throw wrenches in the gears of the Resistance Movement’s basic rights to demonstrate and spread our views.

The best example is the demonstration in Gothenburg on September 30, 2017, when the police’s plan to conduct mass arrests of demonstration members failed thanks to the Resistance Movement’s resolute action throughout the day. With this memory fresh in their minds, most demonstration participants were anticipating police efforts to keep the peace to be minimal.

Despite this, the atmosphere was good during the gathering before the demonstration. Even representatives from the Danish, Norwegian and Finnish branches of the organization joined; and among the civilians, people had travelled as far as from Italy to attend.

Just as in Ludvika, some opposition also travelled to Kungälv to virtue signal and show their contempt for freedom of speech. Two of these were the Minister of Culture, Amanda Lind (Moderate Party), and the Minister of Social Affairs, Lena Hallengren (Social Democrats). They were there on behalf of the government to inform everyone about the government’s persistent efforts to ban white people from protesting the ongoing ethnic replacement.

By around 13.00, roughly 270 demonstration participants were ready to leave the famous biscuit factory, towards the square where the speeches were to be held. The march went without major incidents, except just before arriving at the square. The police let the violent leftists come very close, and they proceeded to throw some fireworks at the demonstration procession, which created a little trouble for a short while. It is also noteworthy that the police allowed the reds to throw fireworks and explosives at a group of mounted policemen without intervening (hurting animals is something that leftist extremists regularly do).

Once inside the square, a podium and loudspeaker system were erected, and MC Peter Albinsson welcomed everyone and introduced the speakers. Unfortunately only four speakers of the planned five were available, due to illness, but those who were present were, in order, Sebastian Elofsson, Fredrik Vejdeland, Simon Engelin and the Nordic Resistance Movement’s leader, Simon Lindberg.

Around the square, outside the police barriers, a rather large audience had gathered, an estimated 500-600 people. More than half of these looked to be regular residents of Kungälv, who were probably there to listen to the speeches without getting caught up in violence. Listening to the speeches, however, was sometimes difficult because of the noise that the counter-demonstrators made.

To disrupt a licensed demonstration is, by law, illegal, and the police had every opportunity in the world to remove these disturbing elements so that ordinary people could listen to what the Nordic Resistance Movement had to say and thereby form their own opinions. However, it is clear that the chief priority of the police is to destroy as much as possible of the Resistance Movement instead of prosecuting actual crime – something that (again) was proved after the demonstration, on the way back to the gathering place.

Shortly after the demonstration, participants went back towards their cars, and the first confrontations with the violent leftists took place. Although the police had a considerable strength in place, they again let the armed and masked reds come within a few meters’ distance, where they could spit on and throw things at demonstrators. When the shield-bearers proceeded to protect the procession, the police decided to intervene and protect the violent leftists and attempt to arrest some members of the Resistance Movement. They used batons and pepper spray, mostly towards Resistance members. 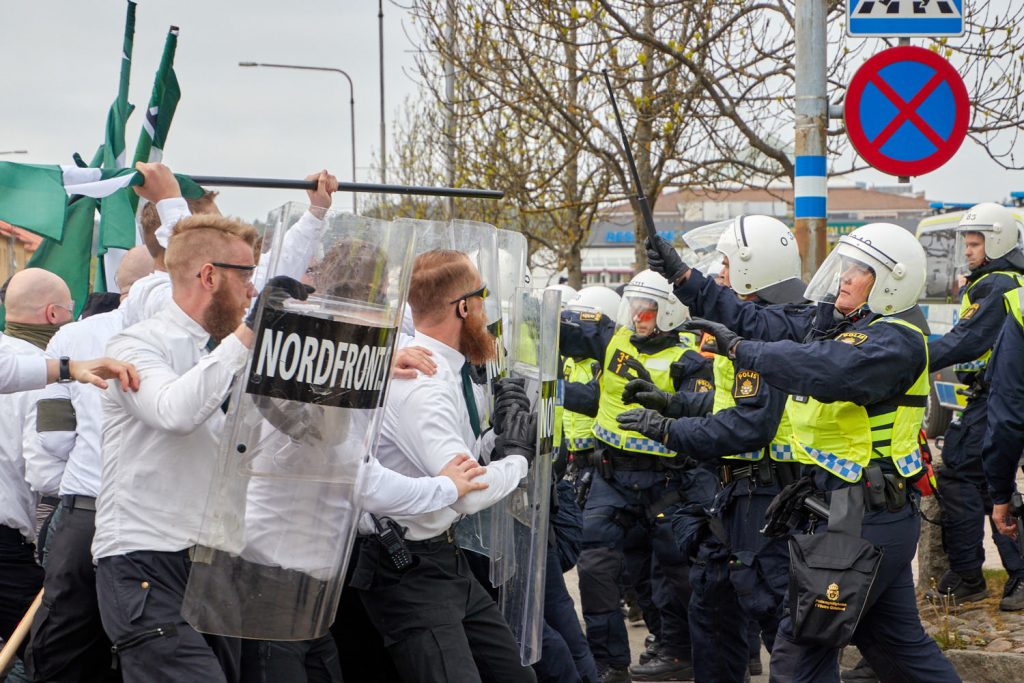 While the white shirts were occupied with protecting one side of the procession, the police left a large opening between the police vans on the other side. This allowed further attacks from violent leftists; the police let them within a few meters to throw bottles, stones and other projectiles. To the surprise of the police, no members of the Resistance were seriously injured, but the situation could easily have been much worse. That it wasn’t was largely due to the courage and sacrifice of Resistance security forces protecting the demonstration participants from both police and left-wing violence. Many thanks to you all!

Ultimately, about twenty people from the Resistance Movement were arrested or detained, but the vast majority of demonstrators could eventually return to the cars. Then everyone was welcome to an after-gathering, where good food was served and everyone could discuss the day’s events.

Nordfront asked some questions to Simon Engelin, who both arranged the demonstration in Kungälv and spoke during the day.

What do you want to say to those who came to demonstrate?

I want to thank everyone who came because they have shown their courage, and because they show that May 1st is an important day to remember our people’s hard struggle and to honour the Nordic worker.

Was there anything you think was extra positive about the day?

I had the opportunity to meet several locals who I have not met before as they chose to join our demonstration. Another positive thing was all the good speeches.

Is there anything we can do better next time?

Unfortunately, we did not have the opportunity to conduct a real sound check when we rigged up the sound system, so the volume was a little low. There is potential for improvement for the next demonstration.

What do you think of the police effort during the day?

It was the worst police operation I have ever experienced.

Yet again, the traitor Erik Nord and the Gothenburg police force have shown they are investing heavily in destroying as much as they can of the Nordic Resistance Movement – to the extent that they are ready to commit serious violent crimes to achieve their goal, either themselves or via proxy (i.e. the violent left).

And also again, the Nordic Resistance Movement has successfully carried out its demonstrations, and shown that we will not give an inch to the system’s oppression and violence. 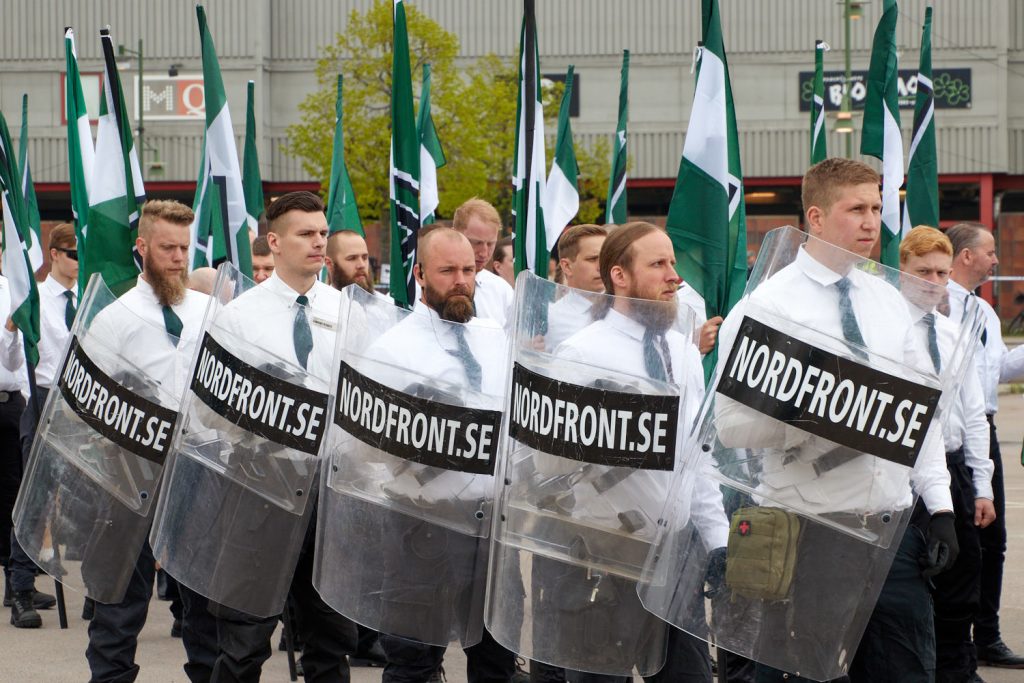 The Nordic Resistance Movement is the organization that speaks for Nordic workers. Join the ranks of true workers’ rights and honour Nordic workers with us on May 1st next year!